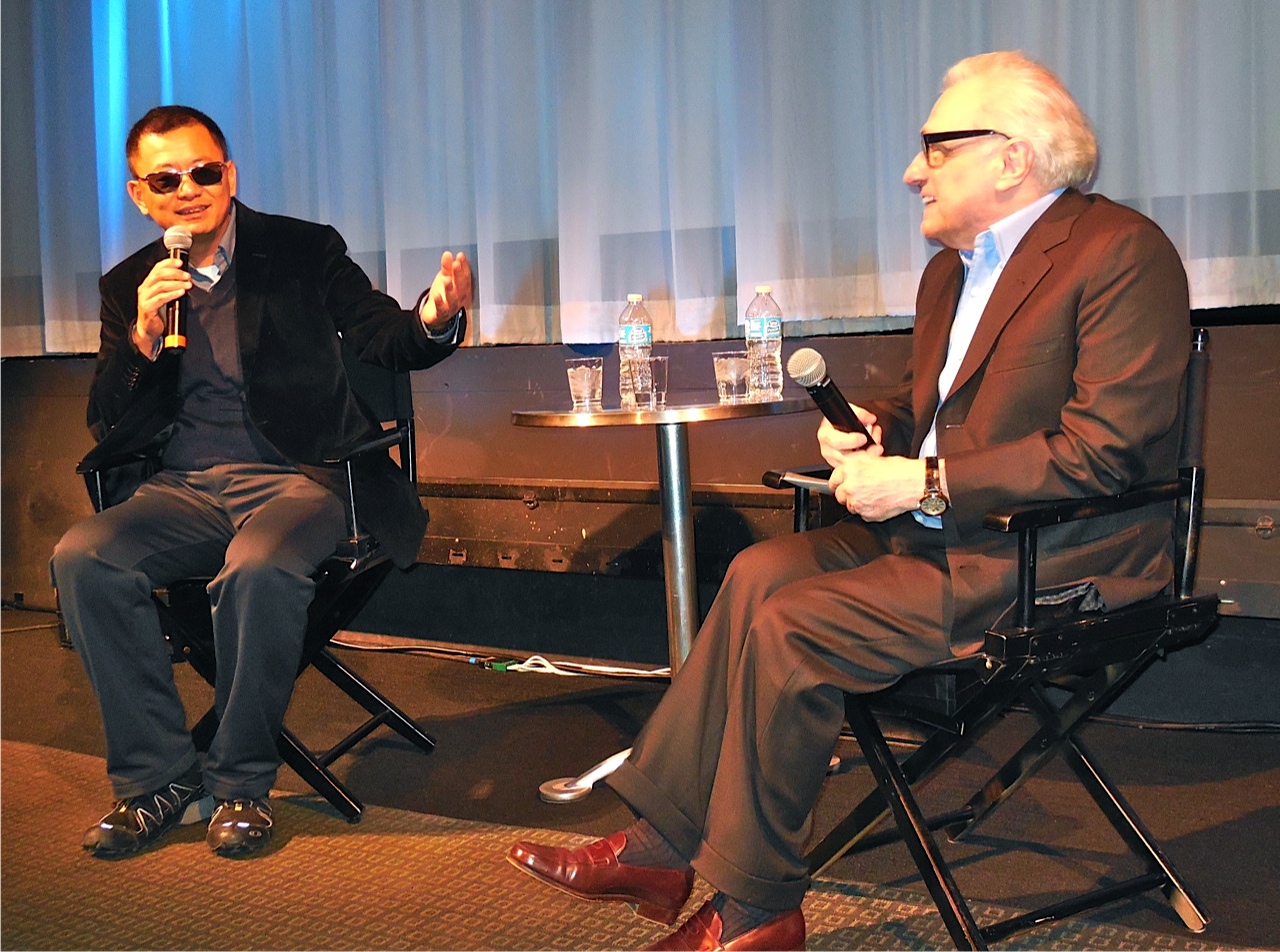 Just before taking off for the Golden Globe, Martin Scorsese took time off from promoting “The Wolf of Wall Street” to champion another film, global art-house director Wong Kar Wai’s “The Grandmaster,” which has been Oscar shortlisted for best foreign film. (“Scorsese is so passionate about “The Grandmaster” that his name presents” appears in the film’s credits.)

(Harvey Weinstein also attended the screening, which took place Wednesday night at Lighthouse International on the Upper East Side. The Weinstein Company is the U.S. distributor.)

How many times in your life do get a chance to hear Martin Scorsese conduct an interview with another great director? It was a film nerd’s delight, and nobody seemed to have a better time than Scorsese.

The Q&A between Wong and Scorsese that followed the film was less an interview than a conversation and chance for the directors to admire each other’s work. They seemed to compare notes. Scorsese said he’d seen “The Grandmaster” twice and praised the technique, photography, fighting. He was as manic and enthusiastic as any film student.

Wong talked about the grueling production schedule, the inclement weather and the fight scenes. The shoot was supposed to take six months but lasted three years. Two years before that the lead actors started training with martial arts masters. Tony Leung plays the title character of Ip Man, revered in martial arts circles as Bruce Lee’s teacher. Ziyi Zhang (“Crouching Tiger, Hidden Dragon”) portrays the daughter of a grandmaster, who is a master of a technique called 64 hands, but cannot pursue martial arts because of her gender.

Of making his first his first kung fu film, the “In the Mood for Love” director said, “I’m a big fan of martial arts but I never actually had a chance to practice, so to be able to understand this world it took me three years to travel across the country to do interviews, to attend demonstrations. I think I communicated with more than a 100 masters.”

Scorsese hung on every word.

“I still remember one morning I went to a small town in the center of China,” the director said, “It’s very cold. It’s five in the morning. I was supposed to meet a master there,” Wong Kai explained. “I came to a small train station, outside I see this man with his students, and basically the youngest is 55 years old.”

Scorsese threw his head back and laughed.

Wong Kai explained, “The martial arts masters can only focus on the practice on this art when they retire, so they’ve been doing it years, not for money, not for fame, but only for passion, so I think this is something that teaches and inspires me.”

Scorsese wanted to know more about the fight choreography, and the actors and what a normal day or week was like for them. “Basically they are very fine actors but they never practiced martial arts before,” Wong said. Leung and Zhang Ziyi trained with actual trainers for two years before shooting even began.

Wong worked with renowned fight choreographer Yuen Woo-ping and explained to him that he wanted the fighting to be authentic, with no wires, no flying and no special effects. “He looked at me and asked, ‘Are you serious’?” Wong laughed.

When Scorsese asked Wong to talk about his fight sequences, it turned into a magic moment for film lovers.

“It’s a very hard process to do the action,” Wong said. “In fact, when we’re doing three or four choreography sequences, I always look at your scene in ‘Raging Bull,’ because I think that’s one of the best action scenes made in the history of cinema. There’s no trick,” Wong explained of the big fight scene at the end of the film. “Basically it’s a cinematic journey, captured purely by camera and movement and action.”

“Amazing!” Scorsese laughed. “I didn’t realize that. Wow!” he said modestly, lowered his eyes and fumbled for a moment.

Leung was 47 when they started the movie, their seventh movie together. The director knew Leung was a big Bruce Lee fan, “and when he told him he wanted him to star as Ip man, he said, ‘Good,’ but I said you have to learn this hand-to-hand combat, there won’t be a double so this means you’ll have to do some serious training.” The actor broke his arm twice in rehearsals but soldiered on.

“To be naïve again,” Scorsese said, “you mean every move of the feet, that’s done by the actors, the way they deal with the martial arts in the picture?” Scorsese added, “I read an interview with Tony Leung in which at one point he told you he was going to die and you said, ‘You must go on, and he did.’’ Leung, who said he was an analog guy, said, “The only thing in this film which is digital is the train, because I cannot ask Zhang Ziyi to fight in front of a running train. If it were Buster Keaton, it’d be fine.” The audience laughed.

It turns out the biggest challenge in making the film was the cold weather and snow.

“Last night when I get into New York the snow reminded me,” of the shoot, Wong said. “We spent two months over there in a very remote station, and every night the weather is as cold as last night.”

Scorsese wanted to know about the difficulty of the set ups for the fight scenes. Wong said they could only two or three set ups. “Each shot has to be done properly because it’s also a dance between the action, the cast and the camera so it’s extremely hard.”

Of the movie’s climactic fight scene in the train station, Scorsese enthused, “Extraordinary achievement. It really is. That’s something that can only be film, the essence of cinema.”

Wong turned the praise around to Scorsese and asked how long it took to film the fight scenes in “Raging Bull.”

“We had planned four weeks. It took 10 weeks and then we did the scene where he gets beaten by Sugar Ray, that was maybe two set ups a day, the same thing.”

“My process is more or less like yours,” Wong said, “because you work with Thelma who I consider one of the best editors of our generation.”

“What was the length of time for the editing on this?” Scorsese wanted to know

He was supposed to finish the film in January of last year, Wong said, but “we were still shooting cutaways before Christmas.”

After the screening I asked Wong his reaction to how flattered Scorsese seemed by his comment that the fight scenes in “The Grandmaster” were inspired by “Raging Bull.”

“Well he’s being humble and nice,” Wong said. “A lot of people look at ‘Raging Bull’ as inspiration for a lot of reasons but I think for him, a kung fu film is something that is so far away from him but actually when you would look at it you get the essence of real combat and it’s not only about action, it’s also about the characters, the pain, so I think this (‘Raging Bull’) is something that is a masterpiece.”

I asked Wong what was next and if it would take another five years of his life. He laughed. “I’m still here talking about the film.”

So how did he like “The Wolf of Wall Street”?

“I haven’t seen it. I’ve seen most of the films for the Oscar, some of them in screenings, some on screeners, for this particular one I want to see it on the big screen but the film hasn’t been released in China so when it’s released I’ll watch it.”