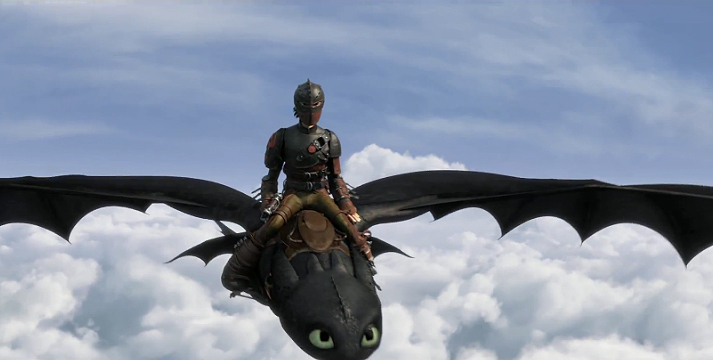 The official teaser trailer for How to Train Your Dragon 2 has been released. I really enjoyed the first film (I think it actually might be my favorite full-animated feature film, personally speaking), and it’s nice to see this film fast-forward into the future. It gives the setting more time to mature, given how the first film ended, but more than that the characters themselves. It’s a planned trilogy, with this next sequel due out in June 2014 of next year and the third installment due out in 2016. The teaser is definitely a teaser, but it shows how Hiccup has still be tinkering and becoming a lot more brave/bold (with both him and Toothless doing their Superman thing). More about the sequel can be read below, an excerpt I pulled from Wikipedia.

The film will take place five years after the first film, featuring Hiccup and his friends in their late teens. Director Dean DeBlois revealed in an interview about the story: “At the end of last film, all these Vikings who were previously somewhat landlocked are now on the backs of dragons so the entire Northern Hemisphere opens up to them. And with that Hiccup’s curiosity increases, the map expands and inevitably they are going to come across new dragons, new cultures.” Hiccup then “discovers a larger conflict brewing between humans and dragons and he finds himself at the center of it.”

One thought on “Teaser Trailer: How to Train Your Dragon 2”