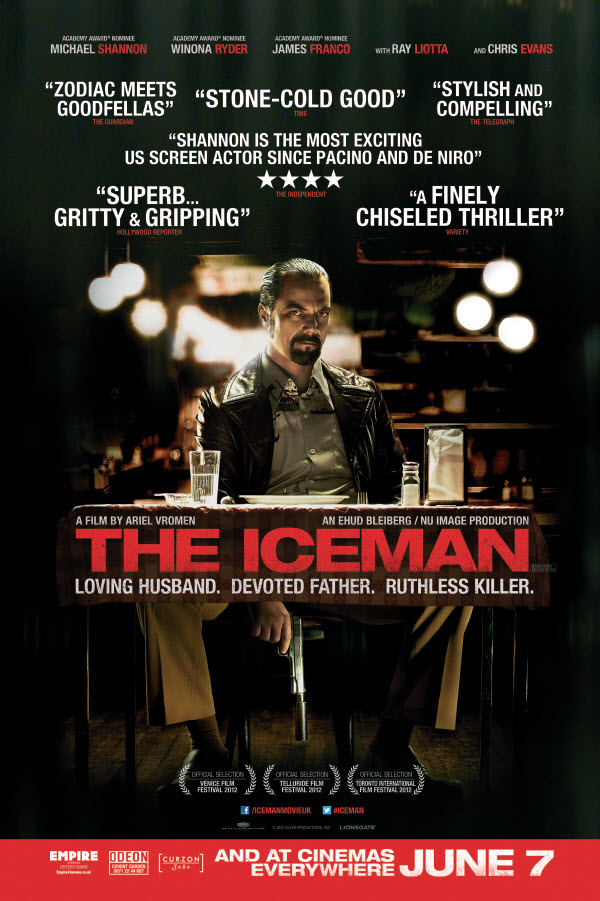 ‘The Iceman is the story of real-life mob hitman Richard “The Iceman” Kuklinski, who was reportedly responsible for over 200 murders.’

Richard Kuklinski (Michael Shannon) and his wife Deborah (Winona Ryder) appear to have a model American life, living with their three children in an idyllic suburban ranch house with a big lawn on a quiet street. But unbeknownst to Deborah and the kids, when Kuklinski goes off to work in themorning — or, on occasion, in the middle of dinner or the middle of the night — he is carrying out executions at the behest of the Gambino crime family, employing a wide variety of deadly methods (guns, knives, explosives, strangling, poisonings) that make it difficult to trace all the fatalities to a single killer. The Iceman shows the development of Kuklinski’s career from the 1950s through the1980s, chronicling his friendship with Gambino soldato Roy DeMeo (Ray Liotta), his mentorship under assassin Robert “Mister Softee” Pronge (Chris Evans), and his troubled relationship with his brother Joseph (Stephen Dorff), who, like Richard, was plagued by sociopathic tendencies all his life.

Stoic, silent, scary, superb Shannon. Michael Shannon flourishes as endearing, yet psychotic, creeps, and The Iceman is no exception. If looks could kill, my God, he would need no weapons. His role as real-life hit man Richard Kuklinski is another example of why you would not cross this face of steel and hollow eyes, yet still find the capacity to feel for him. From porn dubbing to gun popping, Kuklinski is hired as a contract killer by mobster Roy DeMeo (Ray Liotta), and has no qualms about doing the dirty. His initiation from the Mafioso, so vulgar and intense, makes those of frat boys’ comparable to hopscotch. From the get go we know he means business. Things eventually turn sour, as they most often do with the mob, and Kuklinski finds himself out of work. In turn he teams up with another psychotic murderer, Robert ‘Mr. Freezy’ Pronge (Chris Evans), disguised as an ice-cream man who finds it perfectly normal selling treats that are chilling amongst dead bodies in his freezer, to kids. Things inevitably turn more sour.

I enjoy a good movie ‘based on’ actual events and I think it’s a great way to expand your historical horizons on potentially unfamiliar subjects, minus the hefty schoolbooks; plus the entertainment. The Iceman depicts the true (but adapted) story of Kuklinski as the cold-blooded murderer beneath the good family man. Seriously, you know a fine killer when your wife and kids don’t clock your alias for the entire duration of your career…or maybe they just enjoyed the highlife too much to give! I mean, who in their right mind marries a man with a grim reaper hand tattoo, and thinks nothing of it? Kuklinski unbelievably impressively conceals his double life for over two decades, until the very swift end of his reign. He does all he does for the love of his family; don’t most murderous family guys? In ways, his relationship with his daughters can draw in comparisons to doting-dad Don Tony Soprano and his daughter Meadow; the protection, the innocence, the impossibility of killing a woman or child. The main characters were generally well cast, with a strong performance from Winona Ryder as Deborah Kuklinski donning the deepest shade of brown contacts to accentuate her Bambi-eyed sweet nature and ignorance to her husbands deadly shenanigans. Chris Evans shone as the world’s most undesirable ice cream man, but a perfect erratic psycho, with his hillbilly locks in tow and a swagger that would be best suited on a disturbing rag doll. Ray (one-trick pony) Liotta brought no surprises to his role, but played his standard sterness well. There were a few questionable choices in casting, like James Franco’s five quick minutes – what was that about? Totally not necessary, but an excuse for sex appeal no doubt. A big shock to the system was David Schwimmer appearing as an unconvincing gangster resembling an awkward Ross Gellar circa 1980s prom video, with the addition of a greasy ponytail flapping around his shell-suited shoulders. A very. Strange. Image. Unfortunately, the gift and the curse of Friends made it tough to take this part seriously. As unfitting as the role seemed for the movie as a whole, Schwimmer well played a weedy excuse for a gangster. Boo, and he’d jump.

The movie was a good watch, however at times it seemed a little jumpy and incoherent. Perhaps the disorganization was, at times, due to the 20 year span of the plot, which carried little smooth flow of the core story over the decades. A flashback to Kuklinski’s childhood flittered so quickly on screen that if you were reaching into your pick ‘n’ mix you’d have missed the part about his dark past. Pretty important. However, this short shot got lost in the present; a couple more of these flashbacks would have emphasized the reasons behind his ways. Although the movie was enjoyable and an interesting insight into the life of a hit man, and not focusing on the internal intensity of the mafia, it sometimes casually breezed over scenes without naturally flowing into the next. Sometimes I felt a lack of substance, possibly because there was no single pivotal memorable moment that matched the strength of Michael Shannon’s performance.