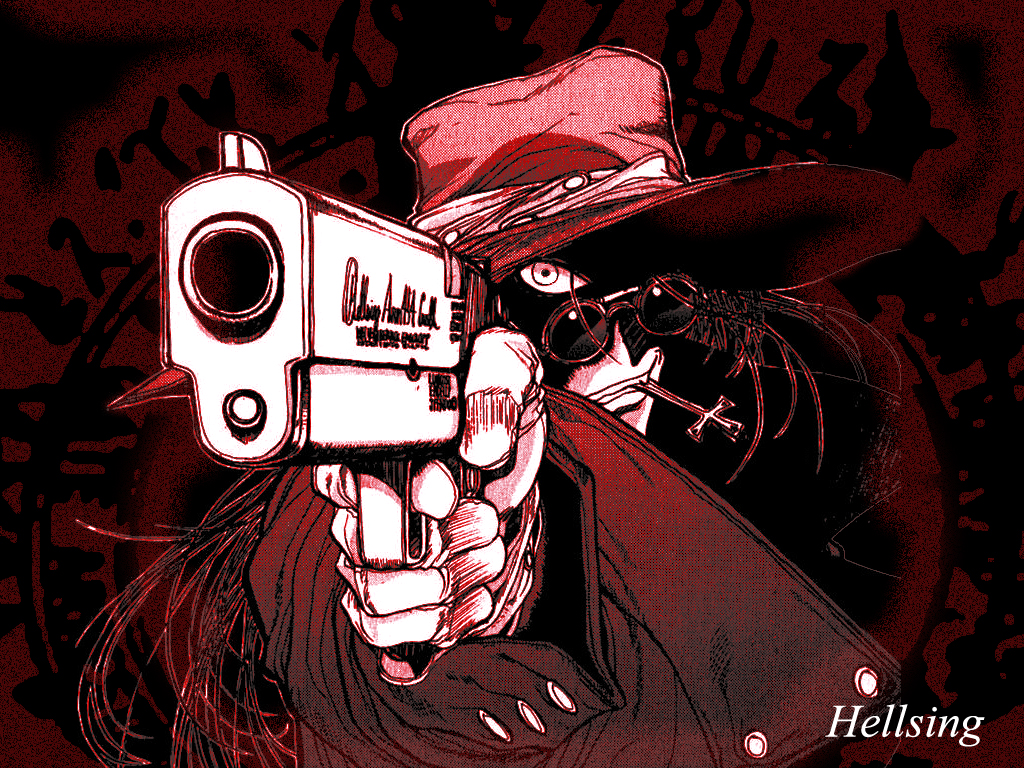 Hellsing is one of the anime/manga series I became aware of around the tail end of my fascination with anime. It was right about when I was wrapping up and closing my anime site, Anones DBZ/8th Dragonball, that I began exploring new anime’s and Elliot introduced me to Hellsing when he had his anime site. It’s a dark series revolving around Vampires and a religious-based agency tasked with protecting the world and exterminating the threat of Vampires. To accomplish this they employ Alucard a vampire who has committed himself to… well, how about I show you a trailer for the anime?

The Hellsing Organization is a secret division of the British Government formed to hunt down and eradicate any supernatural and satanic threats to the nation’s security and to the throne and has done so for generations. Now a threat looms that could possibly wipe out all life on Earth, and it’s up to Hellsing and its top agent, the vampire Alucard, to find the evil force and vanquish it, once and for all.

I remember being fascinated with the musical soundtrack of the series and how it just seemed like a shift in typical J-pop music that had been the fad for a while.  It was a great series consisting of about 13 episodes and a OVA that released later that I strongly recommend fans of anime to watch.

With all of that out of the way the word on the net is that Batman Begins co-writer David S. Goyer is attached to direct the film with plans to begin filming in 2013!  Hell, they even have a cast in mind:

With Goyer in tow to direct, the production company is in the process of bringing some huge names to the cast. More info on that as we get it. Hellsing will be the first in a series of films, but the initial movie will focus on the first four manga books.

Asim Ahmad is the writer and will be playing the role of Alucard. (Asim will also be playing Professor Michael Morbius in The Amazing Spider-Man 2. Nice!) Jake Sharp will play the role of Father Anderson with Ana Johnsson as Integra and Daniel Bernhardt as Walter.

I love this series.  I really do and it’s one of the few anime’s that I will admit that I’m willing to re-watch because the story is that fucking good and different from the Vampire stories that I’m familiar with in the U.S.  It’s interesting that Asim Ahmad, the writer, will take on the role of Alucard and also playing Michael Morbius in the Amazing Spider-man sequel.  Clearly this is an attempt of being typecast for the rest of his career and I hope he and his agent are aware of this fact.

Now I’m interested in this film, but don’t expect to see me get excited anytime soon.  I like the anime but there’s no guarantee I’ll like the movie.  You can thank Dragonball Evolution and anything named Street Fighter for my pessimism.