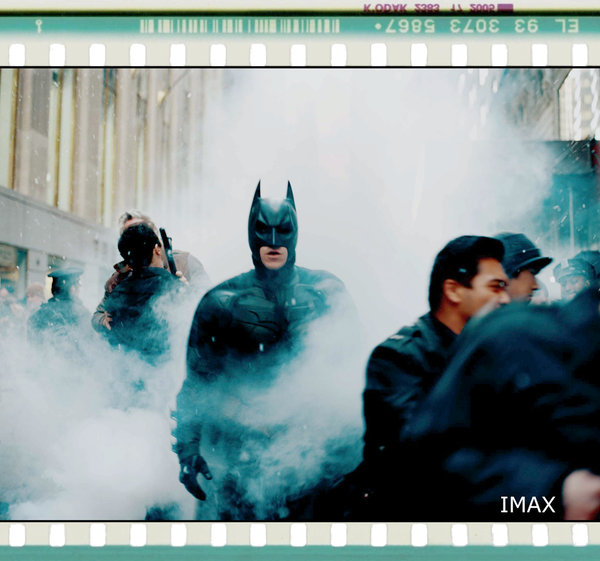 I’m exhausted. Utterly, literally, exhausted from posting non-stop Batman news for like the last 2 months straight. With 1 week to go until the release of The Dark Knight Rises the promotional wheels arent about to stop now nor will they stop after release until everyone is convinced that all blood has been drained from said turnip. Today we get some fantastic new stills from the film, we re-visit the synopsis, and have a few new tidbits about Christopher Nolan’s love affair with the IMAX format.

Around 10 times larger and twice the brightness of regular screenrs, there’s more detail in this expansive format, and one can see it’s not as cropped as the 35mm format. Nolan also expanded on why he and cinematographer Wally Pfister love the format so much, saying, “the sharpness and the depth of the image, projected onto those enormous screens, is simply the best quality image that has ever been invented.” The duo didn’t have a set plan on which exact scenes would be shot in the format, but made sure to always have an IMAX camera by their side. They ended up using it more than they imagined, but could only shoot three minutes at a time.

It has been eight years since Batman vanished into the night, turning, in that instant, from hero to fugitive. Assuming the blame for the death of D.A. Harvey Dent, the Dark Knight sacrificed everything for what he and Commissioner Gordon both hoped was the greater good. For a time the lie worked, as criminal activity in Gotham City was crushed under the weight of the anti-crime Dent Act.

But everything will change with the arrival of a cunning cat burglar with a mysterious agenda. Far more dangerous, however, is the emergence of Bane, a masked terrorist whose ruthless plans for Gotham drive Bruce out of his self-imposed exile. But even if he dons the cape and cowl again, Batman may be no match for Bane.