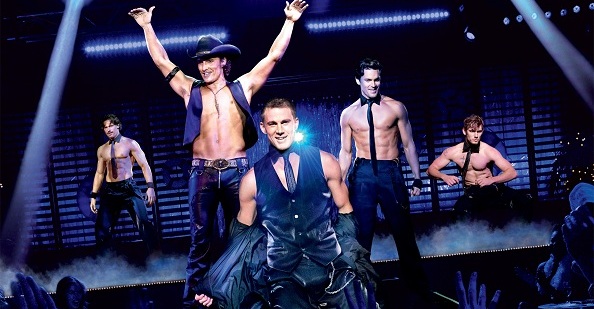 Synopsis: A male stripper introduces a younger man to the life of male stripping while trying to achieve personal success.

Ladies (and Gentlemen) Chick Flick Friday is back and my manhood has been pushed to a breaking point. After viewing the male meat fest known as “Magic Mike,” I think any man points that were remaining after my review of The Lucky One have vanished quicker than the clothing of the stars of this film. Accompanied with the loss of my manhood comes an internal list of inadequacies after continually seeing the subtle smiles and sighs of my girlfriend sitting next to me during the film. As usual I will provide my take on the film along with a couple excerpts at the end from my girlfriend for our female readers.

The film wastes no time getting to the nudity opening with a backside shot of Mike (Tatum) getting out of bed which is quickly countered with a topless shot of geek crush Olivia Munn. Although the trailer is plastered with excessive strip routines, there is more to this film than female eye candy. The film does cater to a female audience with frequent male nudity but that is offset with an adequate amount of humor and a plot that has some substance. The strip scenes are more laughable than sexual putting the male viewers’ awkwardness at ease. In between the strip scenes are the incremental building blocks of an intriguing plot and some interesting character development. Adam’s (Pettyfer) introduction to Mike and their relationship development is fast paced along with the rest of the story and other character building moments in the film. They are introduced working together on a project for one of Mike’s many day jobs. This introduction of course leads to an impromptu career move for Adam into the world of male stripping and taking on the name “The Kid” due to his age and initial coy nature. Mike is the central character of the film and there is little character development time for the rest of the supporting cast unless they significantly affect Mike’s storyline. Adam is Mike’s protege and is almost like a reckless younger brother that Mike continually bails out of trouble. He is seduced by the greed of the business and explores more dangerous ways to earn money, which of course causes repercussions for Mike. Adam’s sister Brooke (Cody Horn) has a few moments of screen time to develop the relationship with her brother and to show her reservations and curiosity regarding Mike. She is also the reason why Mike feels more obligated to watch over her brother. Her bits of conversation with Mike help to develop the daytime version of Mike while the strip routines are a continuous reminder of his night life splashed with a bit of humor. Dallas (McConaughey) is the owner of the strip club and his purpose is to show why and how Magic Mike was formed. He also provides the conflict and struggle that prevents Mike from achieving his entrepreneurial desires by utilizing Magic Mike’s popularity to expand his club. The plot and character development are intertwined, which should be obvious with the main character’s name being the title of the film. The fast paced development of these characters and the plot could be conveyed as a lack of key elements of the film but it’s not. If you pay attention to the sequences you will see that the pace of the film is set by the nature of the job. Juggling a night job and multiple day jobs leads to a fast paced personal life for anyone and I believe that is what Steven Soderbergh is trying to show in this film. Even with the tempo of the film, I still found the plot easy to follow and interesting.Channing Tatum’s performance as Magic Mike is his best performance yet. Besides the fact that Tatum has experience as a stripper, I think that the role highlights his best attributes. The role of the stripper exudes confidence, which Tatum definitely has, but the role he played outside of his stripper life was what I noticed. His character’s emotional conflict was portrayed effectively when needed and what I noticed most was the real nature of his conversations. Part of the credit should go to the Screenwriter for this, but the way his responses were formulated were very much like a person speaking from an intensely emotional state. In that state, a real person does not have consistently eloquent responses, they speak in fragments and with error, much like Tatum did. The supporting cast either gave a lackluster performance or were not present on screen enough to merit an evaluation. Alex Pettyfer comes off as timid and reserved playing the role of “The Kid.” These characteristics work at the beginning of the film as it fits his initial role but as his character grows, his lack of range as an actor is shown and Pettyfer slowly drifts to the background. Cody Horn is disappointing as Adam’s sister Brooke. There is a moment where she has an emotional breakdown and it is so excessive that it is almost laughable. I don’t believe most of the strong feelings she has in the film because it seems to be difficult for her to convey emotion in this role which also makes her relationship with Mike appear to be lacking something. McConaughey’s character Dallas is a lot like the stereotypical McConaughey that we all know which makes this a simple role for him to play. He is of course shirtless consistently and also speaks with his slow southern diction. Dallas’ attitude is much like McConaughey’s attitude and he even has multiple scenes playing the bongo drums. He wasn’t bad in this role, he just seemed like he was playing himself. The rest of Dallas’ team have an extremely small amount of screen time, so small that it makes their performances difficult to review. Matt Bomer is lost in the background and maybe has a few full sentences that are spoken throughout the film. Joe Manganiello has a little more screen time but his time is mostly devoted to his strip routines. He is mostly eye candy for the ladies. Overall the poor performances and lack of screen time did not take focus off the main character Mike, which is the focus of the film.

If you are a female and don’t leave smiling there is something wrong with you. It’s the perfect movie to see on a night out with your girlfriends. There’s a great story but the eye candy for the girls is phenomenal. There were times where I literally had to stop my jaw from dropping because the men looked so good. The strip routines focus on multiple themes. Dressing as cowboys, firemen, cops, and military men, these men would fit into any woman’s fantasy. I would rate it an 8 for the story and a 10 for the men.

“Magic Mike” is a film that has something for both genders. While females may enjoy the strip scenes, there is a male chauvinist’s sense of humor that is frequent throughout the film. There were many laughs mixed with concise dramatic moments. The film is fast paced but it is justified by the lifestyle of the characters within the film. There were a few bad performances from some of the supporting cast but the focus was Tatum’s character and his performance was solid. The film was not like I expected and I thoroughly enjoyed it…well, not that thoroughly…haha. If you can get past the fact that you are surrounded by a theater of horny females, I think you will enjoy what this film has to offer.

An intriguing and laughable film that surprisingly caters to all sexes…

Now on to the man point scale. After reviewing The Lucky One, I somehow managed to get back to 9 out of 10 man points. I think Erik gave me some back for completely bashing the film…haha. I decided that I should lose some man points for liking a film based on male strippers but there is a shot of Olivia Munn’s boobs which I enjoyed so I added a point for that. I’m sure our readers and our staff won’t be as kind…haha.