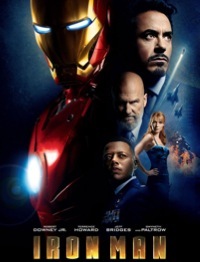 Thanks for checking out our Iron Man Review. If you’d like, you can watch the video version of our Iron Man review at the bottom of this post:

Well, it’s finally here, and now I get to do (a little late) my Iron Man review. It’s been well documented around there that when they first announced that they were doing an Iron Man movie, I thought it was a terrible idea. To be frank, I don’t even think Iron Man is much of a comic book character… really nothing much more than a poor man’s version of Batman (Oh gee whiz… a superhero with no actual powers who is a rich multi-billionare who uses his money to buy gadgets that he uses to fight crime. Why does that sound so familiar?)

But then news started coming out about the decisions they were making. Jon Favreau coming on to direct, ILM doing the visual efects, Jeff Bridges cast as the “bad guy”, Robert Downey Jr. as Tony Stark…. it looks like they were doing everything right. Then the first trailer came out and it won me over…. I’ve been looking forward to Iron Man ever since and so have a lot of other people. So did it live up to the hype? HELL YES!

The synopsis of Iron Man looks something like this: “Tony Stark (Robert Downey Jr.) is the CEO of Stark Industries which produces advance weapon systems for the U.S. military. Tony’s father started the company after WWII, and after his death Tony inherited the company, worth billions. Tony lives the life as a hard drinking, rich playboy ladies man, but he is also a genius who has invented many high-tech items for the company. Tony flies to Afghanistan to demonstrate a new weapons test to the army. On his way back to his plane, his convoy is attacked by terrorists, and Tony is wounded by a Stark Industries missile. Tony is captured and held hostage in a cave with Raza (Faran Tahir), a doctor who saves his life. The terrorists force Tony and Raza to reproduce the new destructive Jericho missile Tony was demonstrating from parts of other weapons. Instead, Tony decides to build a suit of armor with Razas help. The suit gives Tony the strength and protection to be able to escape the terrorists. Back in America, Tony builds a better suit of armor which gives him superhuman strength with the ability to fly. With the help of his personal assistant Pepper Potts (Gwyneth Paltrow) and Jim Rhodes (Terrence Howard), Tony vows to protect the world as Iron Man.”

Let’s start with Robert Downey Jr. It’s amazing that his name was never even mentioned in most online discussion about “who should play Iron Man”? And yet when he was announced, everybody agreed that it was perfect casting. After seeing the movie, I have to concur. Robert Downey Jr. was beyond the perfect Tony Stark/Iron Man. He brought so much of that playboy crossed with undying genius to the role that you instantly bought him as Tony Stark if you’re familiar with the comic, and he brought so much raw boyish charm and charisma to the role that you bought into him as a character even if you knew nothing about the comic book or what Tony Stark is supposed to be like. If this wasn’t a comic book movie, I’d dare say some people would be talking Oscar nomination for him… no, I’m not kidding and I’d happily debate anyone about that point.

The visual effects were masterful! Everything looked so convincing and so real. We shouldn’t be surprised by that… after all it’s the same visual effects company who did the stuff on Transformers last summer and is going The Incredible Hulk in a few weeks as well. The wizards at ILM did such a good job you can never quite tell when you’re looking at a costume and when you’re looking at CGI. Never once in the movie did a poor effects shot pull me out of the movie (that’s the ultimate compliment you can give a VFX supervisor).

Go figure… it was a good STORY! Some people are going to hate that I say this… but it’s the truth. There is less “action” in Iron man than there was in the first Hulk film. No really… it’s true. But here’s the thing… because the story had such a good pace to it and was characters and backstory so well set up… and it was just a good story, the lack of action never becomes an issue. Don’t get me wrong… there is some great action in this flick… just not as much as you might expect… but the quality of the story and the pace at which it’s told more than compensate for that to the point that it never really becomes an issue.

The film does a wonderful job at never alienating audience members who many not know ANYTHING about the Iron Man comic book, and yet at the same time throw in lots of little nods to those who do know it. That’s a fine line to walk, but they did it well which really added to the charm of the movie and allowed comic fans to feel more engaged with it.

This is not The Dark Knight. There has been a (good) trend in some comic book movies like Batman Begins to make things “DARKER”. There’s nothing wrong with that at all, and depending on the characters, that is often a very good thing. But Iron Man chooses not to go down that path and that was a very wise decision. It’s a light, fun and exciting film which is exactly how it should have been (Then again, I’d still be interested in a darker Iron Man film where Tony Stark’s alcoholism is explored)

As was mentioned before, the film could have stood to have a couple of more set pieces with more action. Yes the story made up for that, and it’s not like the movie was suffering for a SERIOUS lack of action… but I still feel like one or two more sequences could have made it even better without making it feel over stuffed.

There is about a 15 minute segment of the film about a half hour before the end of the movie that did start to feel like it was dragging a little bit. It wasn’t serious and never felt boring… but for that brief time it did feel like the film had lost its sense of pace… thankfully it found it again and ended with a BANG!

The only other bad thing I can say about Iron Man is that it may have set the bar so high for comic book movies this summer that it may ruin the rest of them.

Iron man is a fun, exciting, interesting, entertaining comic book movie that even non-comic book movie fans will enjoy. It’s funny, looks great and has some great performances. Yes it could have stood a couple of more action sequences and yes it seemed to lose its sense of pace for a little while, but these are minor complaints that didn’t effect the overall enjoyment of the film for me. While I certainly don’t think this is the best comic book movie ever made (I still say X-Men 2 has that title) the bar for all the comic book movies this summer has now been set VERY high. Frankly, I have my doubts even The Dark Knight can match it. If it does, then we are a lucky audience indeed! Overall I give Iron Man an 8.5 out of 10.

You can watch the video version of our Iron Man review below.