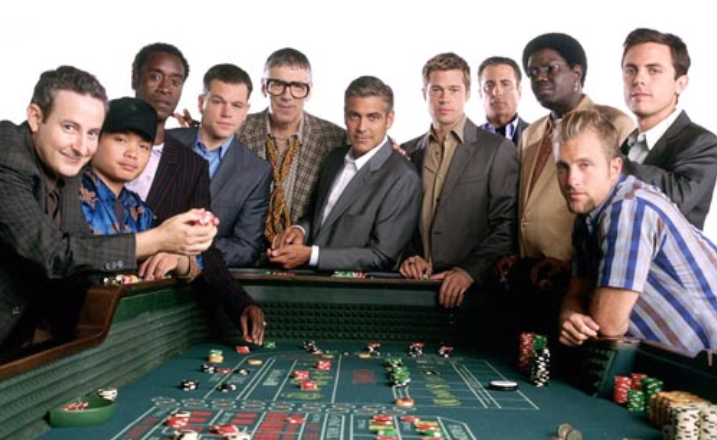 The facts are from all the sequels, which are in fact 5 films, so you don’t lose count.

Not everyone will remember today that the whole mess with Ocean’s friends started in 1960. “Ocean’s Eleven” is far from the very first movie about robberies and not even the best, but stylistically significant for the genre as a whole. Let’s say it formed the system. Half of the film Danny Ocean – played by Frank Sinatra – gathers colleagues in bars and prisons. In the other half of the film, they rob casinos in Vegas and get out of trouble. Before rushing to watch this, we warn you: this is primarily a glamorous show. It’s no secret casinos themselves are glamorous for the goal of attraction. They even use some other ways in that sense like giving free spins and attractive bonuses. The Pack was composed of actors and musicians, whose leadership, after the death of Humphrey Bogart automatically passed to Frank Sinatra, who then simply staged a film about themselves. To a large extent, all modern films about Ocean are also not so much about robberies as about those who starred in this movie.

It’s hard to believe it, but oh man these were times! When those very first friends of Ocean were filmed in 1960, the black actor Sammy Davis Jr. Was denied to settle in the same hotel with the rest of the cast. He was forcibly asked to be deported to an inexpensive “multiracial” Las Vegas hotel. Sinatra caused a terrible scandal and forced the hotel to break the rules for the first time and let a black man in for accommodation. Sammy Davis, by the way, has one of the best roles in that movie.

For George Clooney, Brad Pitt, Matt Damon, Andy Garcia, and others, participation in the Steven Soderbergh project has also become a kind of inter-party. If you watch carefully, it will become obvious that Matt Damon is straining and even somehow trying to play. It doesn’t spoil the film, it just gives it a kind of light cocktail charm.

The lady of  Hollywood at the time – Julia Roberts – was attracted to the scene in a very cheeky way. The most expensive actress in Hollywood was invited by George Clooney. He did that with no more than an invitation and the fee of $ 20 enclosed in the letter. Despite the fact that Julia tried not to act anywhere for less than $ 20 million, the actress actually appreciated the boorish joke in a friendly way and came to the site.

Pay attention that Brad Pitt’s character Robert “Rusty” Ryan is always eating something on the screen. It’s not because Pitt had a bulimia attack, it’s actually pretty creative. According to him, the heroes of the film have such tight deadlines in order to pull off a big deal that they don’t even have time for a normal snack. So he just chews on the go.

Director Steven Soderbergh, in an interview, sincerely admitted that he had no idea when and where Ocean’s team managed to replace money with flyers of intimate services in the course of the plot. Talk about genius!

One of the most improbable scenes in the film “Ocean’s Twelve” just turns out to be a real historical situation. As you remember (or not), the Faberge egg, which crowds of thieves tried to steal throughout the film, eventually turned out to be just a bait! The real artefact was carried by some sleepy student in a backpack on the train.

So, exactly such an operation was carried out by the security and safety services in 1905. It was announced to the whole world that the largest diamond on the planet, the Star of Africa, was being transported to Britain on a strictly guarded steamer. In reality, the diamond was sent under the guise of a parcel.

The fleeting appearance of Bruce Willis in the film “Ocean’s Twelve” seems somehow spontaneous and far-fetched. And yet his appearance has a solid foundation.

Bruce Willis was supposed to be one of Ocean’s eleven friends back in the previous movie, which he was in favour of. Well, it didn’t really work out, he was busy on many other projects at the time. Bruce released as many as four films in 2000-2001, including the thriller “Invulnerable”.

In the movie Ocean’s Thirteen, Matt Damon begins his adventures in London, while communicating on the phone with almost direct quotes from films about Jason Bourne. Here is the result of an extremely successful coincidence: according to the scenario, Damon was in London, only he was filming there for the “Bourne Ultimatum”. At the same time, they filmed it for Ocean’s Friends.

When you rewatch it some time, pay attention: Damon is being filmed at that moment with exactly the same shaking camera that is always twitching in the Bourne films.

One of the heroes of the film appears only for a couple of moments, not to forget just by the phone, although there is a lot of talk about him. According to the story, this is supposedly a new and not yet launched Samsung mobile phone model. Admittedly, in the course of the film, the phone seems like the invention of the designers of the film studio. And yet, it really was made specifically for filming by designers from Samsung.

Both director Soderbergh and actor George Clooney agreed that “Ocean’s Fourteen” would already be too much. Therefore, they closed the men’s series without much anguish, handing over the reins to the ladies.

The locomotive of the women’s film was, of course, Sandra Bullock (allegedly Danny Ocean’s sister), who in the midst of a robbery pretends to be a guest from Germany. It wasn’t difficult for Sandra: the actress spent her childhood in Nuremberg, speaks excellent German, and her grandfather is a German rocket scientist. Not in the movie, but in life!

In the girl’s glamorous cabbage patch “Ocean’s 8”, the most important characters of the previous films were left out. Only one of them had to appear. Yes, yes, Matt Damon. He was given a small episode and even filmed it. However, shortly before the premiere, a scandal arose. A wave of anger broke out online claiming that Damon had no place in a feminist film… and that’s how he was cut out completely