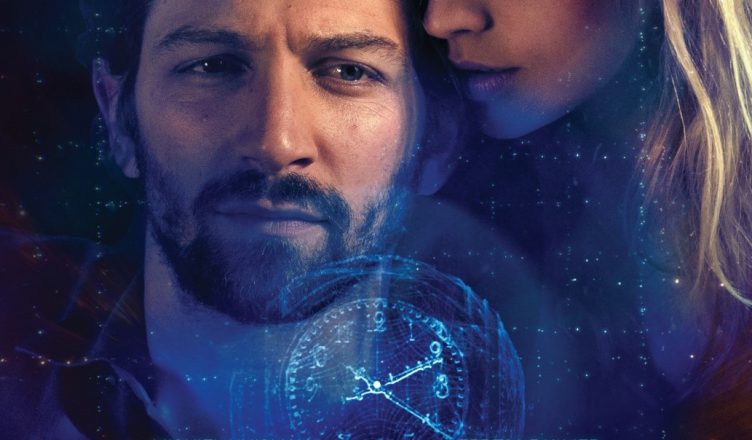 Directed by Paul Currie, with a cast featuring Michiel Huisman, Teresa Palmer, Sam Reid and John Waters. A man’s life is derailed when an ominous pattern of events repeats itself in exactly the same manner day after day, always ending at precisely 2:22 P.M.

Despite their accents “showing” more oft than on occasion, Michiel Huisman (Dutch) and Teresa Palmer (Aussie, and the spittin’ image of Kristen Stewart) are fine both individually and united here as New York lovers struggling supremely with the sinister supernatural to stay solvent.

So I get the recurring 2:22 thing.  Mostly.  Problem is, that’s about all I got here as most of this movie is mired in mystifying incomprehensibility.

Though it is far too confoundedly complicated for it’s own good, “2:22” nevertheless manages to deliver a competent job telling this tale of a young couple caught in a seemingly ceaseless cycle of malice and murder.

Huisman’s character of Dylan is an Air Traffic Controller by trade.  Though drummed up for dramatic effect, to see this guy directing commercial passenger planes as if he’s commandeering CG star fighters with a joystick on a PS4 is just a skosh more than unsettling.  Certainly this is not how the real pros do it up in that runway tower, is it?

Does love conquer all, including the unctuous unseen, in the end? This is no “time” to tip a “hand”, friends. You’ll just need to “watch” for yourselves.

And perhaps take a “minute” to pardon the pun parade.

Though it is far too confoundedly complicated for it’s own good, “2:22” nevertheless manages to deliver a competent job telling this tale of a young couple caught in a seemingly ceaseless cycle of malice and murder.