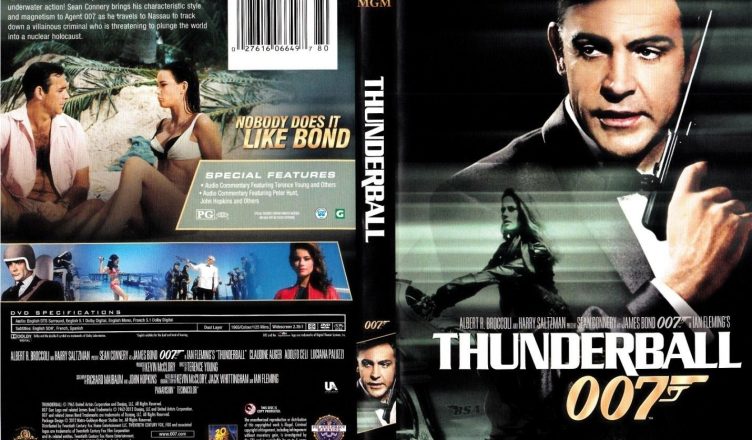 “The name’s Bond. James Bond” is a quote that even children know of. Based on Ian Fleming’s spy novel series, the Bond movies have become one of the longest-running and iconic spy movie series of all times.

As we count down the days to the 25th Bond movie, “No Time To Die,” we list down some of the most epic Bond films of all time.

This fan-favorite action movie stars Sean Connery, the very first movie James Bond, and has the distinction of introducing Ernst Stavro Blofeld, played by Donald Pleasance, as the head of crime syndicate SPECTRE, who would go on to become the main villain in the equally iconic Austen Powers movies.

“You Only Live Twice” was arguably Sean Connery’s best work and the actor announced his intention to quit being Bond after the movie (however, he later reprised the role after a four-year hiatus). The plot centered around a mysteriously-vanished spacecraft while it was in orbit and takes Bond to Japan where he meets the classic villain.

The movie has veered off into outlandish and borderline silly territories but it retained a cult following.

Goldfinger is the third film in the Bond franchise and features some of the most unforgettable scenes and lines in cinematic history, including the gold-painted body of Jill Masterson and the line spoken by the titular villainous character, “No, Mr. Bond. I expect you to die.”

The plot centers around Bond investigating a gold smuggling by the billionaire tycoon, Auric Goldfinger, and uncovering his schemes to contaminate the gold depository at Fort Knox.

The 1964 movie was the first Bond movie to win an Academy Award.

The 1962’s “Dr. No” introduced us to the charismatic British spy, James Bond, played by Sean Connery. The movie features Bond traveling to Jamaica to investigate the mysterious disappearance of a fellow secret agent.

It also introduced us to the first Bond girl in Honey Ryder, played by the beautiful Ursula Andress. Her first few moments in the film wearing the iconic white bikini have become a source of countless references in other films as well as in later Bond movies.

When Daniel Craig was first announced to play the part of the most famous spy in film history, he received a lot of flak from critics, some even saying he was not handsome and charismatic enough to be Bond. Fortunately, Craig proved all naysayers wrong when he blew them away with his fantabulous performance and became one of the best Bonds of all time.

The movie is based on Fleming’s very first Bond book and follows Bond on an assignment to thwart criminal financier, Le Chiffre, who is a paymaster to the terrorist Syndicate des Ouvriers d’Alsace, at a high-stake game of poker. The movie features some of the most epic casino scenes in film history, sure to spur any poker fan to check out some online poker or slot sites right after.

Casino Royale was a reboot of the 1967 version, which some arguably believe was an epic flop. However, Craig’s character brought back life and charm to the Bond movies, which were slipping at the end of Pierce Brosnan’s run.

With the Oscar-winning Sam Mendes behind the third movie in which Daniel Craig plays bond, it is not surprising that “Skyfall” was an instant hit.

The movie has an excellent premise, expanding the role of Judi Dench’s M and her relationship with 007, as the M16 comes under attack. Javier Bardem, as Raoul Silva, played his role as the villain to a T.

Very recently, Adele’s “Skyfall” song was rated as the best-ever made Bond theme.

Spectre is Craig’s fourth film and the second one directed by Sam Mendes. The last Bond film to hit theaters sees 007 pitted against the criminal mastermind Blofeld — this time played by Christopher Waltz — who attempts to launch a global surveillance network to organize crimes across the world.

The movie is a fan-favorite, thanks to Mendes stellar direction, Craig and Waltz’ excellent acting skills, smart writing, and a sense of realism.

The fourth Bond film features elements that fans of the Austen Powers movie will recognize. Even though Thunderball was the first novel which introduced the villainous organization Spectre, in the movie series, this was the third time the organization was featured.

The film is set in the Bahamas and follows Bond on the hunt for Spectre after it steals two nuclear bombs and holds NATO ransom.

The movie is thrilling and fun and featured spectacular underwater scenes. It was the first Bond movie to run over the two-hour mark, a benchmark for many of the movies from there on out.

“From Russia With Love” is the second movie in the Bond Series and it does not disappoint its viewers. The story once again focuses on a plot by Spectre that takes Bond to Russia where he attempts to acquire a Soviet decoding device.

The movie introduces the deadly assassin Red Grant and has some great stand-out action scenes, including the memorable train fight scene.

For many die-hard Bond fans, Roger Moore still ranks as the best Bond and many fans say that in “The Spy Who Loved Me” Moore revealed his best representation as Bond.

The plot shows Bond teaming up with a Russian agent, Anya Amasova, to thwart the plans of megalomaniac Karl Stormberg, who has hijacked British and Russian submarines carrying nuclear warheads, and who plans to destroy the world and create a world under the sea.

The movie features one of the most iconic Bond villain, Jaws, and has one of the very best opening sequence in which Moore displays his breathtaking skiing skills.

GoldenEye was the first Bond venture for the ultra-smooth and suave Pierce Brosnan and Judi Dench’s debut as M. it was the first movie in the series that did not take any of the plot elements from Fleming’s book and was written by Michael France.

In the movie, 007 goes head to head with a former M-16 agent gone rogue and prevents him from using a satellite weapon that can fire destructive electromagnetic rays towards London.

The movie has a coherent plotline, Brosnan is dashing in his role, and the action sequence is a step up from the previous films in the series. Out of the four Bond movies that Brosnan starred in, GoldenEye easily takes the cake.

These are just a few of the Bond films that have thrilled and inspired viewers all over the globe. Let us know which ones are your favourites.

One thought on “Top 10 Bond Films of All Time”