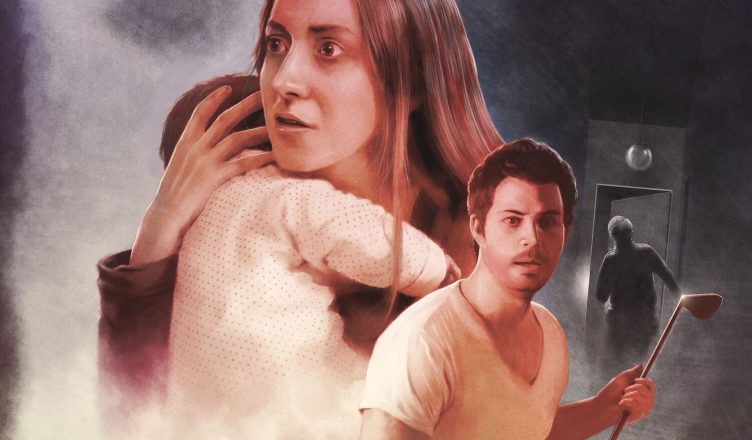 “Something” is a low budget, minimalist domestic mystery drama with hints of the supernatural. Or is it otherworldly? This is the question looming throughout this strange and unnerving chronicle of two regular people thrust into circumstances they appear helpless to comprehend nor conquer.

A young L.A. suburbanite couple (we never learn their names) with a newborn baby boy begin to experience inexplicable visions of a hideous masked phantom in and outside their home. For her, it may be symptoms manifesting from postpartum depression. For him, the pressure of a looming business trip with his biggest sales client might be taking a toll on his psyche. Soon each of them begin to forget that which happened only hours before. They do things, potentially dangerous things, with no recollection or reason for why they may have done them at all.

They eventually call the police after one particularly violent encounter with the sinister intruder. But their far-fetched report is patronizingly dismissed by the cops. A well meaning veteran officer wraps up the investigation by telling them that they’re both overtired new parents and they should get some much needed rest. This guy will be singing an entirely different tune later.

And the entire way first time Writer/Director Stephen Portland summons a creepy and claustrophobic tone that keeps us guessing as to what exactly in the hell is going on. (Hint: pay close attention to a matter that is introduced early on in the film. And try not to let it slip your mind as I did).

The movie’s resolution, while certainly disquieting, may come off as mundane. But perhaps that is precisely what Portland is aiming for here. That thrust being that these people aren’t really any different than most of us. They are just living their lives, doing the best they can, assuring each other over and over that this rough patch is going to pass. And then everything will be okay.

And look what happened to them.

An unnerving chronicle of two regular people thrust into circumstances they can neither comprehend nor conquer.

There's "Something" there with this Odd Story

“Something” is a low budget, minimalist domestic mystery drama with hints of the supernatural. Or is it otherworldly?