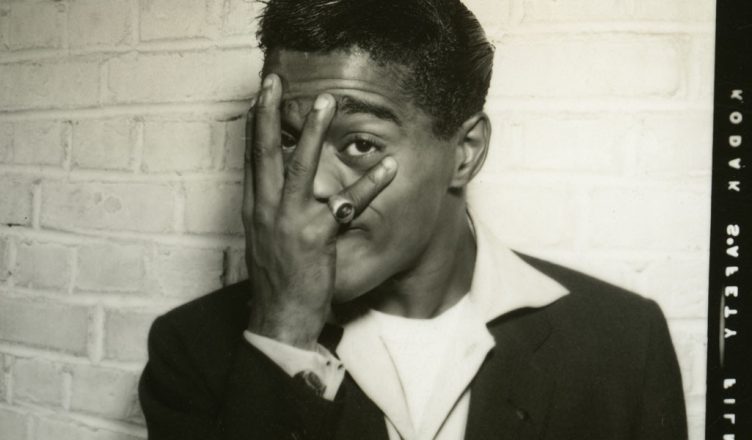 Director Sam Pollard brought his hugely entertaining documentary Sammy Davis, Jr.: I’ve Gotta’ Be Me to the 53rd Chicago International Film Festival and spoke about the fascinating subject of this film.

A host of celebrities, ranging from Whoopie Goldberg to Billy Crystal to Sidney Poitier testify to the man who was “showbusiness from the top of his head to the tips of his toes.” Sammy Davis, Jr., won his first talent show at the age of three (He sang, “I’ll be glad when you’re dead, you rascal you.”) and performed with the Will Mastin Trio comprised of his father and uncle.

Until he was 45 years old, long past the life span of the trio, his earnings were split three ways amongst the members of the trio. Sammy was born to a Catholic mother and a Baptist father at 2632 140th St. and 8th Ave in Harlem, but converted to Judaism.  He never went to school and, much like Michael Jackson, never had a real childhood.

Sammy Davis, Jr had his big break-through as a singer was the song “Hey There” and stars like Eddie Cantor and Jerry Lewis (who is interviewed shortly before Lewis’ recent death) helped advise him.  He lost his left eye in a 1954 car accident that was rumored to have been Mafia-inspired. It took him two years just to re-learn how to pour a glass of water, but he came back to performing as good as before. And when he was good, he was very, very good, singing, dancing acting and doing impressions of white celebrities, a first in the business.

The film clips in this bio-pic (written by Laurence Maslon) are truly enjoyable and take you back to the days of the Rat Pack: Frank Sinatra, Sammy Davis, Jr., Dean Martin and Joey Bishop. Those days began to fade in 1964 and the personal snub that Sammy Davis, Jr felt when JFK excluded him from his Inaugural Ball (primarily because of Davis’ marriage to May Britt, a white Swedish beauty) hurt Sammy to the core. He is quoted as saying, “”Nobody’s gonna’ get inside any more.  I can’t afford that luxury.”

When Harry Belafonte wanted Sammy to come to Selma for the civil rights march, he was appearing in “Golden Boy” on Broadway and told Belafonte his absence would close the play. Harry bought the house to get Sammy Davis, Jr to come to Selma. Despite Davis’ efforts, he was often not accepted by the black community, who often considered him a sell-out and an Uncle Tom.

Sammy Davis, Jr was the epitome of extravagance and died in debt to the IRS. He was ostentatious and larger than life, saying, “I have no desire to be the boy next door.” He is quoted as saying, “If I’m not going first class, the boat ain’t leaving the dock.” He was also the first black man to sleep in the White House.

The stories told of Sammy’s abuse when serving in the Army are truly heartbreaking.  Even when he appeared in “Golden Boy” with Paula Wayne ( Arthur Penn directed), rednecks  said,  of Paula, “She’s the one who kissed the N—-.” His only Number One Hit was “The Candyman” from the “Willy Wonka” movie and Sammy thought it was a terrible song. He also supported causes when they were not fashionable, supporting Richard Nixon for President and making trips to Vietnam when the tide of public sentiment had turned against the war. (“It’s not cool to be in support of the war.”) He became an anachronism in his own time

Stories like the one about a patron at the Sands Hotel in Las Vegas complaining that Sammy was swimming in the swimming pool, which caused them to drain the pool were horrifying.  The only place he felt safe was onstage, as he fought the odds his whole life (and usually won).

When he contracted throat cancer, he did not have surgery for fear he would never be able to sing again, but had radiation. He died on May 16, 1990, in his Beverly Hills home with third wife Altovise by his side.

None of the children from his marriage with May Britt (1 biological daughter, 2 adopted sons), nor May Britt herself appeared in the documentary. Pollard shared the information that he hired a crew and a studio and flew to Nashville to interview Sammy’s daughter Tracey, but she did not show up on the appointed day. His children seem to have been lost to him, as “everything was about Sammy.” (His marriage to May Britt ended in 1964; they divorced in 1968).

This is a great documentary about a fantastically talented legend. Director Sam Pollard said, “We’re all complicated. He was larger than life and a public figure.  I’m always drawn to the complexity. If you’re going to do a documentary about someone as phenomenally talented as Sammy, you look for the dark edges.” Pollard said he had read the autobiography “Yes, I Can: The Story of Sammy Davis, Jr.” (by Sammy and Jane and Burt Boyar) when he was 15. He noted that Sammy “had trouble being alone” and that they were “very fortunate that we had access to all the audio tapes from his autobiography.”

As Whoopie Goldberg and Billy Crystal say in the documentary, “I don’t know if we’ll ever see that much talent in one person again.” Crystal likened him to a comet passing by the Earth. Many black performers who appeared at his 60th anniversary in show business testimonial on February 4, 1990 (just 3 months before his death), such as Michael Jackson and Geoffrey Hines, saluted him, saying, “Thanks to you, there’s a door we all walked through.” The scenes of Davis tap-dancing with Hines literally days before his death from throat cancer demonstrate that he was one of a kind; he actually made Hines (co-star of “White Nights” with Mikhail Baryshnikov) look clumsy by comparison.