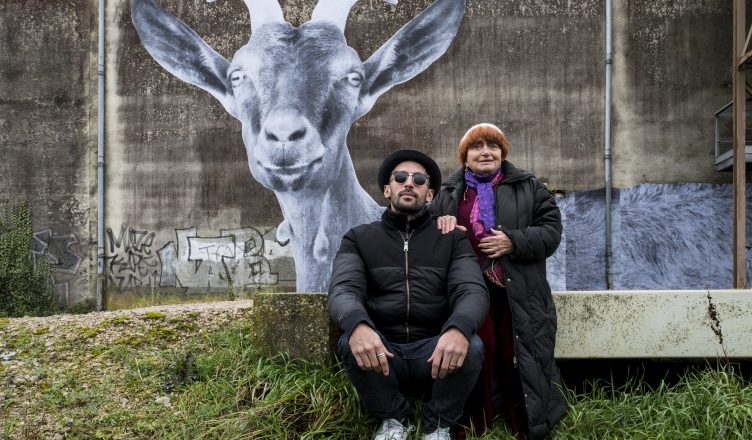 Faces Places co-directed by the prolific and legendary filmmaker Agnès Varda, and the unknown street photographer known as JR, is my favorite film of the 20 or so I’ve seen at the New York Film Festival so far. It’s hard to believe there will be one that will top it.

She is 89; he is 33. She knows film giant Jean-Luc Godard — who is a plot line in Faces Places — and was married to director Jacques Demy until his death.  Varda has a long filmography and has never collaborated with another director up to now. But from the moment Faces Places begins, when she and JR imagine all the places they might have met — film cuts to them dancing at a disco — the two have a chemistry that cannot be faked.

This is a road trip. The plan is simple;  the pair tour the French countryside, driving from one bucolic village to another. They mingle and interview the villagers. JR has created a photo booth in the van and at each stop they invite locals to pose for photographs, which they blow up and paste on nearby buildings, monuments or other structures. Celebrating the impermanence of these art installations, whether on walls that will  be knocked down or sand dunes soon to be erased by the ocean, is entirely the point.

JR told the audience at the director’s talk Monday evening, that they didn’t scout for working class people. “that’s who we met in factories. We never see classes. We see people. We just go for regular people.”

Varda complained that some reviewers, even those who praised Faces Places, didn’t get the point. “We didn’t just make it charming and lovely like some newspapers started to say. It gets on my nerves you know (when they say that).” She added, “It’s a documentary but the subject is not so light. We haven’t heard from these people (before on film). We learn from these people. We learn about what it means to be the last person working in a factory, or the last woman on the street, before all the houses are torn down.”

To a question as to how they met, Varda said it was simple: “We met once because somebody said we should meet. He came to my place.” The next day she came to his. She met his friends. This went on for a while.

They had no idea, JR said, that they would in two 1/2 years make a film together.
The two complement each other. People like to talk to Agnès Varda. She is curious and funny. JR knows how to engage people he doesn’t know. Engaging people is a talent they share.

Physically they are a sight gag; he is lanky and very tall and she is diminutive and round. This makes for slapstick moments. JR pushes her in a wheelchair at top speed down Louvre’s Grand Gallery in one of many funny scenes, this one a homage or satire of a scene from a Jean-Luc Godard film.

The teasing and bantering goes on in person as it does on screen.

“He has complained about me. I’m too small. I’m too old,” said Varda to the audience.

He countered that she always griped about his sunglasses and how they conceal his eyes .

But when it comes to their artistic vision they are in agreement. In describing Faces Places to  audience members who hadn’t seen it, JR said, “There’s no special effects. There’s no weird suitcase or gun or monster… Just to warn you Faces Places is pretty simple.”

Varda added, “It’s daring to do no special effects, no violence, no special suspense, when the world is now so violent.”
As for what they learned about each other, Varda said she appreciated JR’s “beautiful energy” and his ability to let “people be bigger than life.”

About his collaborator, JR said he enjoyed the time  they spent together making Faces Places and hoped there were “many more to come.”

Varda rolled her eyes. After all she is nearly 90.

“She’s tired of me already,” complained JR. “ I know her address. I have her phone number… I’m not letting her go. Be ready,” he warned her.

He added, “She’s curious about everything always, like a kid. And that’s something that is a magical key to staying aware of the world,” he said. “She just doesn’t say, ‘Hello, what do you do?’ She asks, ‘Why do you do it and how?’ and constantly with everything, with everybody.”

Varda, who helped shape the French new wave cinema, knows the power of the camera to commemorate people, places and memories. It’s  always personal and emotional for the filmmaker who reflects on her own life and long career.

Faces Places world premiered at Cannes where it received raves. Varda will receive an Honorary Oscar by the Academy at the Governor’s Awards ceremony on Nov. 11.

If you didn’t catch either of the NYFF screenings, rush to the theater to watch this wonderful documentary when it begins a limited release Friday.