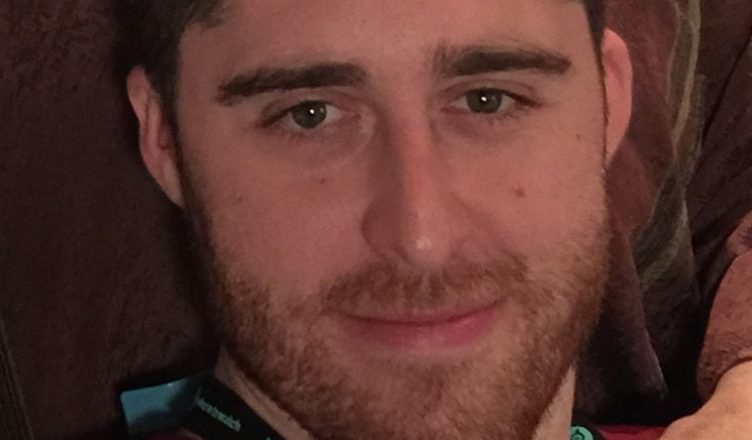 Following the absolutely gut-wrenching preview showing of the film “It Comes At Night” in Chicago on Thursday, June 1st, writer/director Trey Edward Shults talked   about how this, his second feature film, came to be. (the movie opens wide on June 9th).

At 18, Trey Shults became an intern on a Terrence Malick shoot in Hawaii for the volcano scenes in “Tree of Life.” He was rooming with the film loader, who taught him how to load film inside a changing bag for Imax films. They were helicoptered to the volcano site and filmed lava erupting from the volcano.

Something caused the second unit film loader to be unavailable and Trey stepped in, with lava oozing down the sides of the volcano in the rain and the cinematographer yelling, “We need another mag!” After that, Trey quit college at 19 and, in addition to interning in Austin with Malick, was employed on a Jeff Nichols movie.

Trey Shults spent this time studying movies constantly, making shorts, and trying to find his voice as a filmmaker. He says he has never worked on “a traditional film set” and is open to collaborating with actors.

“Krishna,” which was Shults’ first feature-length film, premiered at SXSW in 2015, featured his family members, and earned him a 2-film deal with A24. It is a movie about family and, as he said in Chicago, “I knew I had to quit making movies that starred only my family members.” (Laughter). 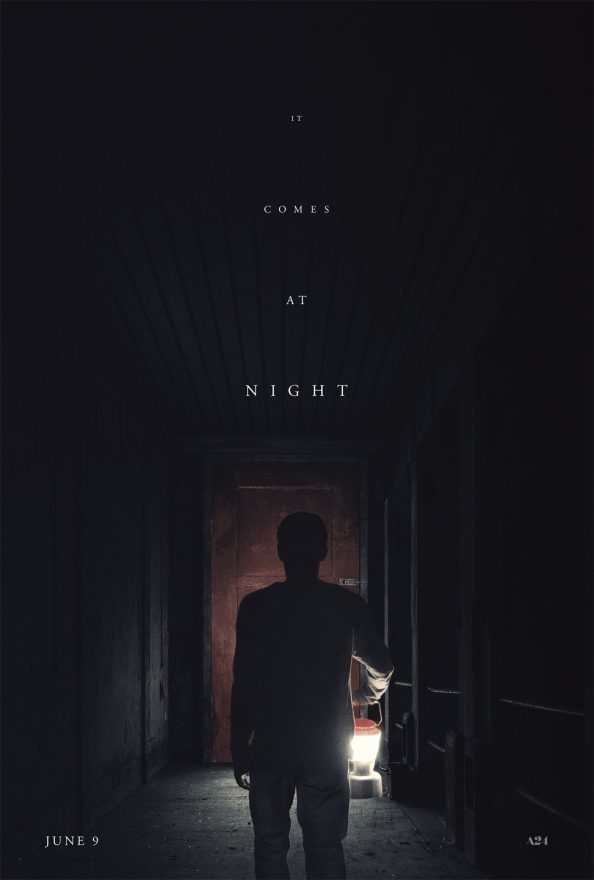 So “It Comes At Night,” film number two, was born, growing out of a script that Shults had actually written prior to “Krisha” and refined for the studio after Shults had captured the John Cassavetes Award (2016), the Independent Spirit Awards Breakthrough Director Award , the Gotham Award (2016) and earned reviews that praised “Krishna” as “unforgettable,” “original” and “a ferociously impressive film debut.”

In this, Shults’ second full-length feature film, Joel Edgerton (“Loving,” “Midnight Special”), who plays Paul in the picture and also was an executive producer, helped with assembling the top-notch cast: Carmen Ejogo of “Selma;” Riley Keough (Elvis’ granddaughter, from “The Girlfriend Experience” and “American Honey”) as Kim; Christopher Abbott (“James White”) as Will and new-comer Kelvin Harrison Jr. as Travis, the character through whose eyes the story is told.

Said Shults, “I’m very blessed, because they are all very talented and amazing people. I went through the Hollywood bullshit casting. You fly to London and meet with someone and they say, ‘Oh! I’d love to be in your movie!’ and you fly home and then they say they have committed somewhere else.” Shults shrugs and says that the role of Travis was cast during a Skype session with Kelvin Harrison, Jr. of New Orleans, who was 22 at the time, while Shults was 27. Kelvin is the person through whose eyes we experience the film and he does a great job. (When asked for his favorite scene in an interview, Harrison said he enjoyed the grim, gory sequence where Riley Keough straddles him in bed and oozes thick blood into his mouth. He also identified one of his favorite movies as the 1959 film “Imitation of Life,” about a light-skinned black girl passing for white).

The personal elements of the film came from Trey’s watching his father (from whom he had been estranged) slowly die from pancreatic cancer. As someone who nursed her father through terminal liver cancer in a town too small to have much of a hospice program, I could definitely relate. In sharing that commonality, I earned a hug from the director, who is the product of various strong female role models, including his actress aunt Trisha Fairchild, who starred in “Krisha” and his mother Robyn.  Family is important to Trey and that line about trusting family first is in the film’s dialogue. 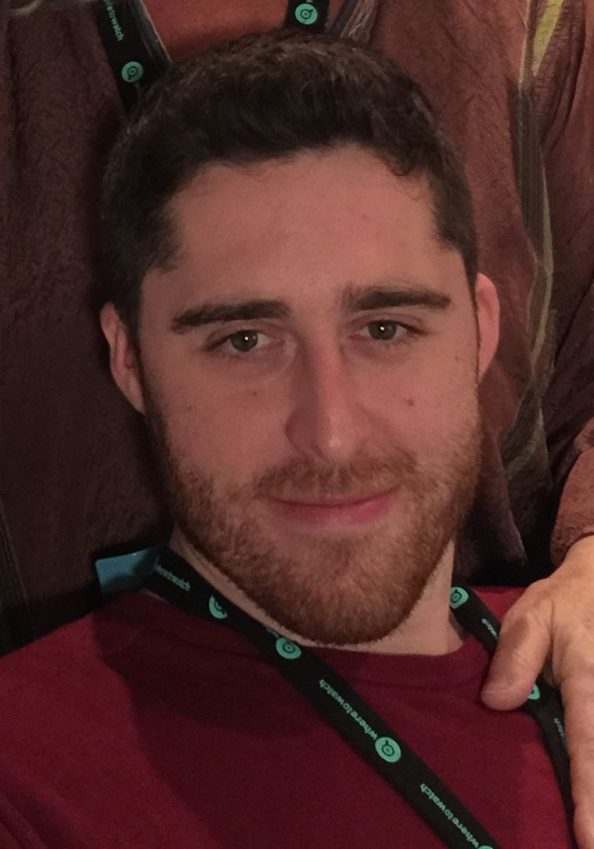 The long, slow fade to black of his father’s death made a deep and indelible impression on the young filmmaker. He says, “I started writing and it started spewing out of me. For the people who dig it, that’s cool. It’s not about the disease; it’s about what the disease does to people.” He mentions genocide and paranoia and the struggle to survive, turned up to maximum volume.

Set in a remote cabin in the woods, the survivors of an unnamed disease are trying to survive, using gas masks and barricading themselves from what is out there that might infect them or kill them. We never know exactly what that might be, but gas masks are used throughout, as are kerosene lanterns and natural light (much like Terrence Malick’s films and their emphasis on the  use of  natural light and nature). The film’s tone is reminiscent of early Carpenter or “Night of the Living Dead.”

Dream Sequences:   Q: You’re never really sure whether it is really a dream or reality. Is that intentional?

A:  “Yes. The way we shot it was deliberate, from 240 to 275 to 30. The score is also subtly different and, at the end of the movie, the aspect ratio slowly changes and the reality/dream music is interwoven; we shot 3.0 for the rest of the film. The goal with the nightmares was a path into Travis and how he’s thinking and how he’s processing these things. (“Totally,” is usually Trey’s favorite one-word response.)

Q: What about the stupidness of horror movies, in general? What did you think was stupid in that way in your film, if anything?

A: Travis running into the woods after Stanley (the dog) is probably the stupidest thing. (He adds that he would probably have done it, too).

Q: What about the title?

A: A title hits you and then it sticks with you. At night is when my brain is most active. It’s a little gateway into how I think. (Laughs) I had this nightmare where I had cancer, but it was just in my finger, but I was gonna’ die. The title “It Comes At Night” is not literal. It is metaphorical. It’s intentional. The purpose was to put you in the headspace of the characters.”

As Trey says, “The entire theme is pretty minimal. Less is more,” he says, quoting Mies van der Rohe.”I really wanted to make the most of this toned-down setting. There isn’t an ounce of fat on this movie.” Shults mentions some of his obsessive/compulsive tendencies (wrestling, when in high school, until a shoulder injury ruined that career) and says, “I mixed the gunshot sounds over and over and over.” Shults also said, “We didn’t do night lighting. You go in the woods with a flashlight or in your house and it’s dark and it’s totally terrifying. We wanted economical storytelling. It’s a low-budget film (shot in 5 weeks with one set, the cabin.) There is no hidden material.”

Shults tells the story of attending a screening of “There Will Be Blood” with his mother and how it influenced him, as have such diverse films as “Boogie Nights,” “Night of the Living Dead,” “The Shining,” and “The Thing.” For all of his admiration for such classic horror films, Shults says “It Comes At Night” is not a genre film.

“The movie is about the unknown and the fear of the unknown. Death is the ultimate unknown.” He tells the story of his cousin who, having been drug addicted but clean for years, came to a family reunion but relapsed while at the reunion (and later died). These brushes with death early in his life—whether a parent or a cousin—obviously have informed the young filmmaker’s work. His apprenticeships with Terrence Malick inform the first 45 to 50 minutes of the film, when the cinematography goes from cameras to dollies to zoom shots.

Some will not like the ending, because the film leaves us with questions.

Shults says, “I like questions. I know that’s what I love. I love the kind of movies where you think about them later and wonder about things. If this turns out to be one of those movies that stays with you afterwards, that’s cool.” (“Totally.”)