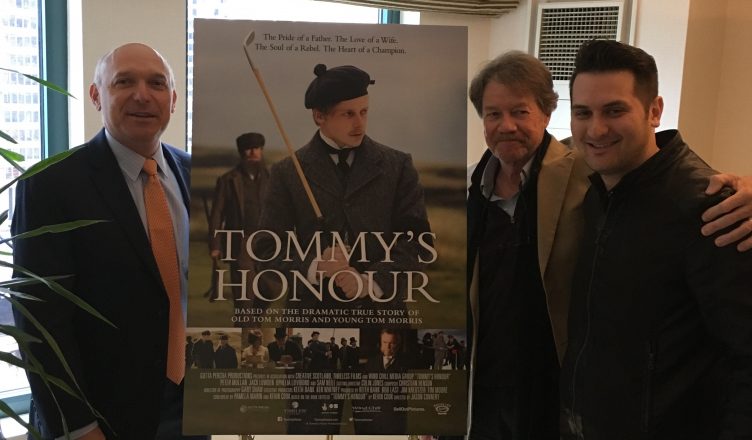 Tommy’s Honour tells the story of the first star of and one of the founders of golf, Tommy Morris. The movie is out now in theaters now. The film’s producers Keith Bank and Jim Kreutzer came through Chicago to talk about the film. Below is the audio of the interview I conducted with Keith and Jim at the Sheraton Hotel in Chicago. We talked about discovering this fascinating story and bringing it to life, as well as the challenges in promoting it to a wide audience appeal.

You don’t often hear from producers when promoting a film. They are sort of the hidden figures behind-the-scenes. They are usually just seen as the guys with the deep pockets, but in reality they are the driving force that brings a movie to life from paper to screen. Jim and Keith’s passion really helped make this movie, but also they were instrumental in bringing it to a worldwide audience. I really enjoyed talking to these men. Keith was a bit more serious and reserved and Jim was very personable, was always addressing me by my name, which I must admit is kinda nice. Even though Jim took the lead in talking, both men are very passionate about this film, it was evident sitting next to them.

Jim was as surprised as I was that this story of Tommy Morris was never told on film, and that’s coming form the producer of the film. Kudos to these guys for acting on it and having the vision to make this film. From my discussion it really seemed like these would be fun bosses to have, since they let the filmmakers and talent do their jobs, but also trusted in them by not requiring a big name star in the movie. Many producers would have opted and required that.

Tommy’s Honour is out now in theaters. Check your local listing.