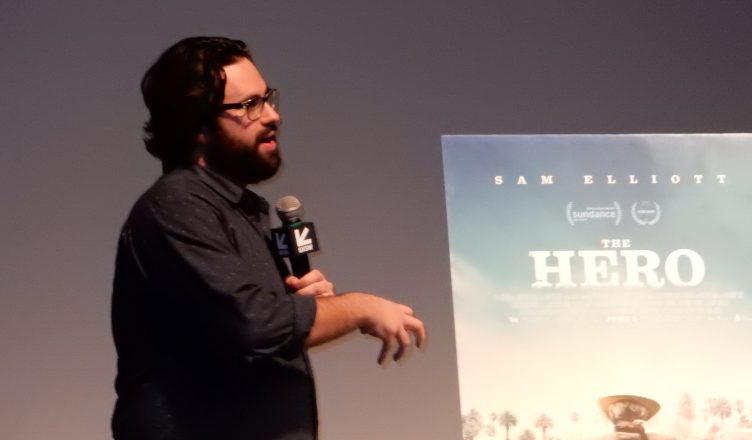 The mythic spirit of the western, our American archetype, is alive and well at the 2017 SXSW Film Festival with Sam Elliott starring. I’ve seen two westerns in two days at the Festival. “The Hero,” which showed at the Zach Theater on Friday, March 10th, was the better of the two.

“The Hero” was an unusual picture because it focuses on a 71-year-old actor (Elliot) who has been playing western parts for most of his career. Now, he is in the twilight of that career, and most of his work seems to be voice-over work (primarily for a BBQ sauce). He’d like to get a feature like “The Hero” that catapulted him to fame back in the day, and he’s phoning his agent, looking for more work. And then he is derailed by a diagnosis of pancreatic cancer.

There are parallels between “The Wrestler” plot that featured Mickey Rourke and this plot. Both men find they have a potentially terminal illness and are dealing with that knowledge the same way. Both are initially in denial and tell no one. Both have a daughter from a failed relationship (real-life wife Katharine Ross plays the ex) and both men want to make peace with their only child before it’s too late. But the daughters aren’t cooperating much in moving towards reconciliation.

I wanted to see Katharine Ross (“The Graduate,” “The Cincinnati Kid”) after all this time, if only to see how she has aged alongside her silver-maned real-life husband, Elliott, whom we have seen in the TV series “Justified” and, earlier, as the narrator in the Coen Brothers classic “The Big Lebowski.” There is no doubt that Elliott has the best hair of anyone his age in pictures. (Robert Redford might be a close second.) Sam Elliott and Katharine Ross were in “The Cincinnati Kid” together, way back in 1969, but did not officially meet and begin dating until 1978, ultimately marrying in 1984, 33 years ago. (They have one daughter born that year)

The love interest in this film is not Elliott’s true-life wife, but Laura Prepon, who played Donna on “That 70s Show” (“The Girl on the Train.”) (Prepon announced that she is pregnant by fiancé Ben Foster in January.) 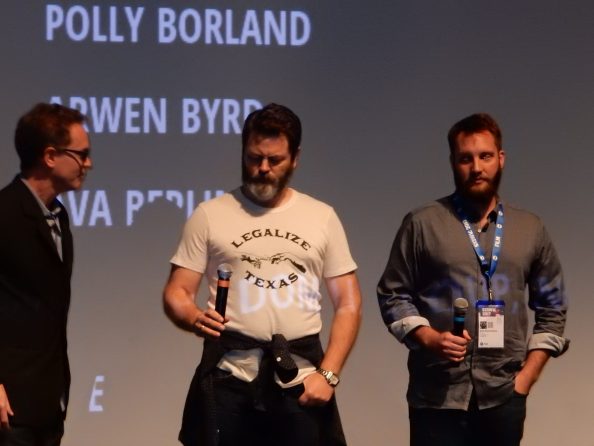 In the film, western star Lee Hayden is going to be honored with a Lifetime Achievement Award by an organization known as The Western Appreciation and Preservation Guild. Since he also has just learned he has pancreatic cancer, he is struggling with the thought that his only chance at prolonging his life slightly may be a grim procedure known as the Whipple Procedure, which would remove part of his pancreas, his gall bladder and part of his small intestine. Even then, his odds don’t sound that great. And Laura actually seems interested in getting to know him better and agrees to be his date for the awards ceremony (after Lee’s estranged daughter turns him down).

Elliott does some truly fine acting in the scenes where he is auditioning for a part in a film and must speak lines as though to his daughter. Real life impinges on fictional life as he is overcome with emotion. When Lee’s new female friend Charlotte reads Edna St. Vincent Milay’s poem “Dirge Without Music” to him, Elliott’s reaction is also spot on.

All the characters play their parts well, although it was difficult to understand how Elliott’s character of Lee Hayden was so forgiving of Charlotte, after her cruelty towards him onstage during her comedy act. The elderly:   one of the few remaining groups under fire; it seems it is just fine to make fun of someone for being old. That is exactly what Laura Prepon’s character does, without mercy, in her act. Yet Elliott’s character, Lee Hayden, is quite forgiving. 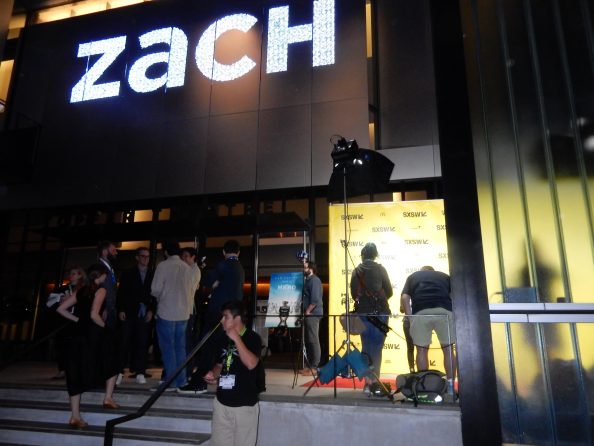 During the Q&A, Director Brett Haley was asked why he has made more than one film about old age. (His 2015 film “I’ll See You In My Dreams,” starring Blythe Danner and Sam Elliott, was also about an older woman facing old age, death, and being alone.) Haley first responded that this film was built around Elliott’s persona, but went on to say, “This film is about legacy…about looking back on one’s achievements. There’s something very interesting to me about older people who are toting up their achievements in life and trying to cope with the end of it all.  Ageism is a problem in film and it’s a problem in society.  That’s just something I’m drawn to.”

There are many beach scenes in the film which cinematographer Rob Givens photographed beautifully. Haley shared with the audience that the crew shot all the beach scenes in one day but when they went back to film they had to find a cliff for the principal actors to stand on (Elliott and his daughter Lucy, played by Krysten Ritter) because 6 to 8 foot swells had covered the beach.

One very big positive about the film, for me, was the use of Edna St. Vincent Milay’s poem “Dirge Without Music.” I asked Haley whether they had to pay the poet’s estate to use the film, and he said, ”They were very nice, and they let us use the poem for free.  Her estate said, ‘Any time we can get the word out about her work, we’re happy.’” The director went on to say that, in his experience, “I think it is through music and poetry and film that we communicate. That’s what we all do. It’s why I have a recurring theme in the movie involving the Buster Keaton film clips. If I were dying and wanted to talk about death, that’s what I’d do.  To me, it felt like a real thing that real people would do, and Milay is one of my favorite poets.”

Asked about Sam Elliott’s ability to roll a real joint for key plot scenes, Haley made it clear that Sam Elliott does not smoke marijuana, but knew exactly how to roll a doobie. Nick Offerman (“Parks & Recreation”) playing his drug dealer and friend from co-starring in a television series, was very complimentary about Elliott’s work ethic and what an honor and education it was to work with the old pro.

Said Offernan:  “On the set of Parks & Recreation (Elliott had a recurring role as Nick’s doppelganger), I always tried to show up early. So, to work with a giant like Sam Elliott, I wasn’t going to show up less than thirty minutes early or not knowing my lines. It’s the same way I felt working with Michael Keaton. These guys are legends. So, one morning we’re shooting at 4:30 a.m. and I show up half an hour early, and there’s Sam, already leaning against the truck.” (laughs)

Director Haley shared that the film was originally supposed to be called “Iceberg,” which had to do with a metaphor in the film and the image of an iceberg on the drug dealer Jeremiah’s computer, but, just before shooting began, the title was changed because, “’The Hero’ is a closer portrayal of what the film is about.  The title came to me right before we shot, and some of the early producers weren’t as keen on it, but I think it works.”

There are some random scenes meant to show Lee Hayden’s career in movies. In one, Elliott emerges from a small pup tent, wearing a cowboy hat. When you see him in the scene, it is unclear whether this is a flashback, a flash forward, or simply present history. Likewise, a scene where Lee (apparently dreaming?) sees a man hanging from a tree is in the film, but the message it is supposed to be sending is unclear.

It was nice to see a film that acknowledges that some people do live into their 7th decade of life and are not necessarily total fossils. An examination of any woman’s magazine “beautiful at any age” issue would convince you that there is no woman (or man, for that matter) who lives past 60 and could s be considered handsome or beautiful. The fact that Lee is also obviously still virile (there are numerous love scenes, chastely shot) is also a gift to the AARP generation. That was unexpected and nice. Only a few films of the past decade have focused on characters in their golden years and done so sensitively. This is one of them.