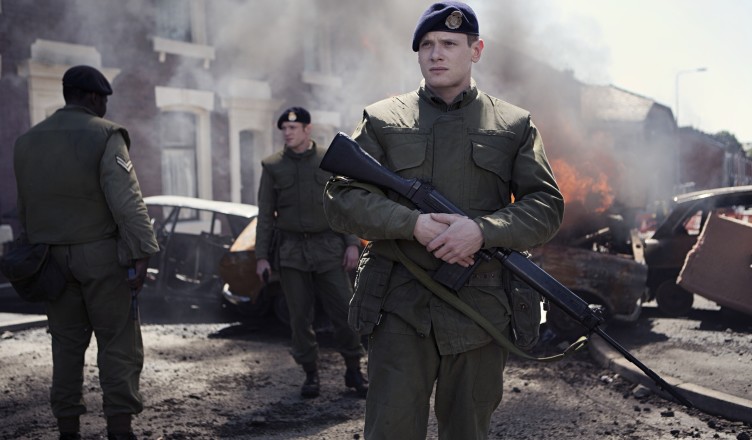 ’71 takes place over a single night in the life of a young British soldier (Jack O’Connell) accidentally abandoned by his unit following a riot on the streets of Belfast in 1971. Unable to tell friend from foe, and increasingly wary of his own comrades, he must survive the night alone and find his way to safety through a disorientating, alien and deadly landscape.

“’71” is a brutally unforgiving examination of a war driven at it’s core by the vicious hate that ripped Northern Ireland to shreds during what came to be known as the time of “The Troubles”.  It was an era of unconscionable violence, one in which fellow countrymen turned against each other with unmitigated hostility.  One barbaric atrocity beget another by way of retaliation in a relentless blood bath between Catholic IRA separatists and Protestants loyal to the British Crown.

That is my brief history lesson.  Now to my review of the movie.  I will begin by telling you that it is brilliantly directed with stark propinquity by Yann Demange, as he presents an uncompromising and riveting chronicle of an English soldier’s terrifying odyssey as he negotiates through a gutted Belfast night in search of the unit he was driven away from after narrowly escaping with his life from the bedlam of a raging street riot. I found Jack O’Connell to be superb as the combat-naive serviceman who, when asked if he is Catholic or Protestant, flatly responds that he doesn’t know.  It is inferred that he, along with his little brother, is an orphan.  There certainly seems to be no parental presence.  But we never actually come to conclusively know this, either.  What is understood is that here is a young man simply doing his job, one he will come to learn later in the film is to ostensibly serve as an expendable pawn in a much deeper and insidious political game.  It is a game which he, nor, truth be told, no one, can ever truly win.

Finally, I simply must insist that substantial recognition go to “’71″‘s Music Director David Holmes along with Film Editor Chris Wyatt.  The extraordinarily effective, and affecting, work of these two talents in tandem combine to make “’71” a production which absolutely demanded that I remained transfixed until the end.  And, at least to some extent, that it will linger hauntingly in my memory long thereafter.

'71: A Stark and Startling Chronicle of a Nation in Turmoil