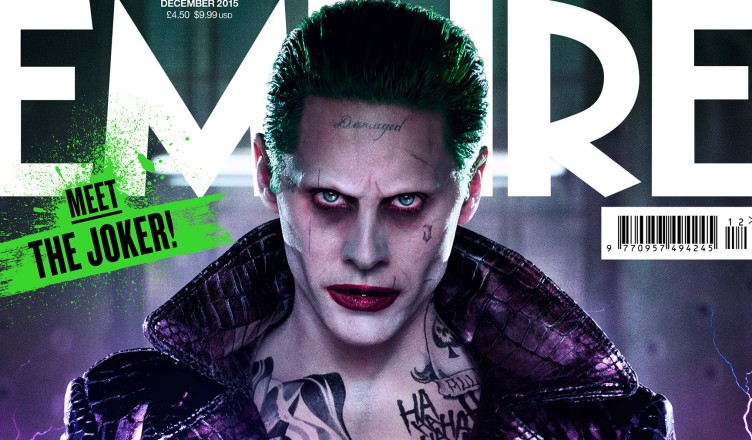 The teeth tattoos. HA HA HA all over the forearm. The shiny gloss all over. Now its fair to say that the new design for the Joker in Suicide Squad looks absolutely ridiculous.  We’ve gotten used to variations of the character over the decades and we’ve allowed directors and actors to stretch their artistic wings and give us different angles to look at the character to some fantastic results. (my favorite being the Martha Wayne Joker). Here’s a few reasons why this new take on the character is pretty neat:

Jared Leto is a method actor. The last guy to go method and play the Joker gave us this:

If we got ‘more of the same’ it would be pretty easy to predict exactly how this character would play out on the screen and worse yet we’d actually compare him to previous performances. What fun is a Joker if you know what to expect? With this new take on the Joker we are forced to critique Leto’s performance on its own merits. We can’t simply say “Jack Nicholson did it better” and instead this has forced the filmmakers to justify why this new take on the Joker should be accepted. It’s a bold move. It has to be intimidating to try to refresh a character that most people  grew up with and force us to consider a different approach.

This new Joker is a new type of crazy What we’ve seen in the past has varied from a brute gangster to a methodical genius and back again. This new Joker I think has the potential to showcase a happy stylistic medium. Now you can take one look at his grills and wonder ‘how smart is that’ but there’s a certain level of terror inspired by his appearance that can’t be ignored. The guy is trying to get a reaction from a glance and in that regard the new look of the Joker absolutely works in getting that reaction. He’s not the guy in the purple suit that makes you wonder “Who put this mime in a suit”. This joker makes you wonder “What the fuck is he up to?”

This Joker has a history Whenever we saw the Joker in film in the past he was a new face in Gotham and was introducing himself to our Dark Knight. This Joker has existed and has been operating for some time giving us a level of experience that we simply haven’t seen in film in the past. This isn’t a guy trying to make a name for himself, rather, this is the boogey man who already exists and has a reputation that inspires terror. He’s a living, breathing nightmare come to life and he’s experienced in his craft. This isn’t a guy trying to figure stuff out rather he’s a guy who knows exactly what to do to bring those nightmares to life.

Jared Leto is cut from the same cloth as Heath Ledger. This guy is downright scary with his method acting and I was not at all surprised when the principle actors from the film mentioned that they “never met the real Jared Leto”. The guy didn’t leave character at all throughout filming this movie. He gave Margot Robbie a rat for her birthday. It’s borderline terrifying when actors take this approach to acting because they risk themselves for identity dis-associative disorder and can actually lose aspects of themselves in their effort but we, the audience, are often treated to breathtaking performances.

NOW whether or not this Suicide Squad thing works out and provides us with a great movie is a completely different conversation. What I’m saying is that I wholly believe the Jared Leto’s Joker and Margot Robbie’s Harley Quinn are in prime position to be the highlights of the movie.