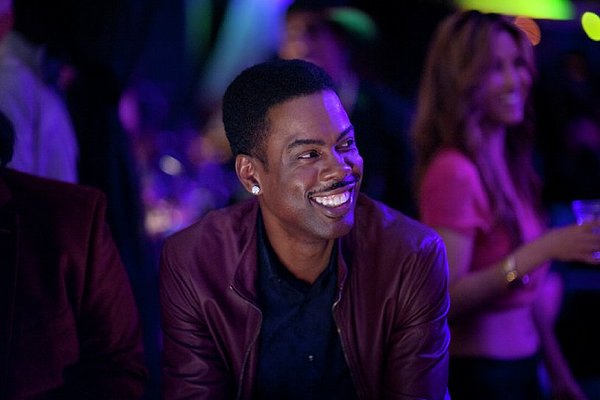 Pulsing with the rhythm of his greatest stand-up, Chris Rock’s TOP FIVE takes things to the next level, reveling in the high and the low, and blending a star-studded comedic romp with an irresistible romance. TOP FIVE digs under the surface of show business, politics, rap, and the exigencies of being black and famous today-holding it all up to the light in the way only Chris Rock can. Mingling echoes of Woody Allen and Dick Gregory with the energy of Kanye West and Jay Z, TOP FIVE is an original and radically new kind of American movie. Written, directed by, and starring Chris Rock, TOP FIVE tells the story of New York City comedian-turned-film star Andre Allen, whose unexpected encounter with a journalist (Rosario Dawson) forces him to confront the comedy career-and the past-that he’s left behind. Starring Chris Rock, Rosario Dawson, Kevin Hart, Tracy Morgan, Cedric The Entertainer, J.B. Smoove, Sherri Shepherd, Anders Holm, Romany Malco, Leslie Jones, Michael Che, and Jay Pharoah. The film is produced by Scott Rudin and Eli Bush. The Co-Producers are Shawn “Jay Z” Carter and Kanye West; the Executive Music Producer is Questlove. (C) Paramount

Chris Rock’s Top Five is a hilarious and very witty take on relationships for our diverse, media-driven, pop culture infused times. The perfect movie for the Holidays, Top Five will play very well for the next couple of week for the under-served African American community. However, here is some advice for all movie goers: if you love to laugh, Top Five if absolutely for you! Yes, it lightly touches upon racial issues in a comical way that will resonate more with black audiences than white (which we need during our current situation). Yet, I highly recommend Top Five for ALL adult audiences who like a little more thought to accompany the laughs with their movies. Chris Rock assembled an outstanding cast of mostly African American talent to come together to have a great time.

There was a lot to admire in Top Five, yet I have one major rave! The chemistry between Chris Rock and Rosario Dawson was so infectious and delightful. They were one of this year’s best cinematic duos to appear on screen. With long scenes of them walking down the street discussing various topics and gender issues, Chris Rock and Rosario Dawson displayed the raw emotions and authentic maturity of Ethan Hawke and Julie Delpy in Richard Linklater’s Before Sunrise, Sunset, Midnight movies. They were THAT terrific in Top Five!

The collaboration of an unlikely group of producers from Scott Rudin with JayZ and Kanye West sounds intriguing and completely worked! The adult skewing, sophisticated indie feel crossed with the behind the scenes look of the glamorous and famous media-savvy celebrity life succeeded.  All credit must be given to Chris Rock who wrote, directed, and starred in Top Five. No wonder quite a few studios aggressively pursued this movie at this year’s Toronto Film Festival before Paramount paid $11 million to acquire the title. When an acquisition is rushed to theaters this quickly, you know the studio has a winner! And it was money well spent. Ditto for audiences who see it.