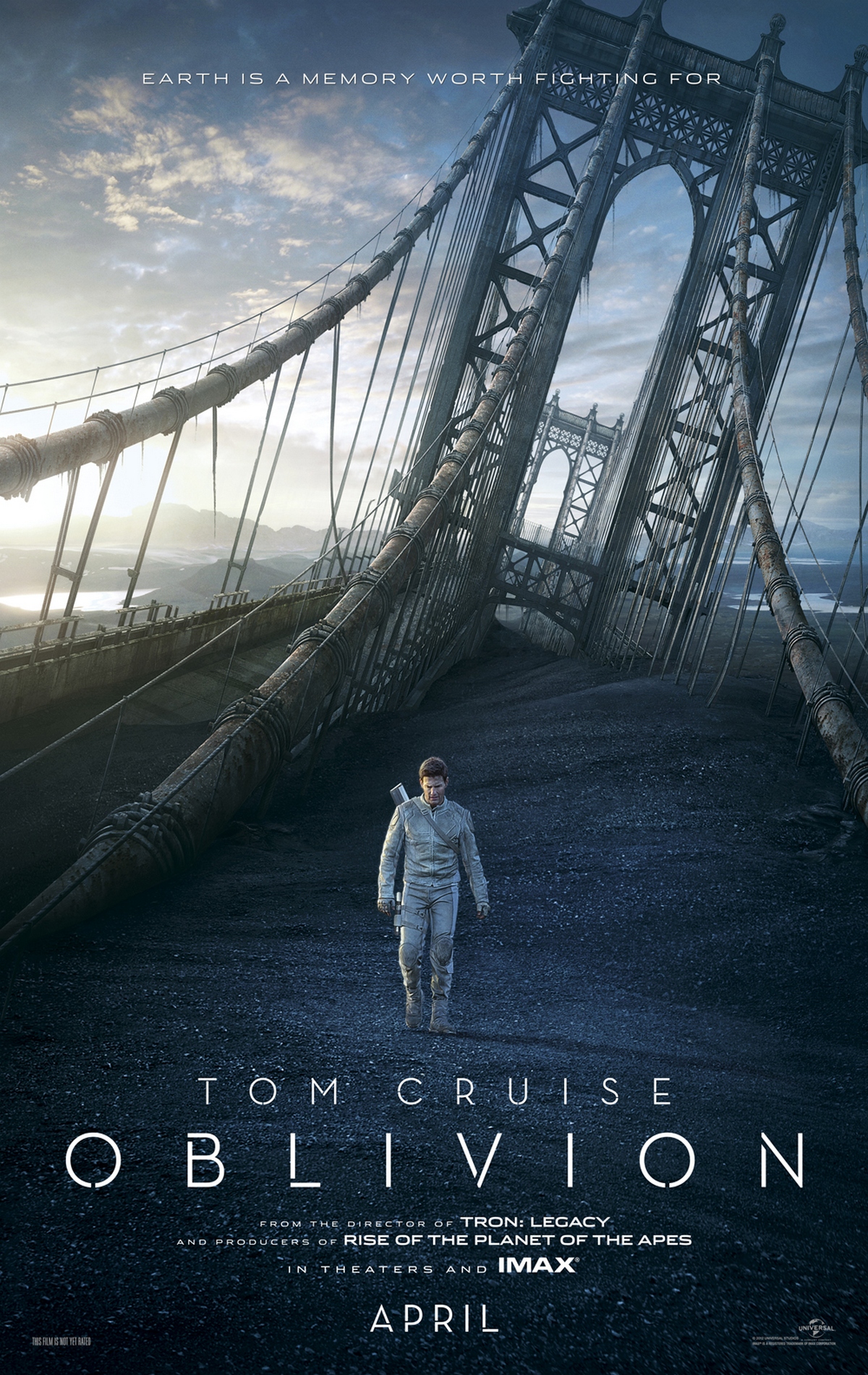 Tom Cruise stars in Oblivion, an original and groundbreaking cinematic event from the director of TRON: Legacy and the producer of Rise of the Planet of the Apes. On a spectacular future Earth that has evolved beyond recognition, one man’s confrontation with the past will lead him on a journey of redemption and discovery as he battles to save mankind.

This movie is a mind fuck. Tom Cruise stars as Jack Harper who is a conflicted man with a strong decent moral compass. He works hard and is dedicated to doing his part in what’s left of the world. He was the garbage man, literally picking up the pieces of humanity after a great war with a hostile alien threat. He’s a character I initially didn’t expect to ‘like’ but Jack grew on me and I found myself associating with his curiosity of  “the unknown ” beyond his boundaries.  I really enjoyed this movie, thanks in no small part to what Tom Cruise brought to the table, but also at the way the story found a way to seem unique and entertaining in an increasingly crowded sci-fi film market.

Oblivion is a fun yet confused movie that is incredibly entertaining yet suffers a bit from an identity crisis. The movie, unexpectedly, combines ideas and concepts that die hard sci-fi fans will find reminiscent into a benefit rather than a detriment. Oblivion seems like a refined and polished combination of borrowed ideas and focuses them into a film that doesn’t make the same mistakes to new success. It’s not a perfect story and certainly isn’t unique but it’s a polished and intriguing story that makes it seem so fresh. Tom Cruise is Tom Cruise. Now, it may not seem fair to use that as a description, but I think it’s fully applicable when describing someone who I rarely find “disappointing”. I may not like all of his film selection, but the man himself is pretty consistent with what he brings to a movie.  In the last 10 years or so Cruise has had few blemishes in the film selection department and with this role in Oblivion he maintains his solid streak. Jack Harper is a character that seemed unsettled at all times, and exhibits a habit to make impulsive and dangerous decisions. I rooted for him throughout the film and that’s pretty much the response that’s needed from the audience for his character.  They want us to like the guy, and I did. Heck, I even wanted to see him have a happy ending.

Morgan Freeman makes a glorified cameo. His appearances in the marketing materials is misleading and gives the impression that he has a larger role in this film. He’s there, but it’s a filler role so don’t let the glasses fool you as he’s no Morpheus character and Freeman likely fills this minor role simply to add star power. Further, I’m sorry to say that his character didn’t  seem all that distinguishable from any other Morgan Freeman charter to try to make his appearance any more significant  Olga Kurylenko gave a boring performance and could not bring any life to her character. A shame as I usually like the actress and I feel like this one could just be a result simple miscasting. Melissa Leo was fun and executed her performance perfectly. Andrea Riseborough was interesting but I’m indifferent toward her character.

I enjoyed the movie and I was digging the story until right around the 2nd or 3rd act of the movie when it makes a a major revelation. It’s a point in which the movie begins to heavily rely on ideas borrowed from other Sci-Fi films all the way to the end credits and doesn’t even deliver the ending that I felt the movie deserved. I started this review by saying that this film is a mind fuck because it’s no small feat to reach the level of immersion that Oblivion strives toward and then fumbles to the point that I felt like I was watching a twisted  remake of another film.  Still, I really enjoyed the movie and think it’s a great way to start the summer movie season early and is certainly worth a trip to the theater.

One thought on “Review: Oblivion”