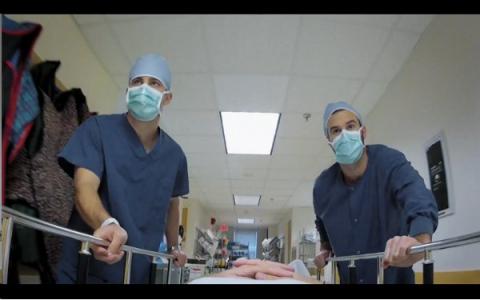 We normally don’t cover TV events at themovieblog, but this was an important movie that deserves the largest audience possible in a new platform release strategy the studios normally avoid. I ranked this pragmatic conservation starter on a broken Health Care System on my 2012 Documentary Top Ten List. As CNN struggles to make a name for itself for cable news, its reassuring to know that they are airing documentaries on their channel instead of resorting to partisan bickering. I hope this is something that pays off for the TV channel. care documentary Escape Fire brings up the analogy about the current state of American Health Care: its an uncontrollable inferno. One fireman compares it to smoke jumpers being killed in a fire and how this was foreseen  but left helpless. Take a look at these statistics presented in the movie about Americas health care system:

-In 2011, Americans spent $2.7 trillion for health care related services.
-This average spending is $8,000 per capita as the rest of the developed world spends $3,000, though our population is significantly less healthy!
-75% of our spending is for diseases that could be completely prevented with better lifestyle choices.

For a nation like America with bad habits of consuming without consequences, it seems tragically fitting that we cannot face the stark reality that eating too much bad food and popping prescription drugs are a rational and sustainable system to America’s health care. “Escape Fire” deals with this American pre-existing condition that hinders effective medical care. Take for example, war vets who have literal addictions to prescription drugs which where expensive pills are considered the one size fits all solution. An excellent point one talking head brings up while critiquing what they describe as a Health care management system:

Yikes! What a awful situation for any society, let alone the most prosperous to be trapped.
The strongest element of Escape Fire is it avoids emotional and finger pointing partisanship for actual ideas to solve the problem. What a concept. Dr. Andrew Weil claims that we must change our focus from disease intervention to disease prevention. Another Dr. Dean Ornish, preaches that certain personal lifestyle changes is vital for an industry and society to appropriately function. Without political soundbites, but with sound conviction, these medical experts prescribe the cures for Americas ailing health care problems.

One aspect “Escape Fire tackles is the notion of personal responsibility of diet and exercise. When Safeway offered health incentives for their employees, this lead to a decrease in costs. This concept of people taking responsibility for controlling  of their own health care has been lost in the partisan shuffle during the political discourse of fear driven rhetoric of government run health care or a system exclusively groomed for the wealthy. I keep hearing from health care professionals I know claim that if “everyone lost 30 pounds, health care costs would dramatically drop.” Easier said then done. How I wish a documentary like Escape Fire would be required viewing for educated voters and the D.C. politicians who should hold their feet to the fire.

This documentary couldn’t come at a better season as America makes crucial decisions on the destiny of a nation. How I wish a documentary like “Escape Fire” would be required viewing for educated voters and the  D.C. politicians who should hold their feet to the fire. Escape Fire provides a cure, now we just need to be willing to take the medicine. CNN is boldly going where no cable news outlet has gone before. Its a risk that’s worth supporting as a viewer and a consumer of health care!