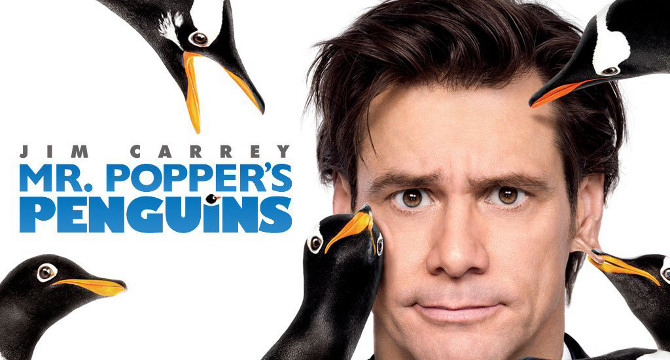 Synopsis: Thomas “Dylan” Popper Jr. (Jim Carrey) is a divorced realtor whose father traveled to many far places around the world during his childhood. When his father dies, a crate containing a gentoo penguin (Captain) shows up at his doorstep. Eventually, due to a miscommunication, more penguins arrive (Bitey, Stinky, Lovey, Nimrod, and Loudey), bringing the total to six. Popper initially intends to donate the penguins to a local zoo, but changes his mind when his children, Janie Popper (Madeline Carroll) and Billy Popper (Maxwell Perry Cotton), fall in love with the birds.

At the same time, Popper is given the task of buying Tavern on the Green, an old restaurant where he used to eat with his father as a child, with the intent of tearing it down and building a new development in its place. However, its elderly owner, Selma Van Gundy (Angela Lansbury), will only sell it to someone who she deems a person of true value.

Review: The picture quality of the BluRay was really bright, vivid, and sharp. Something I recently discovered with my Rise of the Planet of the Apes Blu Ray is that not all home releases will fill the screen on your home TV unless you find the specific aspect ration included on the back of the box. Mr. Popper’s Penguins thankfully filled every pixel of my 40 inch that I use, and was stunning upon first sight. The sound and picture help immerse a person in the film so that you can really take in and enjoy the performances of those on screen. I have a hard time watching movies that have bars on the top and bottom of the TV and feel that they are a detriment to the overall experience so I was relieved that this wouldn’t be an issue here.

A sticking point for me is always the performances of the lead cast members. The performances weren’t really disappointing but weren’t exceptional either and wound up being merely serviceable. Jim Carrey is as sharp and witty as ever but I was apprehensive that he may have lost some of his edge over the years. While watching this film you realize that not only does he still have ‘it’ but his punch line delivery, physical timing, and overall performance is as razor sharp. I saw plenty of shades of the old Carrey that I enjoyed and how he was able to transition that into a family film environment. No, I wasn’t wholly convinced that the man was a salesman but I was convinced that he was a father with daddy issues and it reminded me that Carrey can incorporate some decent levels of drama into his performances as needed and in this story it was fairly appropriate.

The story and dialogue in the film was entertaining if not overly simple and straightforward. There’s very little left to the imagination as far as the characters, their relationships, or where the story is heading as it seems the writers decided to spoon feed a simple plot in order to allow for easy ingestion. It works in this film, but there were a few times I had hoped that I couldn’t predict how the movie would proceed, especially upon the first site of Clark Gregg’s character Nat Jones.

Seeing Clark Gregg do his routine was a surprisingly enjoyable moment but makes me apprehensive that he may have been typecast. In his first appearance he does his exact introduction that he uses in the Marvel movies and it’s as if he was doing one of his cameo roles, but was given a new wardrobe and more screen time. Aside from that Nat Jones somewhat sets himself as the antagonist in this film pretty early on and I really enjoyed his role, even if it was ripped right out of the house of Marvel. Nat Jones isn’t an inherently ‘bad’ person just a little devious and is ultimately good natured and well intentioned. He has his own motives and feels that Popper’s penguins belong in a zoo rather than an apartment, and therein lies the conflict between him and Mr. Popper.

Overall: I enjoyed this movie more than I expected but I am a little relieved it wasn’t something I went out of my way to see in theaters. This movie is much better suited for home viewing. The story was pretty predictable but that didn’t affect my overall impression of this movie. The pacing was good, the acting serviceable, and more importantly the film was fun and funny as needed. This isn’t a breakout ‘Jim Carrey’ comedy but if you do intend to watch a family friendly movie and want it to include Jim Carrey you should certainly look out for Mr. Popper’s Penguins once it hits cable or network TV. If you have to own, then you might want to look at other offerings.