So it’s the day after we blow up the first Death Star and you’ve got to understand we were all feeling pretty damn sweet because no one gave us a chance in hell of pulling it off. Lots of hugs and high fives going around the room and life is good right?

So Han and Luke come up to me and tell me the three of us have to leave because there’s a medal ceremony to honor us for our part in blowing the shit out of the Death Star. “Sweet”, I say. So we head out to the Rebel Base’s main outdoor courtyard (why those dumb shits built a huge garden courtyard on a secret rebel hidden military base I’ll never figure out) and some douche in a uniform tells us he’ll give the signal when it’s time to walk down that long ass aisle. The guy gives us the green light and we walk out… and holy shit every single rebel has showed up for the ceremony.

As we get closer and closer to the stage I get kinda misty eyed. To feel this sort of recognition and appreciation from my new rebel peers was pretty special, especially doing it along side my good old pal Han.

So there I was, up at the front, having just strolled down the aisle with Han and Luke… me… the guy who brought Obi-Wan to Han in the first place, the guy who talked that chicken shit Han into going back to get into the Death Star fight, the guy they never would have escaped the Death Star without in the first place. There I was watching Luke get his medal. Then watching Han get his medal. This is when things went tits up for me.

I start to take a step towards the princess to get my medal, and all of a sudden Luke and Han turn around and everyone starts cheering. I looked up and realized there were no more medals. 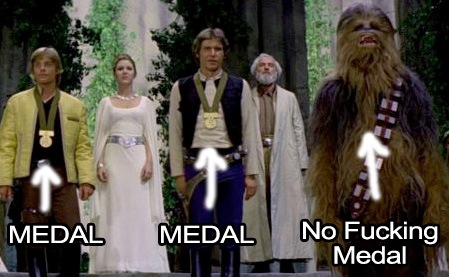 Look, I’ve never been a glory hog, so it doesn’t KILL me that I didn’t get a medal. But why in Yoda’s name would you get me to walk down the aisle, stand up at the stage, and then leave me standing there with my gigantic Wookie dick in my hands? Now I look like a total dick in front of the whole damn rebel alliance. They probably all thought I was just desperate for attention and just had to tag along.

You all didn’t see it, but about 3 seconds after your movie screen went black and the credits started, I turned around and punched Han square in the nut sack, then squatted and took a dump on the royal stage, gave everyone the finger and marched off. I mean… screw that right?

32 thoughts on “Special Guest Contributor Chewbacca: Where The Fuck Is MY Medal?”