Everyone loves Top Ten lists, but mostly so they can disagree with them. That is the beauty of film. Its all subjective to your own personal tastes and preferences. So this intrepid blogger, Dan Meth has created his own visual ranking system specific to Trilogies.

Dan Meth has created something he calls “The Trilogy Meter”, a graphical representation of the enjoyment level of some of the most notable movies in film history. 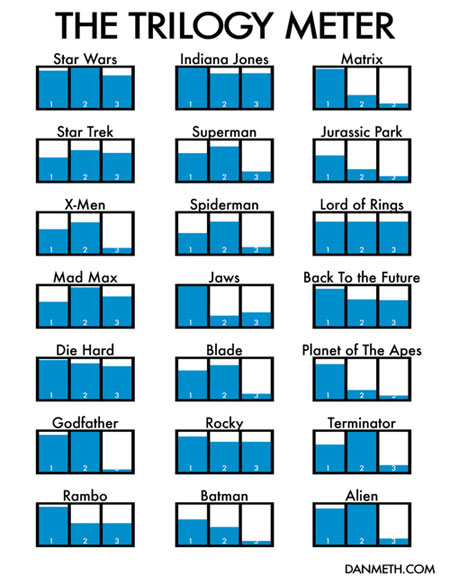 I can completely agree on the Matrix Meter, though I agree with /Film and think Die Hard 2 should have been way lower on the graph before bouncing back on 3. X Men 3 however my least favourite of the trio, I wouldn’t have ranked so low.

Obviously some of these are no longer trilogies, but the concept still applies. Still a very cool idea.

68 thoughts on “Introducing The Trilogy Meter”