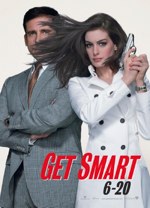 Thanks for checking out our Get Smart Review. There is no video version of the Get Smart review, but we will discuss it in an upcoming podcast.
Right from the beginning I was excited about the news that there would be a Get Smart movie. Get Smart was one of those old TV shows that was in heavy re-runs when I was a kids, so I used to watch it all the time right after The Flinstons on my lunch break from school (I lived really close to the school). When the word came down that Steve Carell had been given the responsibility of filling the mighty shoes of Don Adams, I was ecstatic! The phrase “perfect casting” is thrown around way too often, but this is a situation where it applied pretty well. Hearing Anne Hathaway is in something is never bad news… add recent Oscar winner Alan Arkin, Dwaye “no longer The Rock” Johnson, Terence Stamp and Ken Davitian… you’ve got a very nice little line up.

Sadly, the trailers and various promotions for Get Smart didn’t inspire a lot of hope… so how did it turn out? Meh, not as bad as I thought, but certainly no where near as good as I had hoped.

The synopsis for Get Smart looks something like this: “Bungling secret agent Maxwell Smart, also known as Agent 86 for CONTROL, is on a mission to battle the forces of their evil crime nemesis known as KAOS with his more-competent partner Agent 99, (whose real name is never revealed) at his side. When the headquarters of U.S. spy agency Control is attacked and the identities of its agents compromised, the Chief has no choice but to promote his ever-eager analyst Maxwell Smart, who has always dreams of working in the field alongside stalwart superstar Agent 23. Smart will do whatever it takes to thwart the latest plot for world domination by KAOS.”

Damn. Yay I say again unto thee… DDDAAMMMNNN Anne Hathaway is HOT! No, strike that… she’s beyond that level of hotness for which we haven’t yet come up with a word for. Playing agent 99, Hathaway needed to play a stunningly, and disarmingly beautiful woman… and wow, yeah… just yeah. I’ve never seen her look better, or come across and more flat out shockingly beautiful and sexy than she does in Get Smart. Surprisingly enough she also seemed to play light spoof comedy quite well. I’m sorry, but I’m still distracted by how good she looked in this film.

The movie did a solid job of paying homage to much of the things and spirt of the original show. The use of a shoe phone was especially good. It’s a special challenge to take a show from the 60’s and turn it into a modern film while still maintaning the essence and feel of the original. Get Smart accomplishes this and that fact alone almost made the film worth the time and effort to see.

Steve Carell was born to play this role. Don’t get me wrong, I’m not saying he completely knocked it out of the park or anything, but he IS Maxwell Smart almost every bit as Don Adams was. He played smart perfectly, without ever making it seem like he was trying to be Don Adams at the same time. I don’t know how he did that… but he did. His timing and character carry much of the movie for most of the run time.

The film was “cute”. That’s not a bad thing. When you do a movie like Get Smart, it’s actually got to be “cute” in places if it’s going to be loyal to the original material, and it did. Sadly it wasn’t nearly as hilarious (I’ll get to that in just a minute) but it was indeed certainly cute in places and put a grin on your face.

All the cast did a fine job… not spectacular, but solid. Stamp, Arkin, Davitian, The Great Khalli (monster WWE wrestler who was also in Adam Sandler’s The Longest Yard”) all get a passing grade… but I gotta say Dwayne Johnson was the strongest of them. I honestly don’t know how good of an actor he’ll eventually be, but the man has so much frigging damn charm and charisma that it almost doesn’t matter. He could play these kind of roles for the rest of his career and he’d do just fine.

There’s a really great sky diving action scene in the film that I just loved. I won’t give anything away, but watch for it if you see the movie.

I’ve said this many many many times but it needs to be repeated here. One of the things you totally MUST have to make a comedy work is laughs. While Get Smart has a few here and there scattered throughout the film, sadly it doesn’t have nearly enough to honor its namesake or to make it a worthwhile time at the movies. Yes, the film is cute. Yes the movie pays proper tribute to the original…. but as a motion picture at some point it has to stand on its own two proverbial feet and make us LAUGH. Get Smart failed to do that enough and sadly that ends up being the biggest impression that stuck in my mind as I walked out of the theater. Despite all the good things I can say about Get Smart, this is the most important part it needed to nail. And it didn’t.

A great idea for a film with a very solid cast, a wonderful sense of tribute paid to the original, cute and simple… yet sadly Get Smart ultimately fails because despite succeeding on so many levels, as a comedy it stumbled on the most important one… COMEDY. Just simply not enough of it, and the stuff that was there just wasn’t quality enough. And as a comedy, at that end of the day nothing else matters if that’s not there first. Certainly not a “bad” movie, but it should have been much much better, especially when you consider how many other quality elements (that a lot of other comedies miss) were in place. Overall, I give Get Smart a 5 out of 10.

54 thoughts on “Get Smart Review”