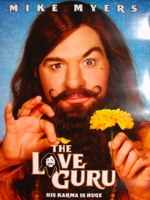 Thanks for checking out our The Love Guru Review. We unfortunately don’t have a video version of The Love Guru review, but we will discuss it in an upcoming podcast.

For all intents and purposes, we haven’t seen Mike Myers in anything non-Shrek related in over 5 years which has always been confusing and frustrating to me. Right up front I’ll let you know that I simply LOVE Mike Myers. Most people associate him with his Austin Powers films (and why not? Combined the 3 Austin Powers movies have cost just under $110 million to produce and have made over $660 million world wide), but for me, his best film (and one that I think is one of the best comedies ever, and certainly one of the most under appreciated) will always be “So I married an Axe Murderer”. But really, his whole career for the past decade seems to be nothing more than Austin Powers and Shrek.

When I first heard about The Love Guru and Mike Myers returning to lead in a comedy, I thought it sounded just hilarious and I was excited. Then the trailers came out… and without a doubt the film looked like the worst film Myers has ever been involved in, and one of the worst films of the year. As the release date got closer and closer, the new trailers only made that sick feeling in my stomach even stronger. So off I went to see The Love Guru… was it as awful at is looked? Actually no… but still not good.

The synopsis for The Love Guru looks something like this: “Austin Powers trilogy star Mike Myers collaborates with writer Graham Gordy for this comedy concerning a self-help guru named Pitka (Myers), who devotes his life to unknotting the romantic entanglements of troubled couples. As a young child, Pitka is abandoned at the gates of an ashram in India and taken in by kindly gurus. An American by birth, Pitka absorbs the lessons taught to him by his teachers and later returns to the United States to become a leading authority on spirituality and self-help. While Pitka’s methods are decidedly unorthodox, they may be the only means of ensuring that the Toronto Maple Leafs win the coveted Stanley Cup. The Maple Leaf’s star Darren Roanoke (Romany Malco) is in trouble. His estranged wife has recently begun dating L.A. Kings star Jacques Grande (Justin Timberlake) in a vengeful effort to send her husband’s career into a tailspin, and when Roanoke starts to falter on the ice, the whole team starts to suffer. As their visions of leading the Toronto Maple Leafs to the Stanley Cup are quickly going up in flames, team owner Jane Bullard (Jessica Alba) and Coach Cherkov (Verne Troyer) enlist the aid of the world’s best-known relationship expert in restoring the peace between Roanoke and his wife, and getting their team back on the track to the championships.”

Ok, I admit that I’m biased because I’m a die hard Toronto Maple Leafs fan to the point that I bleed Blue and White… and Mike Myers is also a fanatic Leafs fan… so seeing a movie with the Toronto Maple Leafs making a run for the Stanley Cup (something that I’ll probably never see actually happen in real life in my lifetime) was a real kick for me. Yay! Go Leafs Go!

Stephen Colbert’s small role as a Hockey Night In Canada commentator was quite good. Sure, it’s the type of role we see in tons of sports movies (best of all of them was probably Bob Uecker in the Major League movies… damn he was hilarious in those), and even Mike Myers himself did the same sort of thing in Mystery Alaska). Colbert is just a funny funny man.

I gotta give this up to The Love Guru… it was funnier than I thought it would be. Now keep in mind, that’s not hard considering I didn’t suspect that I’d laugh at all. The movie isn’t hilarious… but there were a few decent laugh moments that hit the mark and had me giggling. Having said that….

Not enough laughs. Yes it was funnier than I thought it would be, but even that wasn’t nearly enough. So many of the jokes were just old recycled Austin Powers gags that much of the film just felt sad and desperate instead of fresh and funny (almost none of this movie felt fresh). They even brought mini-me back (played by Verne Troyer, who was actually funnier than Myers in this movie) to re-do a lot of the Austin Powers jokes. Like I said, more sad than anything else.

Dear sweet heavens Justin Timberlake was AWFUL. How hard is it just to play a simple little silly farce character? Well… I guess the answer is harder than Timberlake can handle, because he SUCKED in this flick. I thought he’d actually be “ok” in this movie because his role required absolutely no talent, and when we’ve seen him doing just brainless sketch comedy on Saturday Night Live, he’s been not bad… but wow he totally crapped the bed. Just dreadful. He made the movie look and feel like a second rate high school drama class comedy skit.

Really… what can I say about Jessica Alba and her ineptness that I haven’t said before. She was awful. Having said that, I will admit she looked really good when they did some musical numbers and she was dressed up in traditional India female garb and was dancing around. Very cute actually. Still, I’ve said it before and I’ll say it again… the only movies Jessica Alba should be headlining are ones that end in the words “… Does Dallas”.

This kills me to say… it hurts me deep… but Myers just didn’t bring it, plain and simple. As I mentioned earlier, the humor didn’t feel new or original or fresh at all. He felt… well… old. it was all just recycled, it was all done before by him. The Guru Pitka is really just Austin Powers in a beard. We all knew it was going to be ridiculous, we all knew there was going to be silliness… but to wait so many years to get Myers on screen again leading a comedy only to have him deliver nothing but Austin Powers 2.0 was a seriously let down. Yes, Myers had his moments in the movie, but it wasn’t nearly enough.

Not the total pile of trash that I was expecting it to be, The Love Guru did deliver a few laughs scattered throughout the film, but ultimately it wasn’t nearly enough… and where “Get Smart” had lots of solid supporting elements, The Love Guru had nothing but garbage around the comedy. Horrible supporting cast, terrible execution, old tired and “done before” feeling humor. It was NOT the Myers return we had been hoping for. Not a total train wreck of a movie, but a wreck nonetheless. Overall I give The Love Guru a 3 out of 10.

25 thoughts on “The Love Guru Review”