Ok this made me smile a lot and I ended up reading it about 3 times. We’ve all seen the various 9/11 conspiracy theory videos, well, now there is compelling evidence suggesting that the mighty Death Star was NOT destroyed by some farmer kid firing torpedos down a 2 meter wide exhaust shaft! The following suggests that perhaps there was an inside job conspiracy! This may shock you… read at your own risk!

We’ve all heard the “official conspiracy theory” of the Death Star attack. We all know about Luke Skywalker and his ragtag bunch of rebels, how they mounted a foolhardy attack on the most powerful, well-defended battle station ever built. And we’ve all seen the video over, and over, and over, of the one-in-a-million shot that resulted in a massive chain reaction that not just damaged, but completely obliterated that massive technological wonder.

Like many, I was fed this story when I was growing up. But as I watched the video, I began to realize that all was not as it seemed. And the more I questioned the official story, the deeper into the rabbit hole I went.

Presented here are some of the results of my soul-searching regarding this painful event. Like many citizens, I have many questions that I would like answered: was the mighty Imperial government really too incompetent to prevent a handful of untrained nerf-herders from destroying one of their most prized assets? Or are they hiding something from us? Who was really behind the attack? Why did they want the Death Star destroyed? No matter what the answers, we have a problem.

Below is a summary of my book, Uncomfortable Questions: An Analysis of the Death Star Attack, which presents compelling evidence that we all may be the victims of a fraud of immense proportions.

1) Why were a handful of rebel fighters able to penetrate the defenses of a battle station that had the capability of destroying an entire planet and the defenses to ward off several fleets of battle ships?

2) Why did Grand Moff Tarkin refuse to deploy the station’s large fleet of TIE Fighters until it was too late? Was he acting on orders from somebody to not shoot down the rebel attack force? If so, who, and why?

3) Why was the rebel pilot who supposedly destroyed the Death Star reported to be on the Death Star days, maybe hours, prior to its destruction? Why was he allowed to escape, and why were several individuals dressed in Stormtrooper uniforms seen helping him?

4) Why has there not been an investigation into allegations that Darth Vader, the second-ranking member of the Imperial Government, is in fact the father of the pilot who allegedly destroyed the Death Star?

5) Why did Lord Vader decide to break all protocols and personally pilot a lightly armored TIE Fighter? Conveniently, this placed Lord Vader outside of the Death Star when it was destroyed, where he was also conveniently able to escape from a large-sized rebel fleet that had just routed the Imperial forces. Why would Lord Vader, one of the highest ranking members of the Imperial Government, suddenly decide to fly away from the Death Star in the middle of a battle? Did he know something that the rest of the Imperial Navy didn’t?

In the video of the Death Star’s destruction, Lord Vader clearly exclaims “I have you now” then fires two shots. Those shots never impact — anywhere. Were they merely “added” to the “official” video after the event to make it appear that Lord Vader had at least attempted to fight off his alleged son?

Emperor Palpatine fails to act after being informed of the attack 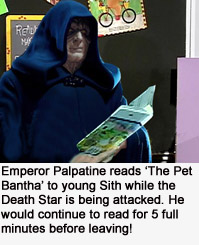 6) Nerf-Herders defy the laws of physics? How could any pilot shoot a missile into a 2 meter-wide exhaust port, let alone a pilot with no formal training, whose only claim to fame was his ability to “bullseye womprats” on Tatooine? This shot, according to one pilot, would be “impossible, even for a computer.” Yet, according to additional evidence, the pilot who allegedly fired the missile turned off his targeting computer when he was supposedly firing the shot that destroyed the Death Star. How did the missile make a right angle turn after entering the exhaust port? How could a missile shot in the vacuum of space–that would tend to keep going in the same direction as it was released, according to the laws of physics–be *sucked* into an *exhaust* pipe? “Exhaust” means to exhale or blow out… Wouldn’t the missiles have been blown awry of their target rather than sucked in? If it had been an intake pipe, then the “bending” path of the missiles could be plausible. Why have these discrepancies never been investigated, let alone explained?

7) Why has their been no investigation into evidence that the droids who provided the rebels with the Death Star plans were once owned by none other than Lord Vader himself, and were found, conveniently, by the pilot who destroyed the Death Star, and who is also believed to be Lord Vader’s son? Evidence also shows that the droids were brought to one Ben Kenobi, who, records indicate, was Darth Vader’s teacher many years earlier! Are all these personal connections between the conspirators and a key figure in the Imperial government supposed to be coincidences?

9) Prior to the destruction of the Death Star a smuggler named Captain Solo was reportedly given a large sum of money. At a crucial point in the battle, Captain Solo had an unobstructed shot on his choice of the fighters pursuing Skywalker, yet Solo did not take advantage of this opportunity to kill Darth Vader. Although Vader was in the process of firing upon Skywalker’s X-wing, Solo attacked the defensive fighter instead. In the aftermath, Vader escaped, while Solo still had crates of money in his cargo hold. Captain Solo eventually made his way to the Bespin system, where he was seen dining with none other than Vader, who was reportedly obsessed with obtaining Captain Solo’s ship (and the money contained therein). Solo’s ship was then seen flying into the super-structure of the second Death Star, destroying it just after Vader was able to get out (he was seen leaving a shuttle piloted by none other than Luke Skywalker). Yet through this whole sequence of events, the money was never seen removed from Solo’s ship. Was it used to bribe Darth Vader, who (allegedly) assassinated Palpatine? Did anyone other than Vader and Skywalker actually see Emperor Palpatine die?

10 ) During pilot debriefing we leaned that Obi Wan was the one who told Luke to turn off his targeting computer. He said he was told by Obi Wan to “Let go” and “Trust me”. This is the same Obi Wan who was, according to the official story, killed after sabotaging the Death Star by none other than Darth Vader BEFORE speaking to Luke. His convenient death places him inside the Death Star just before the explosions on the surface occur. By faking his death Vader would have given Obi Wan time to plant explosives. The only evidence of his death is his Jedi robe on surveillance cameras. And even that can’t be found because they decided to conveniently let the evidence burn in the planet atmosphere. Also, why are there reports from Endor that Lord Vader, Obi Wan and Yoda were seen together AFTER their deaths? And who other than the Empire has the capacity to fake their deaths?

12) Why did the captain of the Imperial Stardestroyer not fire upon the lifepod with the droids carrying Death Star plans? The “official story” says he didn’t find the any signs of life. He said “Hold your fire. There are no life forms. It must have been short-circuited.” Why would he be looking for life when it was electronic plans he should have been looking for. Why did he jump to the conclusion it was “short-circuited”. Is he a lifepod engineer?

How can all this be just incompetence and coincidence? IMPOSSIBLE!

The most important question of all is why would a shadowy group in the Empire want to destroy such a technological wonder? Is it an excuse to invade Hoth and steal their oil; a planet which didn’t have anything to do with the attacks. Or is it to take away your religious freedoms to practice the dark side of the force? As incredible as this sounds it makes more sense than the official story.

Well, I’m convinced. “Use the force Luke” my ass! This was clearly an inside job! :P