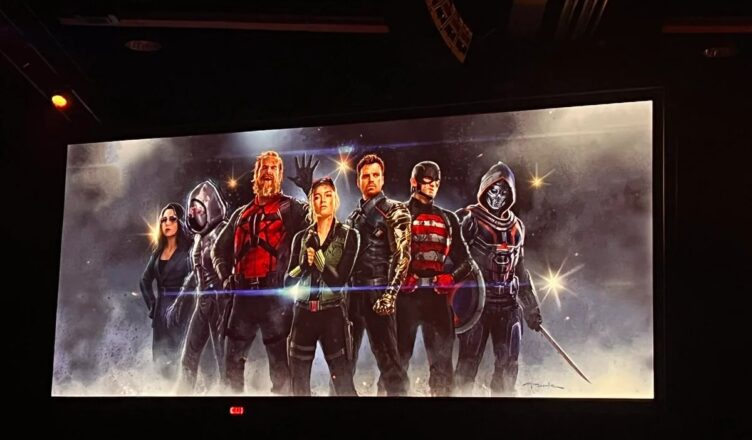 Marvel Studios is giving fans our first look at the new MCU feature film, The Thunderbolts at Disney D23. The Thunderbolts are a new team to the MCU, but they are made up of previously seen characters. The team will be Yelena, Red Guardian, Taskmaster, Winter Soldier, Ghost, and US Agent. The Thunderbolts will be led by Valentina Allegra de Fontaine (Julia Louis-Dreyfus) and will likely be brought together to face a threat they couldn’t handle alone. No details regarding the project have been released but we can surmise that they will be facing a “big bad” or maybe even a team of villains.

At the D23 Expo, Marvel Studios released the very first image of The Thunderbolts. The picture features Yelena, Red Guardian, Taskmaster, Winter Soldier, Ghost, US Agent, and Valentina Allegra de Fontaine. The project will begin shooting next year and is slated for release on July 26, 2024. Marvel has been very secretive regarding the project but at least we know who is on the team and what they look like together. The synopsis describes the team as a group of supervillains; however, that doesn’t seem that accurate. Yelena and Red Guardian are certainly heroes, as are Winter Solider and US Agent. Sure they all have troubled pasts, but that doesn’t make them evil. The film is still two years away so Marvel will likely release more details about the film in the next year or so.

#Thunderbolts gave us a first look at the team. #D23Expo
Yelena, Red Guardian, taskmaster, Winter Soldier, Ghost, and US Agent. Team will be led by Val. Starts shooting next year. pic.twitter.com/GThhq4uK7v

I think this picture of The Thunderbolts looks great. I also think it’s awesome that Marvel is revealing the team so early. Now the rumor mill can focus on other unknown castings like the Fantastic Four film. I also dig the fact that it’s basically a team of leftover characters. Each one was a side character in someone else’s movie and now that they are part of a team, they will really get a chance to shine.

It’s hard to say who will be the top-billed actor and leader of The Thunderbolts. My money is on David Harbour as Red Guardian or Florence Pugh as Yelena. It may be too early to speculate but those two are where I think the smart money is. I do like that they are bringing Taskmaster and Ghost back. Both were interesting characters that deserve a second chance. You can catch The Thunderbolts in all of their glory when the film hits theaters on July 26, 2024.

Film Synopsis: A group of supervillains are recruited to go on missions for the government.