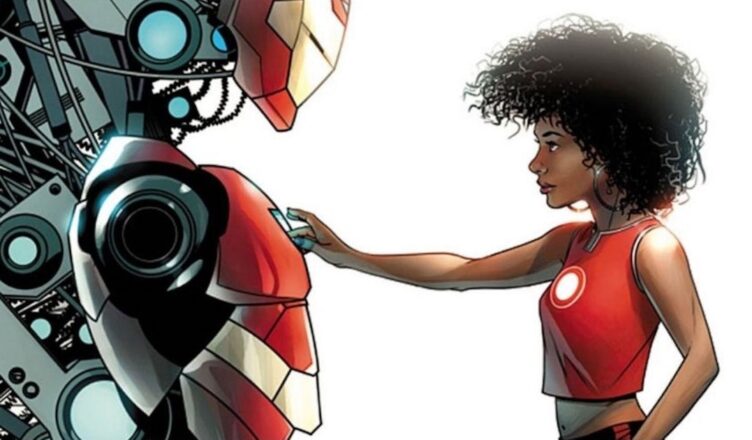 New behind-the-scenes set photos from Ironheart give us a good look at Dominique Thorne as Riri Williams aka Ironheart. The new Disney Plus series Ironheart is set to premiere in 2023 and will feature the acting talents of Dominique Thorne, Alden Ehrenreich, and Anthony Ramos. The series follows young inventor Riri Williams who creates her very own version of the Iron Man armor. Very few details have been released regarding the series, but thanks to some leaked merchandise, we know Ironheart will make her debut in the upcoming film Black Panther: Wakanda Forever.

Riri Williams aka Ironheart has a short history in Marvel Comics and first premiered in Invincible Iron Man (Vol. 3) #7 in 2016. The character is often portrayed as a teen who through her own genius, invents her very own version of the Iron Man armor.  After reverse-engineering technology from Tony Stark’s outdated armor, Riri Williams dons the suit and becomes the hero, Ironheart. She is often put on a team with other young avengers such as Squirrel Girl, Ms. Marvel, America Chavez, and Amadeus Cho and she even teams up with Iron Man himself. She’s increased in popularity over years and has been featured in several cartoons including Marvel’s Spider-Man.

Thanks to a Reddit post from MSSmods on the subreddit r/MarvelStudiosSpoilers, we have our very first look at Dominique Thorne and her full suit on the set of Ironheart. The suit looks awesome in the second picture, but it’s important to know that this is going to be a heavily CGI’d suit. Usually, you see suits like this like what Robert Downey Jr. wore when they shot Avengers: Infinity War. She basically looks like Dominque Thorne in pajamas in the first picture. It’s a baseline piece of armor that they CGI over. The fourth and fifth pictures feature Anthony Ramos as the series’ villain, who is rumored to be Parker Robbins aka The Hood. Robbins dons a magical cloak that imbues him with mystical powers. And as you can see from the photos, he’s wearing a cloak with a comic-book-accurate look. You can see all the photos below:

To be honest, I wasn’t excited about the set photos until I saw the full set of Ironheart armor. That armor looks amazing. Like a homemade version of the War Machine armor. Usually, Ironheart’s suit is very sleek and elegant. This is not that. It’s about the complete opposite of elegant and I love it. It will make her much more formidable as she battles Robbins or whoever she is fighting. Marvel has been crushing it with its series and I have no doubt Ironheart will continue the trend. Usually set photos don’t move the dial for me, but these have got me legit excited for this series. I will also say that the suit looks way better than the suit we saw in the leaked merchandise. Sadly, we’ll have to wait at least until next year for the series to premiere, but  Black Panther: Wakanda Forever is set to open in theaters on November 11th.