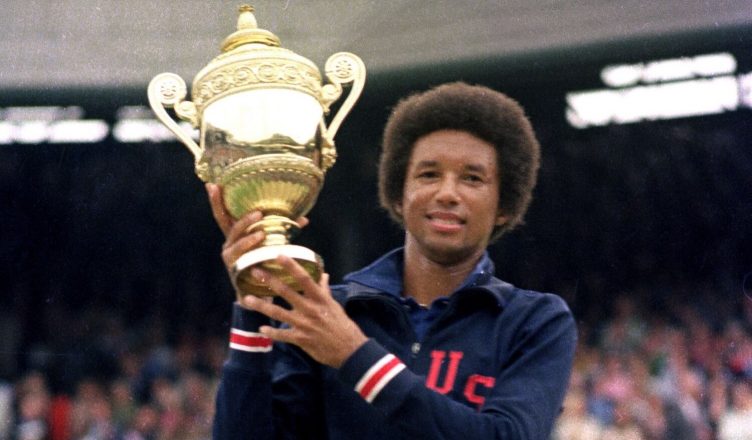 Sam Pollard, who directed “MLK/FBI” and “Sammy Davis, Jr.: I’ve Gotta’ Be Me,” has teamed with Rex Miller— listed as both the Director and Cinematographer—to produce an informative 96-minute documentary entitled “Citizen Ashe.”

The film traces Arthur Ashe’s career as the first and best Black male tennis player. Ashe was the first Black man to win the U.S. Open, the Australian Open, and Wimbledon. Along the way, talking heads including John McEnroe, Billie Jean King, Ashe’s younger brother Johnny, and various luminaries of the sports world talk about this amazing athlete who was born In 1943 and died of AIDS-related pneumonia at the age of 49 in 1993. Ashe’s widow, Jeannie Moutoussamy-Ashe was Executive Producer for the film. The entertaining, thoughtful documentary testifies to Ashe’s spoken goal: “I want to be the Jackie Robinson of tennis.”

Born in Richmond, Virginia to a mother (Mattie) who died at age 27 from heart-related disorders  when he was only 6, it is worth noting that Ashe was the documented descendant of a West African woman brought to America in 1735 aboard the slave ship Daddington and subsequently owned by North Carolina Governor Samuel Ashe.

Growing up in the segregated South, Ashe was fortunate that his father was in charge of a Richmond, Virginia sports complex, Brookfield Park. The park  in Richmond  included basketball courts, a pool, 3 baseball diamonds and 4 tennis courts. Ashe started playing tennis on the courts there at the age of 7 and was ultimately noticed and given instruction by a local physician, Dr. Johnson, a tennis enthusiast who had built a tennis court in his own back yard and had coached Althea Gibson.

Still, Black players were denied participation in many tournaments and could not use the indoor courts in Richmond, so Ashe relocated to St. Louis’ Sumner High School at the invitation of 62-year-old teacher Richard Hudlin to complete his high school education. While there, with Ashe on the team, Sumner High won the United States Interscholastic Tennis Tournament.

Ashe was offered a scholarship to the University of California in Los Angeles in 1963 and headed off to Los Angeles, while also involved with ROTC that would lead to 2 years in the Army to help him with college expenses (he was assigned to West Point and put in charge of their tennis program).

In 1963 Ashe was named the #1 player in the world and was #3 in 1965. His entire life changed with the much more accepting nature of racial interaction in California. Other athletes were beginning to speak out against racism, with moments like the raised fists of John Carlos and Tommy Smith at the 1968 Summer Olympics.

Ashe found himself torn between his own impulses, learned at his father’s knee, [“Don’t do anything that will hurt yourself later.”] and his sympathy for the Black athletes who were demonstrating and standing up for their rights. As Ashe said, “If you were a moderate, it was the same thing as being an Uncle Tom.”   In an interview, Ashe acknowledges that, “Being the only one, I’m a drawing card, whether I like it or not.”

As a “drawing card,” other Black athletes were pressuring the tennis star to join them in protests against unequal treatment. He responded to calls to boycott the Olympics by saying, “That’s not my way.” But he allowed that hanging back from joining the movement caused him to feel that “I didn’t like myself very much.”

As the documentary puts it, “There was a new breed of Black athlete.”  Arthur, as a child, had been taught to return every ball within two inches of the line and never argue with an umpire’s decision, so protest of a strident sort was not his upbringing.

In these years, the country seemed to be coming apart with the assassination of JFK, RFK, and MLK. Fifty thousand National Guard troops were quelling riots in the streets of U.S. cities. Robert F. Kennedy’s assassination hit Arthur particularly hard, as he had been with him RFK on the campaign trail in June of 1968, just the day before he was assassinated at the Ambassador Hotel in Los Angeles.

South Africa’s policy of apartheid also became a cause that Ashe invested in, with a sincere admiration and a growing friendship with Nelson Mandela arising from Mandela’s 27-year imprisonment for the cause of equal rights.

Just as President Barack Obama modeled on Mandela, so, too, did Arthur Ashe. It was, he said, a great honor and privilege to get to meet Mandela and to become a personal friend.

Ashe is quoted as saying that he wanted to rebut the commonly held misconception that athletes were “all brawn, no brains.” He did that with his masterfully planned victory over Jimmy Connors in the 1975 Wimbledon Finals. Ashe countered Connors’ technique of serving the ball by hitting it on the rise by taking the pace off the ball. He gave Connors only soft junk shots (dinks, drop shots and lobs) to deal with.  Ashe won the match and the title at the age of 32.

We see McEnroe acting like a jerk in old footage and commenting on Ashe’s supervision of him on the Rider Cup teams. (McEnroe consistently played on Rider Cup teams for 12 years, (while Jimmy Connors refused to do so and even lodged a lawsuit against Ashe at one point over their differing opinions on what the Davis Cup play meant to the nation).

Arthur Ashe’s widow, Jeanne, ends the film sharing Arthur’s words: “We both want to distress the comfortable and comfort the distressed.” Commenting on how losing a kind soul like Arthur Ashe illustrates what a treasure he was during life, Jeanne talked about their adopted daughter Camera, who lost her dad at the age of 7, just as Arthur, himself, had lost his own mother to heart disease when he was only 6.

Arthur Ashe’s funeral attracted 6,000 mourners and then Governor Douglas Wilder allowed his body to lay in state at the Governor’s Mansion in Richmond, where an additional 5,000 mourners paid their respects. Andrew Young, who had married Ashe in 1977, buried him after a service held at the Arthur Ashe Athletic Center on February 10, 1993. Ashe was buried next to his mother, Mattie, who was only 27 when she died.

The action shots of Ashe and tennis contemporaries in action were well-chosen. His demeanor in all recorded interviews or appearances illustrate how a champion should behave A clip is included in the documentary that shows Obama saying that the two athletes that he most emulated and admired were Muhammad Ali and Arthur Ashe.