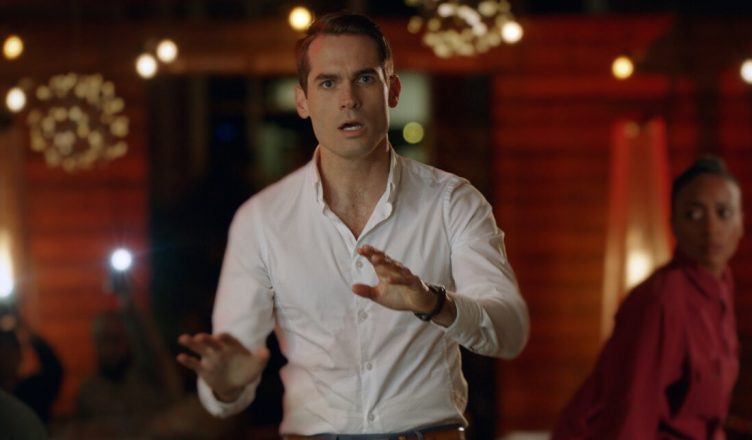 “The Beta Test” is both a slick satire and a confusing and muddled thriller. Writer/director/actor Jim Cummings  (“Thunder Road,” “The Wolf of Snow Hollow”) plays the lead, Jordan Hine, and he makes Christian Bale’s slick Patrick Bateman of “American Psycho” seem chill. In a film that has great snarky dialogue, this line describing Jordan Hines stood out: “I’m someone who just cannot give a shit.”

Jordan and best buddy P.J. (co-star and co-director P.J. McCabe) portray Hollywood agents, and that says it all. Insincere. Phoney. Self-serving. Dishonest. All apply. The two do a great job laying out their concerns about a time in Hollywood when agents may be a dying breed and the career template is shifting under their feet like the San Andreas Fault. (“You are a dying social network, and everyone can’t wait for it to fall apart.”)

Lots of references to the WGA (Writers Guild Association), which has been locked in a contentious series of negotiations and lawsuits regarding agents giving writers the short end of the stick, so to speak, when representing conflicting interests and “packaging” them to studios. The recent strike that was averted may be a step in the right direction for Hollywood writers. It is worth noting that 7,000 of them fired their agents in a show of support for their legal team’s efforts.

The opening scene of a gratuitously violent murder gets our attention, but is only tangentially related to the rest of the plot.

Jordan Hine (Jim Cummings) is about to be married to Caroline (Virginia Newcomb), whose only task in life seems to be to plan the upcoming wedding. The fact that the two real-life buddies (P.J. McCabe and Jim Cummings), dreamed up this slick confection without much concern for getting a realistic woman’s point-of-view is illustrated by Caroline’s part. (Made me glad that Daniel Craig insisted they bring Phoebe Waller-Bridge in to help write “No Time to Die.”)

Jordan receives a mysterious purple envelope with an invitation to a no-strings-attached last sexual fling in a fancy downtown hotel. Given his moral failings, he gives in to temptation.

Later, there will be hell to pay for this act of infidelity. And the payback isn’t confined to just Jordan.

The plot begins to become unwieldy and to unravel, as sex, blackmail, algorithms, and the Internet become increasingly involved.

It’s still a very well-done and beautifully photographed black comedy until the task of tying up the plot becomes imminent. Watch it for yourself to find out what happens.