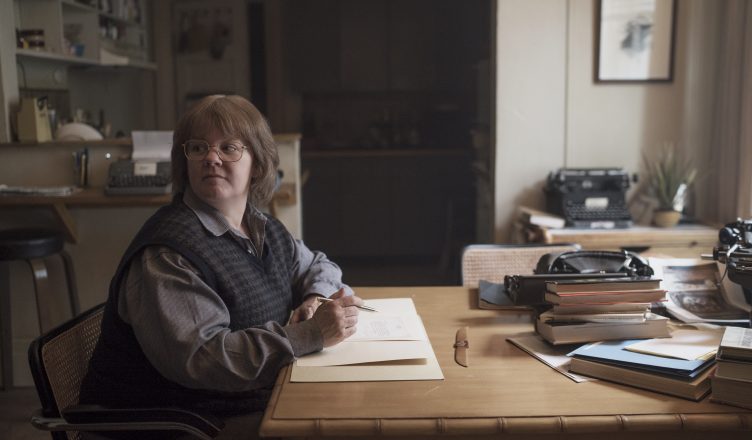 Hidden behind a grey wig and dowdy clothes, her unadorned face in a perpetual frown, Melissa McCarthy has the role of her career as celebrity literary forger Lee Israel in Can You Ever Forgive Me? Directed by Marielle Heller (Diary of a Teenage Girl) and written by Nicole Holofcener and Jeff Whitty, Can You Ever Forgive Me?, based on Israel’s memoir of the same name, takes McCarthy deep into emotional and dramatic territory in a way fans of her comedies (“Bridesmaids” “Ghostbusters”) have never seen her before.

Lee Israel may be one of the most fascinating real-life characters you’ve never heard of to grace the big screen. Early in her career she had a fair amount of success writing biographies of dead literary giants like Dorothy Parker and Noel Coward. When tell-all books came into style, her career tanked and in desperation she turned to forging and then stealing letters of famous dead writers to keep her afloat and to pay the vet bill for her beloved cat, her only companion. Eventually she was joined in her scam by Jack Hock (Richard E. Grant), gay like Israel, but unlike her charming and likable so he was the ideal person to pass off her fake letters to willing booksellers who then ratcheted up their price to gullible buyers.

Israel, who died in 2014, was cranky, usually half-soused and misanthropic. What makes McCarthy’s performance so fabulous is that despite Israel’s downer qualities, she brings the writer to life and makes her the most witty and interesting person in the room. There is not a moment when you don’t root for her to turn her life around and evade the FBI agents closing in. McCarthy is so good — in an Oscar-worthy performance — that she’s recreated Israel like a three-dimensional hologram.

Last weekend McCarthy was in Manhattan to promote her new movie to journalists who circled her at roundtables at the Whitby Hotel on 56th Street. “This is like a good wedding table, though it seems rowdy,” she cracked.

In real-life McCarthy is the polar opposite of Israel of course. She’s cheerful, sweet, her eyes and mouth in a perpetual O of good cheer. Richard E. Grant said of his co-star, “More than anything, Melissa gains friends on every job she does which, of course, is very annoying because she’s as friendly with Jude Law as she is with me and everybody else she’s worked with.”

Soon McCarthy had journalists enamored. She recounted how she left her parent’s corn and soy farm in Plainfield, Illinois when she was 20, arriving at LaGuardia with only a suitcase and $35.

“Which was not the smartest move,” she said. “I mean, thank God it was based on no good thinking, or I never would have  done it,” she laughed. “I just showed up and I thought, this should be easy. Then I was like, ‘What am I doing? Oh, my God! I have no money.’ Soon I was sharing a bagel a day with somebody,” she laughed.

“I don’t even know what I thought being an actress was. I don’t know exactly what I thought I was going to do. I didn’t even quite have a thing to conjure. I know when I came to New York, I didn’t know how to do the business side of it.” So she focused on the work. “I just studied, and I did plays. And I studied, and I did plays. It didn’t help me survive any better, but I think it was good for learning.”

She was excited when she finally met with a manager although not so much about the advice the agent gave. “I met with her in her studio apartment. Then she was like, ‘You’re never gonna work. I do remember her saying, you’re never gonna work. You have to lose weight. But the point of that was, I think I was like a (size) six. I was like a little thing. And somehow in me I was just like, well, that seems crazy. That seems nuts.”

Then she took stock of where she was receiving this advice. “I was like, ‘I think you’re working out of your studio. Maybe you’re not the most business savvy either.’ I don’t know where that came from. Now at 48, I was like, I’m so glad I said it. It was probably a fluke. But I remember just being in there and being like, I’m not gonna come back and sit in your bedroom to talk about why I’m not gonna work.”

It’s a long way from Illinois to playing a literary forger. Asked whether Israel is less like her than any other character she’s played, the actress noted that there was a similarity between Israel and Michelle Darnell (“The Boss”). “It’s fist forward for her. Shove first before you’re shoved.”

But what fascinated her about Lee Israel was her inward quality and that it was “fascinating to play.” It was also the writer’s demeanor and quietness that attracted her to the role.

“Instead of always verbally responding, to know that Lee would probably just sit and watch and wait, probably hopefully for the person to leave. As opposed to, because certainly verbally she could have always come up with a line and a quip, and often did. But it was interesting to change that pacing and timing, and just direct it inwards, and wait someone out.”

Coming up with Lee Israel’s look was an organic process. “It’s almost like it’s a bit of Tetris…. One of my favorite things was when things didn’t fit right. I was like, leave it. Like It shouldn’t fit, it’s 15 years old. She’s probably not the exact same shape, size, from age, from whatever it is. I did love that. Because you don’t get that in a movie very often, where you let the bad fit kind of ride.”

It was important to also find Israel’s gait, how she walked. She came to see the way Israel dressed as protective. “It was like a cashmere and tweed armor. But once it got on, I felt the weight of her. And things were heavy, and we had things of a certain weight on me at all times. I just thought she literally feels weighted.”

To a question about whether she knew who Israel was before doing the movie, McCarthy said she didn’t.  “And it bothered me that I didn’t. I felt like I should have. First of all, it’s a fascinating story. It’s not even the area that you’d expect a crime to happen. You don’t expect that type of person to end up with the FBI. And it’s not like she’s smuggling drugs, it is for literary forgeries. I know Israel committed a crime. She’s grifting people for sure.”

But she found Israel and playing her irresistible. “I think especially now, I loved how she did not require anyone to tell her what she was. I love that Lee just didn’t need it. She was gonna be who she was gonna be, even when it made it much more difficult for her. I find that a really attractive quality. Even when it’s slightly unpleasant, I still admire it.”