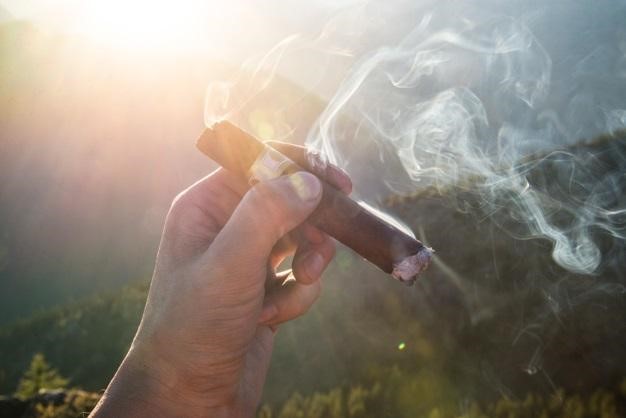 Associated with power, sophistication and status, cigars on-screen help us to understand the characters a little better while adding a hint of drama to each scene. We take a look at some must-see movies that feature an incredible scene where the main character lights up and enjoys the delicious taste of a quality stogie!

Featuring one of the best cigar scenes in cinematic history, Independence Day, featuring Will Smith and Jeff Goldblum, sees the pair trying to save the Earth from an alien attack. Near the end of the film, cigar-lover Captain Steve Hiller (Smith), offers David (Goldblum) a cigar stating ‘This is our victory dance… not till the fat lady sings. This is important’. Once on board the alien mothership, the duo light up and enjoy a stogie in space!

One of the most iconic cigar smoking scenes ever made occurs in Clint Eastwood’s spaghetti Western, The Good, The Bad and The Ugly. His mysterious character, ‘The Man With No Name’, was made even more intriguing by the skinny cigar that was spotted between his lips throughout the film, especially during the infamous ‘Mexican Standoff’. This scene is incredibly tense, and perhaps the most iconic scene of the whole trilogy, as he stands off against his opponents. Keeping the cigar firmly between his lips as they closely watch each other, it doesn’t even drop when he shoots the film’s antagonist, Angel Eyes.

Wolverine is almost as renowned for his cigar-smoking habits than for his retractable titanium claws; especially when real life cigar aficionado Hugh Jackman is playing the part! With a love for Cohiba cigars, Wolverine is often seen with a cigar in hand. One of the best moments in the movie is when he is stood atop a vehicle, surrounded by his enemies, and uses his claw to slash open the gas tank, creating a massive fiery explosion. Unscathed by the flames, Wolverine stands with his cigar in mouth, and it has been handily lit by the explosion!

Cementing Pacino as a Hollywood legend, Scarface saw him transformed into Tony Montana, a Cuban refugee turned drug kingpin, with a penchant for the finer things in life. Not straying too far from his Cuban roots, Tony loves a cigar and is seen puffing away on a fair few throughout the film.

See him smoking a cigar in this scene:

This sci-fi/action classic sees Arnold Schwarzenegger as Vietnam veteran Dutch facing off against an alien threat. Despite the constant danger of being hunted down by a mysterious otherworldly enemy, Dutch lights up a stogie and saves the world in style! As a massive fan of cigars in real life, we’re sure Arnie loved this role!

Watch him light up a cigar here:

The last film to feature James Bond smoking anything, Die Another Day sees 007 paying a visit to a Cuban cigar factory, where he takes a moment to enjoy a quality smoke. On his arrival at the factory, he requests a ‘Delectados’, which was not a type of cigar, but rather a code name for the sleeper agent he was there to find! After the film’s release in 2002, cigar companies began to produce a stogie known as the Delectado in response to demand from the film’s cigar-loving fans!

Are there any smoking moments from movies we have forgotten? Why not let us know in the comments or via our social media channels!