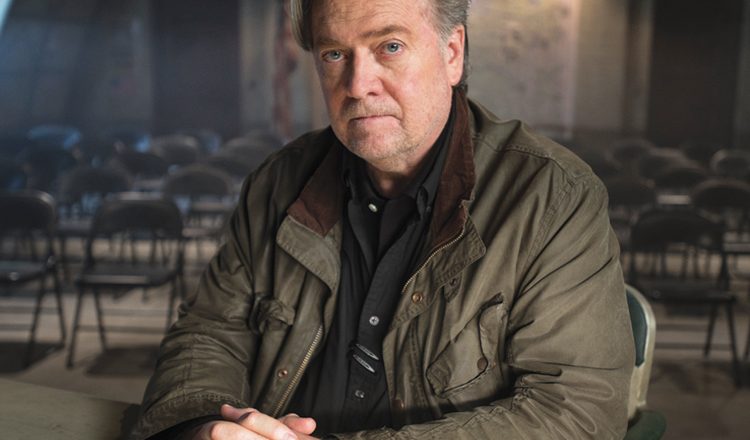 Errol Morris, one of the world’s foremost documentary filmmakers (“The Fog of War,” “The Unknown Known”), presents us with his latest film, American Dharma, a sobering peek into the mind of the man “Time” magazine dubbed the Master Manipulator, Steve Bannon.

Dharma means “duty, fate and destiny,” according to this past and present Trump advisor.  Before American Dharma screened, the Chicago Cinema documentary chief (Anthony Kaufman) read a brief note from the filmmaker which said, “Who would have thought that Henry King, David Lean, John Ford, Stanley Kubrick, Michael Ritchie and Orson Welles would offer such fertile ground for Fascism.  This is my most despairing and horrifying movie.” Morris was referencing Bannon’s frequent allusions to films he has seen which have spoken to him, none mentioned more frequently than “12 O’Clock High” starring Gregory Peck, directed by Henry King.

There is little doubt that Bannon (assisted by Reince Priebus and Kellyanne Conway), entering the Trump campaign at the eleventh hour with the financial backing of Rebekkah Mercer and family, saved Trump’s campaign. Bannon brought with him a game plan and what he refers to in the film as the Honey Badger spirit of never giving up. Bannon brought a first-rate mind and education (Harvard Business School, among others) to the battle, albeit a reputation for being “a stone-cold racist” and someone who is “doubling down on fear.” As Bannon says onscreen, “You need to be a blunt force instrument.”   He adds, “We just did it and now we’re gonna’ march on the Capitol.  We’re gonna’ drop the hammer.”

Bannon, who was Executive Chairman of Breitbart News under Andrew Breitbart said, “The medium is the message and he (Trump) understood that.”  Bannon described 15 to 18% of the voting public as people who didn’t like either candidate offered them in the presidential race, and notes that two-thirds of those people opted to vote for Trump over Hillary Clinton.

Bannon—who has been taking his show on the road covering the European circuit since his dismissal by Trump after Charlottesville, reminds the interviewer that “We had Brexit as the canary in the mineshaft.” Says Bannon, as campaign guru he felt the Trump campaign needed to convince the American voting public of 3 things:

Referencing a cautionary speech by Hillary Clinton in her campaign, known as the “alt right” speech, in which Hillary warned of the dangers inherent in a Trump presidency, Bannon crows, “That’s when I knew we had her. They’d walked right into the trip. If they (the voters) see you as the instrument to get their country and their jobs back, they’ll vote for you.” His point: Hillary did not represent the change that the states of West Virginia and most of the Midwest wanted to see.

Citing quotes like “When the legend becomes more powerful than the truth, print the legend,” and “Evil is powerless if the good are unafraid,” Bannon pulls from Errol Morris an admission that Morris voter for Clinton “because I was afraid of you guys.  I still am.  I did it out of fear.”

Another favorite Bannon quote from Milton’s “Paradise Lost” is, “I’d rather reign in Hell than serve in heaven.”

Morris asks Bannon if he’s all abut destroying everything and Bannon basically acknowledged that he is, saying, “We have to clean out some of the underbrush” and “A complete rejection of the system is due,” which he predicts will come after another financial crisis and will be “like a scythe through grass. It is coming.”

In addition to warning us all exactly how this administration thinks, the solemn, depressing, insistent music, courtesy of Paul Leonard-Morgan, adds immensely to the tone and impact of American Dharma. The cinematography by Igor Martinovic, who frequently poses Bannon in profile against the horizon, is good. Setting fire to the hangar (Quonset hut?) where the interview takes place is both a great metaphor for Steve Bannon’s philosophy of “the Fourth Turning” and makes for great visual imagery.

Is there anything more depressing than listening to someone this close to power telilng us, “Revolution is coming. It will come, as night follows day?” Aside from Steve Miller’s “American Carnage” speech, [which George W. Bush on Inauguration Day declared was “Some weird shit”], how uplifting is it to hear Steve Bannon tell say, “I’m saying if we don’t make changes we’re going to have an Apocalypse.”

Recommended, but have something uplifting awaiting you when you finish watching this important 95 minute documentary from the master.