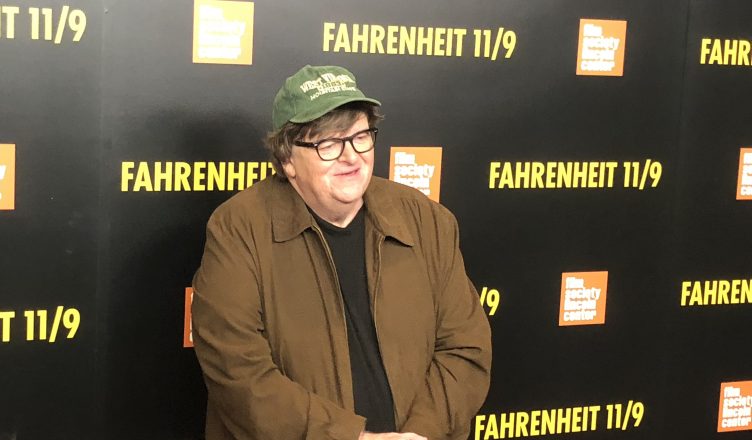 “Nothing Trump says should be believed,” Moore told reporters on the red carpet. “He’s always lying, and he’s always telling the truth. The man’s an evil genius, and he was able to outsmart the smartest person who ran for president.”

As for whether Trump can get redeem himself and do anything to turn things around, Moore told reporters. “He needs to leave. He needs to resign. He needs to go away.”

Even though “Fahrenheit 9/11” was the most successful documentary ever made, earning $119 million at the box office, it still failed to prevent Bush’s re-election. So how much influence do movies have over people I asked the populist filmmaker?

“Movies definitely make a difference,” Moore told me. “They’ve made a difference all my life. They made a difference since I saw ‘To Kill a Mockingbird’ as a child. Movies  always made a difference for me and I think they do with people. There’s something about it. I’m sure psychologists have studied it, when the lights go down and the curtain goes up and somehow you leave the reality you’re in and you find yourself in the reality that the story is presenting you on the screen.”

As for whether movies can change and get people to do the right thing, he told me, “Can inspire them, can give them some optimism, can sometimes show them a way out. I hope that’s what Im doing in this film tonight, helping show people a way out of the madness that we’re in.”

No one’s off the hook when it comes to blame for Donald Trump’s ascendancy to the presidency Moore says in the documentary. At its most controversial,  Moore compares Trump’s election to Hitler’s rise to power in 1930’s Germany.

In a 25-minute talk following the screening, which was both a blistery attack on Trump  and a rallying call for change, Moore poured some of the blame on New Yorkers:

“First time I saw Trump was when I came to New York in 1990 was at aa Planned Parenthood Benefit. C’mon, there’s gotta be people in this room who knew him, you were in the same room with him, he was everywhere, all the time, at Democratic Party things… Don’t look down like you don’t know what I’m talking about. You gave the world Donald Trump. New York City had 40 years to stop this guy. What happened? I can promise you that if he was from Detroit or flint, you never would have heard of him. We would have taken care of him. But Here he became entertainment. He was a joke. The media, the media, not you, not the citizens, the media came up with their nickname for him, the Donald, an affectionate nickname, and no matter what he did, all the crazy stuff he did, all the trouble he’d get into it, oh it’s the Donald and nobody took him seriously for 40 freaking years,” said Moore.

“He’s one of the greatest performance artists I’ve ever seen, and he pulled it off and he outsmarted everybody. And he’s going to do it again. And if we don’t accept that he’s going to do it again, he will do it again. The only way to make sure he doesn’t do it again, is for us to understand that he has the power to do that and to get up every morning and  as I go around the country now in the next couple of weeks, my main thing to everybody is, every American, with the exception of a few people living in the wide reaches of Montana or Texas, every one of you lives within a three to four hour drive from a swing district and there’s absolutely no excuse for anybody right now to not look at the calendar of October and say, I’m going to give at least one weekend where we’re going to go some place, whether it’s some part of New Jersey, whether it’s Reno, whether its the central valley of California, wherever it is, where there are these swing districts, to go there — there’s a couple in Michigan — come stay with me, I live in one of them, and do what needs to be done. If you don’t do that right now, I’m not messing around when I say this,  I don’t want to listen to you complain about Trump for the next two years.”

At the after party at Tavern on the Green, amid the garlands of glittery lights in the festive outdoor space, Moore gave a 14-minute impromptu speech preceded by a shout out to legendary documentary film makers Barbara Kopple, D.A. Pennebaker and Chris Hegedus.

Then Moore recounted how a two-hour conversation with Steve Bannon “changed the course of the film” after he  asked the former White House strategist how they pulled off the election.

Moore said it’s time to stop being a bunch of whiny liberals. “Everybody has gotta start standing up and fighting and by any means necessary. We’ve gotta get out there in these next 54 days” for the midterm elections.

Moore was still celebrating with guests at 1 am when I left the party.  “Fahrenheit 11/9” will open September 21 in a record number  1800 theaters.