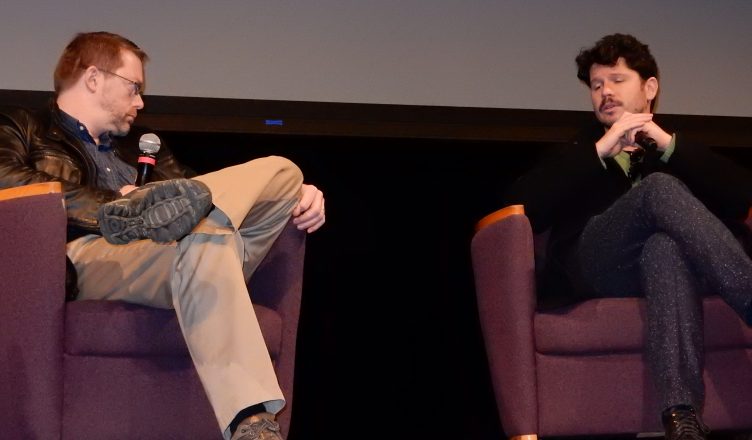 I recently attended the Oakton Community College Pop-Up Film Festival. The festival is organized by Film Instructor and Director Michael G. Smith in Des Plaines, Illinois. Porto is a film featuring one of Anton Yelchin’s final film performances, and was shown with Writer/Director Gabe Klinger in attendance for a Q&A afterwards.

Gabe Klinger flew in from New York to answer questions from the crowd, which contains one of Anton Yelchin’s very last performances. Having just seen Yelchin in the very enjoyable “Thoroughbreds” (in a small part as a drug dealer), here was a chance to see Yelchin take center stage as the male lead in this story of romance remembered.

I was warned, going in, that it would be “intense.”

Normally, I would simply describe the plot and give the “bad” and “good” of it but after reading the harsh and somewhat inaccurate review in the November 27th “New Yorker” magazine, I’ll be doing a bit of quoting and rebuttal.

Line two of the “New Yorker” review: “Yelchin’s character, Jake Kleeman, is an American scholar in Portugal who begins a relationshp with Mati Vargnier (Lucie Lucas), a French archaeologist who followed her professor (Paulo Calatre) there from Paris.” The character Yelchin plays is not accurately described as “an American scholar.” Jake explains that he and his sister were dragged around the globe by their American soldier father and, after enjoying their time in Portugal more than most of their father’s previous nomadic military postings, they decided to “leave the tour” at that point and quit relocating to a variety of cities. Actually, he says his sister made the decision to stay in Portugal, which they both liked, and he stayed in support of Sis’ decision. Jake is long past the “student” stage when the film opens, looking as if he is at least thirty, and, in fact, admits that he will take any job to keep body-and-soul together. We see him with a wheelbarrow, hauling rocks and stones in a quarry. We see him helping the gorgeous Matie (Lucie Lucas) haul boxes to her new apartment. He appears to be pretty down-and-out. You soon get the impression that Jake is closer to bum status than to “scholar,” although he does mention having once been a “scholar.”

Either I watched a different film, or whoever wrote that description for the New Yorker was paying more attention to the character’s talking about his early days when he was able to attend colleges overseas.

The next New Yorker observation is this: “The director, Gabe Klinger, plants Mati and Jake in lavishly photographed cityscapes but burdens them with a drama that plays like a lonely man’s wet dream.”

REBUTTAL: I would agree that the cityscapes are lavishly photographed. I would not agree that the leads are “burdened” with the remembered romantic tryst that plays out more than once.

The New Yorker: “The script (which Klinger co-wrote with Larry Gross) is a hollow batch of cliches, starting with Mati’s hot come-on in a recurring cafe sequence in which Jake glowers and leers carnivorously at her before they grunt and heave gamely in a long bedroom sequence (an icky fantasy of phallic expertise.)”

REBUTTAL: Where to start with this one? What I saw was a Mona Lisa-like gorgeous creature (Lucie Lucas) who would rival Sophia Loren or Ava Gardner in their primes, sitting in a picturesque cafe where Jake (Anton Yelchin) is mesmerized by her beauty. Yes, he stares at the beautiful brunette with the Mona Lisa smile, as any red-blooded heterosexual man would. Ultimately, Jake works up the courage to approach Mati and ask if he may join her at her table. He does and they remain there briefly before Mati asks Jake to assist her in moving many boxes from her car to her apartment.

He agrees and we see him hauling box after box from her car to Mati’s new place, followed by her unrolling the primitive “bed” on the floor, which the couple soon puts to good use. Mati tells Jake that she is involved with her Professor right from the start, but that does not stop the smitten lad. The graphic sex scene (replayed from memory more than once) displays all of Luci Lucas’ charms in full frontal shots that prove that she is truly gorgeous. Unfortunately, we see only Yelchin’s back and his receding David Letterman-like hairline, neither one of which is particularly attractive.

In the morning, Jake (Yelchin) awakens alone in the bed on the floor. He begins assembling one of Mati’s bookcases and arranging some of her belongings on it, when Mati and her amorous mature Professor lover return to the scene of the romantic crime. It is obvious that the older man very quickly sizes up the situation, but he does not seem particularly angry or aggressive. (He goes to the refrigerator, in fact, and changes the subject). He’s French, after all.

Later, we see this romantic scene played out more than once. The bad thing about the repetition of the scene is not the nudity or the sex, but the fact that the scene is badly out of focus in the replay. It really bothered me to see the fuzzy, blurry images.

It was only after the film was over, during the Q&A with director Gabe Klinger, that the audience is clued in that the fuzziness and out-of-focus images were intentional, meant to show that memories, too, can shift in and out of focus with the passage of time. Unless this is run as a disclaimer at the start of the film if I were cinematographer Wyatt Garfield, I would have advised against this ploy to show that memories can (also) be fuzzy. It’s just incredibly amateurish-looking, as though my dad shot this film—-the guy who always cut the heads off all of his subjects.

The New Yorker:   “What’s more, Klinger plays coyly with the time scheme, as if to mask the lack of substance with tricks of form.”

REBUTTAL: I’m not sure that the playing around with time and shifting of time was “coy,” but it did have the effect of being slightly confusing. However, when we see Lucie with a small child and her obviously-now-ex older husband enters to leave his daughter a gift, it is pretty obvious that Mati followed through with her intention to marry the better choice between the two. Time has passed—and a lot of it. Mati has married, given birth, and become estranged from the Professor. As for Jake, he was always just a one night stand, although he had a much more romantic view of their encounter and seems incapable of moving on.

The New Yorker:   “A gratuitously ugly scene of Jake’s physical abuse of Matti is a casually checked-off plot point.”

REBUTTAL: The only “physical abuse” I observed took place in the street in public when the frustrated Jake tries to physically restrain the gorgeous Mati by grabbing her arm. She rebuffs him and runs away. It was more of a glancing blow to her arm in his attempt to keep the beautiful creature from leaving him. But, quite frankly, he has no job and no prospects of a job and she was quite honest during their one-night stand about her intentions, so the fact that she doesn’t plan to continue screwing the unemployed (and not that attractive) admirer doesn’t seem to be much of a shock to anyone but Jake.

The New Yorker:   “With Francoise Lebrun, in the movie’s one well-imagined scene , as Mati’s mother.”

In the scene the New Yorker apparently liked, Mati asks her now old and weathered mother if she still desires men in her life. Mom answers that she does, in a rather world-weary manner, and even offers up her last sexual encounter with a stranger for her daughter’s consideration. So, you’re never too old might be the right way to sum that bit of wisdom up, which is comforting.

I enjoyed the movie and the Q&A afterwards. It is dedicated to Anton Yelchin.

(See more reviews and observations by Connie Wilson at WeeklyWilson.com).