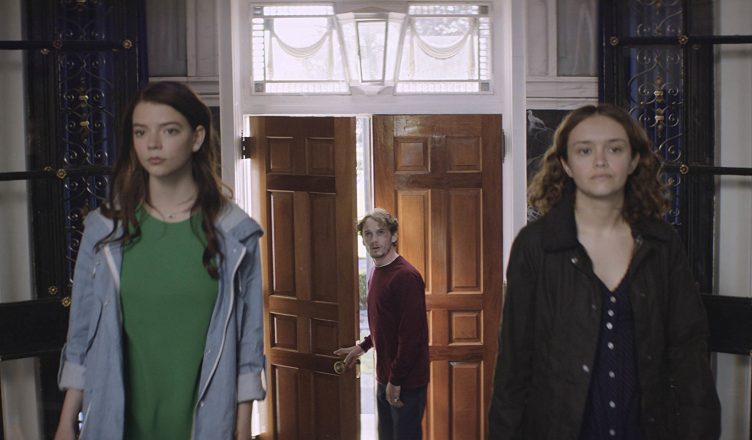 Thoroughbreds written and directed by Corey Finley, was a Sundance sensation and it was my favorite film on Sunday, October 15th at the Chicago International Film Festival.
(Thoroughbreds does not officially open until March).

The script for Thoroughbreds is very funny in a wry, darkly comic way, even though, as its synopsis says, it follows two teenagers in suburban Connecticut who rekindle their childhood friendship, learning that neither is what she seems and that a murder might solve both of their problems.

“Snappily written and cleverly plotted, this Hitchcockian film is a superbly crafted and highly unpredictable thriller,” say the program notes. The Director/Writer, who was present (Corey Finley) explained that Thoroughbreds was originally a stage play, but that, while similar to the stage play, the scenes onscreen were one-half the length of those in the theater.

The lead part of Lily was played by Anya Taylor-Joy (“The Witch”) and the friend with anhedonia and other disorders (a psychological condition characterized by inability to experience pleasure in normally pleasurable acts), Amanda, was Olivia Cooke. Director  Corey Finley said of the choice of Olivia Cooke for the role of the emotionally stunted girl, “In a lot of her movies, Olivia was deadpan. She has incredible comic timing, too.” Of Anya Taylor-Joy he commented, I knew from “The Witch” that Anya could handle such a wide range of intense emotions.”

The cast also included Anton Yelchin and was dedicated to him. Yelchin played Tim Jones, a drug dealer, who may (or may not) be the source of a weapon the two girls want to use to kill someone.

One of the best things about Thoroughbreds , besides the darkly comic writing and the performances was the music by Erik Friedlander, a classical cellist.  The director wanted a visual language that was beautiful, glamorous and visually lively and Finley wanted the score to play versus percussive/atonal aspects.

I also liked the way the violence occurs offscreen. There are no gut-wrenching scenes of knives being thrust into mid-sections as in this season’s television series “American Horror Story.” The violence occurs, and we know it has occurred, but it happens in a creative offscreen way, a la Hitchcock.

Lily (Taylor-Joy) is initially seen coaching her childhood friend Amanda for a college entrance exam (at Amanda’s mother’s urging). Amanda tells Lily that she really wants to “skip college and Steve Jobs my way through life.” Amanda also shares that, “I don’t have any feelings ever.” She has been diagnosed with borderline depression and/or disassociative personality disorder.

It was because of Amanda’s inability to truly “feel” that she was able to put her favorite thoroughbred horse down, in a way that struck others as gruesome, after the thoroughbred broke its leg. Says Amanda to her horrified friend, “I just put my head down and looked at it as completing a task.” Lily later says, to Amanda, “Empathy isn’t your strong suit,” which seems an understatement. Another observation by Lily (to Amanda) is, “You’re incredibly offputting and you freak me out.”

A friend viewing Thoroughbreds  with me (a graduate of AFI who has scripted several films) felt that Anton Yelchin’s role was gratuitous and the first “wrong note” in an otherwise outstanding script. Finley did confide that Anton was on set for only 4 days. While there, he was “the nicest, most generous guy” and did a great deal of improvising. (Olivia Cooke, who played Amanda, said of him, after one day’s work together, “He’s really, really good.”)

Yes. He was. Audiences will remember Anton from “Star Trek: Beyond” where he played Chekov.  I remember him vividly from the low budget horror flick “Green Room” where he played Pat. His tragic death on June 19, 2016, in a freak accident involving a Jeep, cut short a very bright career. (Two more films come out in 2017 that will feature Yeltsin.)

The objection my friend made was this: Tim suddenly appears at a party of wealthy preppies and his entire history of incarceration for statutory rape is laid out for the assembled party-goers, whom he has approached, ostensibly to sell drugs to them.

Tim was not a young man who would have been invited to the house party, as he works in a nursing home and is obviously not one of the Golden Entitled types who have assembled. The question did occur to both of us: Was Yeltsin included primarily because he was the Big Name within the cast at the time?

Another observation had to do with how few scenes are shot anywhere except indoors, which is often the case with stage plays that are adapted for the screen.

Verdict: Regardless of those few reservations, you’ll want to see this one when it comes out in March. The writing, alone, was worth the wait and the lavish Connecticut sets (“Connecticut felt interesting and  I knew it shouldn’t be set in a city,” said Finley, the St. Louis-born Writer/Director.) gave us all a sense of how the other half lives.