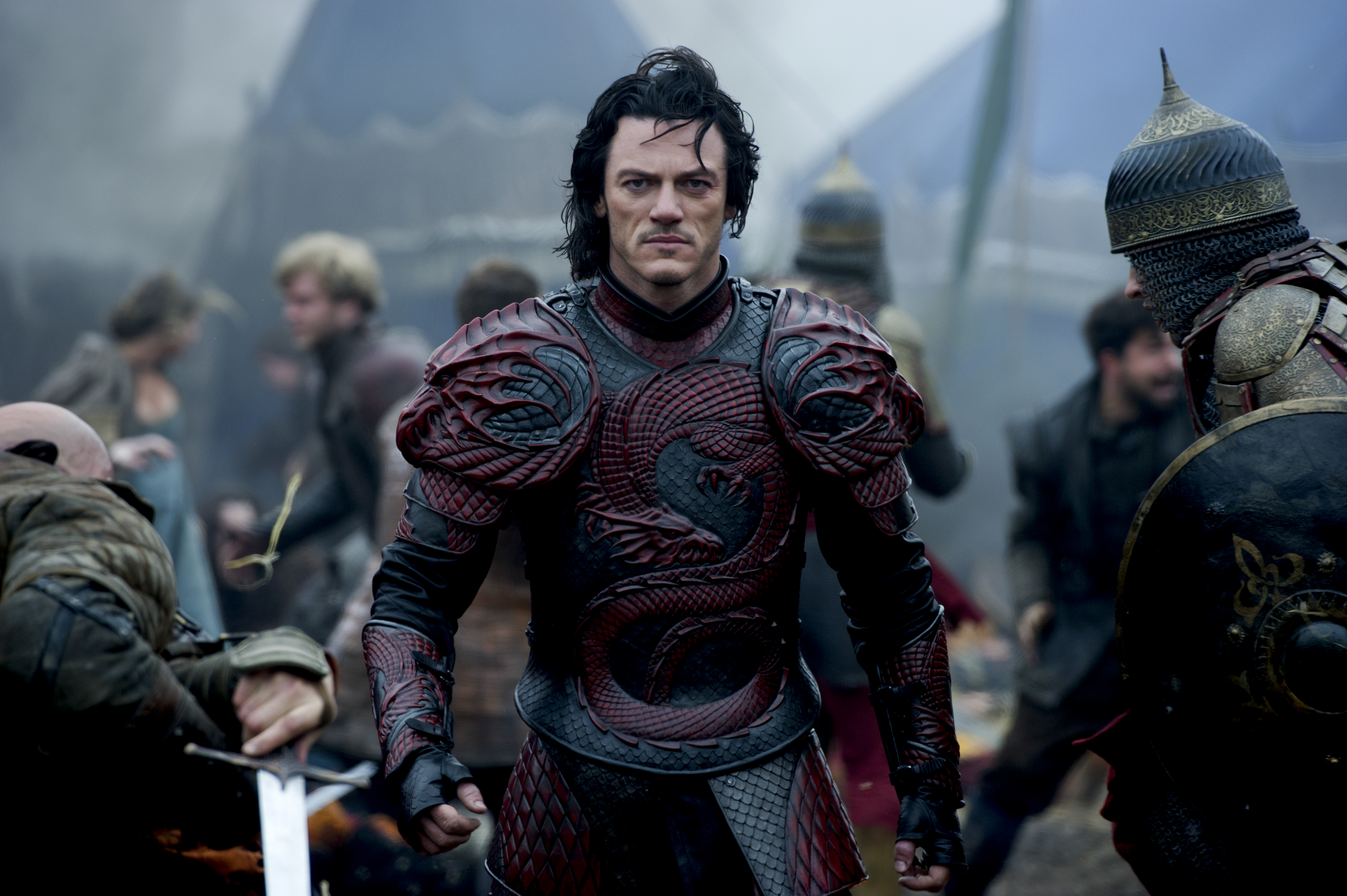 Almost an entire century after the world’s first cinematic introduction to Draculaplaced audiences under his haunting spell, the studio that pioneered the genre reawakens one of legend’s most captivating figures in an action-adventure that heralds a pulse-pounding rebirth of the age of monsters.

Luke Evans (Fast & Furious 6, The Hobbit series) transforms from the cursed man history knows as Vlad the Impaler to an all-powerful creature of the night in Universal Pictures’ Dracula Untold, the origin story of the alluring immortal we have come to fear as the sun sets: Dracula.

We all have heard of the traditional story of Dracula and we all kind of have a sense of what they generally portray him as. He is the guy in the black cape with pointy ears and pale skin. One of the most popular images that come to mind is Bela Lugosi’s portrayal of this vampire in 1931’s Dracula. That was before of course during the “Pre-twilight” era when America wasn’t obsessed with making vampires into sex symbols. Soon certain writers told us audiences that “Oh no, they don’t burn in the sun anymore, instead they sparkle. Dracula Untold in short mixed business with pleasure. In other words, they cast Luke Evans to not only as a “sexy vampire” but also your worst nightmare. In the beginning the film made it a point to let the audience know that this isn’t your regular vampire story. The Dracula story you have come to known is false. This is how it really happens and This is what you will know. The post battle scene amongst the Turkish Empire in the introduction came on dark and desolate with the dull lighting and lack of color to give off that particular vibe. Even though it started off a little cliche with introducing this “untold” story and its narrative, I thought it well done in the fact that It got to the point. It wasn’t too drawn out but at the same time, I could have used maybe 5 more minutes of explanation of why they were fighting. In another sense it was explained soon after so I was not too disappointed. After that we quickly get to see Vlad (Luke Evans), whom of which we learn has a series of montage about his background, his role in the Turkish Empire how he got his renowned reputation as a Prince.

I’m a very visual person so I was expecting some flashback scenes on what exactly he did. This isn’t everyday conversation and you aren’t reading a book to where you have to use your imagination to envision what actually happened. I think Gary Shore(Director) and other writers should have implemented more flashback scenes so the audience gets a better idea of what happened. They chose to start the story in the movie’s present day where Vlad is a grown prince, which is perfectly fine but at the same time I couldn’t connect with the story or the character as much from the lack of visual representation of what happened. In other words, why the hell should I care? On the plus side, we see the character grow throughout the film in the plot. To sum the acting up, it wasn’t bad or extremely good by any means. I think the actors, especially Luke Evans (Vlad), Sarah Gadon (Mirena) and Charles Dance (Master Vampire) did well with what they had to work with in a subpar script.

The action scenes were surprisingly one of the best things in this film. They weren’t over the top gory nor too cheesy with an abundant amount of CGI effects.  It also added to the fact of showing Vlad or “Dracula” as being more of an anti hero than an all out villain. As the movie progresses we see why we should give a damn about Vlad by going into his background of fighting the Turkish war as a young boy forcefully. We see him striving to prevent the same thing happening to his son so he goes to unheard of lengths and makes a huge sacrifice to prevent that from happening. One of which having to do with his mortality as a whole. On another note, the other characters are overshadowed by Luke Evan’s character. Everyone else’s story has been left to be underdeveloped. So congratulations I now care about Vlad! Wait…why don’t I feel bad for this other woman? Even towards the end where there was a show down between Vlad and the antagonist Mehmed (Dominic Cooper), I still didn’t feel that emotional connection. These two were supposed to have been like brothers, problem is I didn’t see it but I have to just “believe” that it happened. Lack of character development and flashback scenes made me feel disconnected in the last throwdown which supposed to be a big turning point of the movie.

Overall this movie wasn’t terrible but it isn’t something I’d watch again, maybe ever. History buffs need to steer clear of this movie. If you’re able to enjoy a movie with a lack of historical facts and accuracy then by all means you will be able to watch this movie without cringing on the inside. I feel like the writers lost sight of connecting the characters to the audience. When I go to watch a movie or hear a story, I need a sense of sympathy for the characters. The important question is “Why should I care?” and they didn’t have an answer in this movie. The film had so much potential in that area to grab our attention for character development. I walked out feeling like I was missing something and it took me a good 10 minutes afterwards to figure out what it was. A majority of the characters failed to make an impression on screen with their background and I also didn’t see this supposed ‘monster’ Vlad had to become to save the empire. It all felt very sugar coated and shallow. Because of all of those mistakes, it makes the movie very mediocre with forgettable characters and a forgettable film.

4 thoughts on “Dracula Untold: Or Should It Be?”