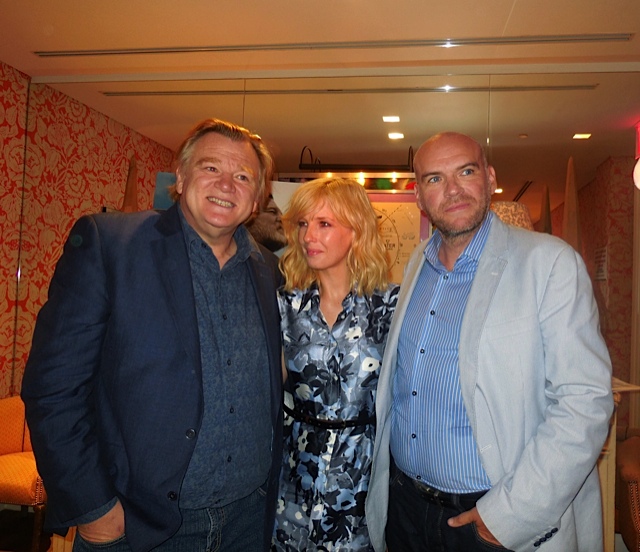 “Calvary” director John Michael McDonagh was once “incarcerated for accidentally killing a swan” according to the production notes Fox Searchlight publicists handed out at a press event for the film recently at the Crosby Hotel in SoHo.

The director’s new bleak, comedy drama, which stars Brendan Gleeson as a suffering, honorable priest, is the follow up to his 2011 film, “The Guard,” in which Gleeson played a feckless cop trying to take down drug smugglers. During his recreational hours, the cop enjoys kinky sex with call girls, which made for some hilarious, unforgettable. The movie is Ireland’s most successful indie film. “Calvary” is much darker, less forgiving, funny but sad.

The “Calvary” press notes go on to say that after McDonagh’s release he worked in “a pie shop” where he ballooned “to over 18 stone” and that currently “he’s married “disastrously,” to a “psychologically unstable Australian.” The director’s wife Elizabeth Eves is a co-producer of the film and also in the production notes, it states that despite this wacky union, they have “two lovely children,” both of whom are “suing” the director “for emotional neglect.”

McDonagh’s brother is successful playwright and writer/director Martin McDonagh (“In Bruges” and 2006 Academy Award-winning short “Six Shooter,” starring Gleeson), and the siblings seem to have the same macabre, comic gene.

No way to know about the veracity of the swan killing, but at the press McDonagh displayed his obvious pleasure in joking around so you don’t know when he’s kidding or not. What’s not in dispute is the beauty of the locale in which the film is set, Sligo on Ireland’s West Coast, where the director’s mother was brought up and where he would spend his holidays as a child. Actor Brendan Gleeson and McDonagh talked about a particular scenic location near the cliffs overlooking the ocean, which is the spot of a key scene in the film, and which is notorious for being the spot from which people threw their unwanted pets into the sea. Journalists groaned at the cruelty while actor Brendan Gleeson and McDonagh continued their banter and seemed not to notice.

On a less disturbing note, the director said his motivation for the film was “just to tell a story about a genuinely good person and not be ironic cause there’s too much irony in movies these days. I’m guilty of it myself but the intention was deliberately to get away from that.” He added there were or would be many films made about the Catholic Church scandals and he wanted something different. “Let’s make a movie about a good preacher instead of a bad one. It was a way of flipping it on its head. So that was the initial discussion and it just grew from there.” Also appearing at the press event was Kelly Reilly, (“Flight”) who plays the suicidal prone daughter of Father James (Gleeson), who was happily married before he became a priest.

“Calvary” has a wallop of an opener on which the rest of the film hinges. While he is in the dark confession box, Father James hears a man tell him he plans to murder him in seven days. The murder is retribution for years of abuse the confessor suffered at the hands of pedophile priests; the murder only has meaning the confessor says, if the victim is a “good” priest. The priest doesn’t recognize the voice and the film becomes as much a whodunit as a mediation of fate, faith and hope.

McDonagh said the film opener was his “version of a Michael Bay pre-credit sequence.”

“And it doesn’t cost as much money,” added Reilly.

“No. It’s just one actor, and some good dialogue,” McDonagh agreed. “I want to nail people to their seats and they’ll want to know what the conclusion is. When we showed it at Sundance there would still be laughs at the opening line and then people would go, ‘Oh God, it’s going to get serious,’ and then it gets funny again.”

The voice is unfamiliar to the priest and it’s meaningful that the threatened murder is to take place seven days away on a Sunday. In the week he has to settle his affairs, the priest attends to the needs of his oddball assortment of parishioners and tries to figure out who plans to murder him/her and change their mind. The terrific ensemble of actors include Domhnall Gleeson (“Harry Potter and the Deathly Hallows” and Brendan Gleeson’s son), Chris O’Dowd, Aidan Gillen (Littlefinger from “Game of Thrones”), Irish comedian Dylan Moran, M. Emmet Walsh and Cesar Award-winning actor Isaach de Bankole.)

The movie is as much a whodunit as an exploration of faith and responsibility, and someone asked McDonagh if he was concerned about balancing the humor with serious subject.

“I don’t think too much about it when I’m writing. I write fairly quickly. I like to get done with it as quickly as possible cause it’s a very boring there career sitting in a room alone with three or four hours every day.”

“You’re talking to a bunch of writers,” Gleeson reminded him.

“I like to sit down and just churn it out in the space of three weeks if I can,” McDonagh said. “I never suffer from writer’s block because I’m not going to sit there with nothing to do. I mean, you can go to the pub. You don’t have to sit in the room.”

Someone asked the director if he thought, like the priesthood, being a writer was a calling.

“I don’t think of it in that way. I just knew I could never do a 9 to 5 job and I wanted a job where you get up at half twelve in the afternoon and you didn’t have to say yes, sir to anybody, so that was why I became a writer basically.”

The movie has some terrific location images, which the director said took 25 minutes to shoot from a helicopter. “We had a great caterer and I wanted to get back from lunch,” he cracked, adding of the panoramic shots, “I didn’t’ want to make a film that felt like a parochial small Irish movie, and it just does expand the whole movie and it turns it into something mythic I think.”

Asked what it was like to work with his son, Domhnall, who plays a psychotic serial killer, Gleeson said they had worked together before, notably Martin McDonagh’s “Six Shooter’ that won an Oscar.”

“That was a low ebb in my life,” McDonagh recalled of the time in which his brother was on a roll.

“Yes I know,” Gleeson said. “That one spurred all this kind of creative genius in John.” The director recalled the day his famous brother turned up on the set, when they were shooting the opening scene in the confession box. He hadn’t read the script. “Martin turned to me and he said, ‘I thought this was supposed to be a comedy?’ Which was the way I was promoting it at the time.”

As for how his chose his cast, McDonagh explained, “I want an easy life. I like to cast actors who I think are probably quite decent people and who drink a lot and Kelly fit that really.”

“You didn’t know that,” interjected Reilly.

“I sensed something,” he replied

An amusing, inside element in the movie is the reason the director has Kelly’s character wear a green coat throughout much of the film. “I wanted Kelly to wear the green coat that she wears because I wanted to make a visual reference to Antonioni’s ‘Red Desert’ because I thought if people compared Kelly to Monica Vitti. …”

“That then they would compare me to Antonioni,” McDonagh cracked.

“That’s a lot to put on my shoulder,” Reilly said softly. “Calvary” is the second of a trilogy, which will conclude with the director’s next film, “The Lame Shall Enter First,” a title he “stole” from a Flannery O’Connor short story title he told journalists, which will also star Gleeson. “It’s going to be about a spectacularly abusive paraplegic, so Brendan will be in a wheelchair in south London going around. He hates anybody who’s able bodied so he basically hates the entirety of society, which I suppose, I guess comes from me.”

It’s also got crime elements. Gleeson’s character tries to solve a murder he thinks the police aren’t investigating properly because his friend was disabled.

As to whether he’s begun preparing for the role, before Gleeson could reply McDonagh cracked, “He’s been sitting around a lot.”

The Irish actor has prepared for this role his entire life. “I like to believe that I have fantastic reservoirs of bile that I can kind of tap into easily enough, so crashing about into things and not getting access to things should hone it beautifully.”

As for other future projects Reilly just ended the season finale premiere of the ABC drama show, “Black Box,” in which she stars as a bi-polar neurologist and Vanessa Redgrave played her mentor. Reilly said she didn’t think it would get picked up next season. “We didn’t get the ratings. It’s a difficult time to get ratings in this country,” adding there has been no official announcement.

Gleeson said he just finished the Ron Howard movie, “Heart of the Sea.”  “We fight with whales and get thrown into the sea.”

He’s particularly excited about another film he just finished, “Suffragette.“

“There’s a plethora of brilliant women actors, Meryl Streep, Carey Mulligan, Helena Bonham Carter, the whole lot,” he laughed. “It was fantastic. I was a C.I.A. guy who was spying on them. I mean, dream job.”

So far, “Calvary” ranks with “Boyhood” and “The Grand Budapest Hotel” as one of the best films of the year.