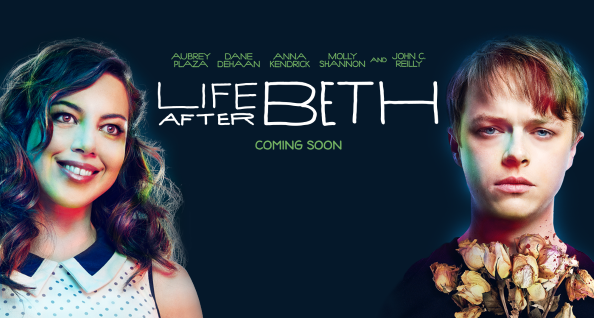 Synopsis: A young man’s recently deceased girlfriend mysteriously returns from the dead, but he slowly realizes she is not the way he remembered her.

Audrey Plaza stars in Life After Beth the zombie comedy romance (I don’t want to describe this as a rom com by any means) about a guy coming to terms with the death of his girlfriend who was bit by a snake while hiking. The opening shot of her walking staring at her phone was a clever metaphor for the comatose state of distraction from technology and how it effects relationships. The strong opening act sets up the preposterous premise of her coming back to life. She isn’t a standard zombie as she slowly transforms from life to the new Beth as the title suggests.

Like the Buffy the Vampire 1990’s TV show, horror is used as allegory to describe the relationship turmoil through the context of a sudden, monstrous transformation. The idea of a woman lashing out with spastic violent urges would be better explored from a female perspective. Life After Beth relies too heavily on the male perspective. It would have been more fascinating to showcase Beth’s point of view. Another TV show Life After Beth reminded me of was MAD TV…where repetitive, comedic moments no longer are funny and just drag on.

You can say my main issue I have with Life After Beth is a great premise not living up to its full potential of creative storytelling. I did laugh a few times but wanted those chuckles to be longer and happen more often. The cast does the best they can including a funny John C. Reilly as Beth’s father. As you can imagine with any zombie movie, the third act is gory and over-the-top. There is a witty site gag toward the end that a poster gives away. It is better in the context of the film than advertised to draw in an audience.

Writer / Director Jeff Baena will make a significant contribution to pop culture one day. I just know it. Unfortunately, Life After Beth isn’t it. His other movie I Heart Huckabees didn’t work for me even though I happened to see it the week I was introduced to existentialism in a literature course in college. In the meantime Baena, I’m rooting for you to find that success. You have it in you.