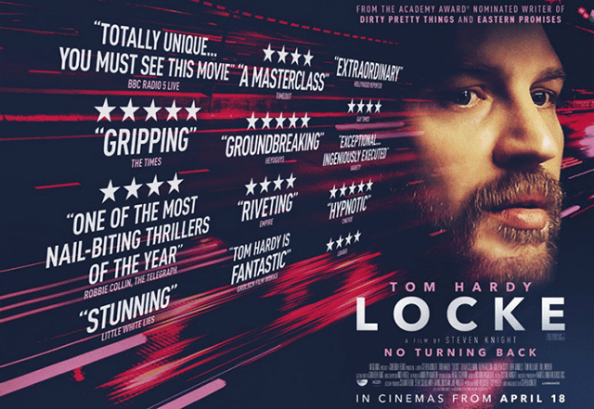 Synopsis: Ivan Locke, a dedicated family man and successful construction manager, receives a phone call on the eve of the biggest challenge of his career that sets in motion a series of events that threaten his careful cultivated existence.

It takes a talented actor and a skilled filmmaker to pull off a one man (or person) show within the context of a narrative movie. Gravity recently comes to mind as a movie that is held together mostly by a strong Sandra Bullock performance (as well as stunning technical filmmaking). Phone Booth was a flawed exercise in this type of filmmaking coming off as an entertaining gimmick. Also, the underappreciated Buried staring Ryan Reynolds trapped in a coffin featured an unexpected and terrific leading performance. That movie deserved an audience that it never received. Being the actor in a one person movie relies on a skilled performer with a wide variety of talent. From the long monologues to the climatic emotional moments, you need to keep people interested. Likewise, I hope Steven Knight’s Locke finds an audience eager for an alternative to loud, fast paced summer fare. Ivan Locke (Hardy) has worked diligently to craft the life he has envisioned, dedicating himself to the job that he loves and the family he adores. On the eve of the biggest challenge of his career, Ivan receives a phone call that sets in motion a series of events that will unravel his family, job, and soul. All taking place over the course of one absolutely riveting car ride, LOCKE is an exploration of how one decision can lead to the complete collapse of a life. Directed by acclaimed filmmaker Steven Knight (EASTERN PROMISES, DIRTY PRETTY THINGS) and driven by an unforgettable performance by Tom Hardy, LOCKE is a thrillingly unique cinematic experience of a man fighting to salvage all that is important to him.(C) a24

The strength of Locke is Tom Hardy’s stellar performance. The already talented actor shows versatile range balancing various emotions and this will lead for bigger, better, and more serious roles. Audiences become engaged with the slow paced because of the work of Tom Hardy in the driver’s seat steering the simmering, low key dramatic tension of Locke. This is a performance that commands awards discussion from the bloggers that champion. The relational isolation of commuting was on display. Though not as inventive as it thinks it is or as suspenseful as the poster claims, Locke is a mild mannered character study with dialogue driven plot that moves it along. At times it can be somewhat tedious, because American movies conditioned me to expect a bumper bash or car chase to interrupt dialogue and dramatically change the narrative. Locke is something Alfred Hitchcock would have made if he were alive. (However, it would hardly be compared to his best movies.)  Despite my minor grievances, we need more movies like what Steven Knight crafted.

Let me say that the studio A24 Films has been a breath of fresh air for indie cinema. From giving an unnerved adult voice to younger actors (Spring Breakers, Ginger & Rosa) to releasing diverse, genre movies (the teen romance Spectacular Now, the sci-fi thriller Under the Skin), they have taken needed risks in the play-it-safe atmosphere of the entertainment industry in such a short time. As the studio system has influenced a mainstream tone to indie production, A24 stays true to the old school roots. They are like a “Millennial” Miramax with a dash of Oscilloscope (the offbeat, almost underground studio) providing an additional edge in creative storytelling in the market place. A24 Films is setting a new standard for gritty and raw filmmaking that’s surprisingly still audience accessible. With Locke followed by Obvious Child, The Rover, and Life After Beth, A24 Films will have a great summer at the movies.