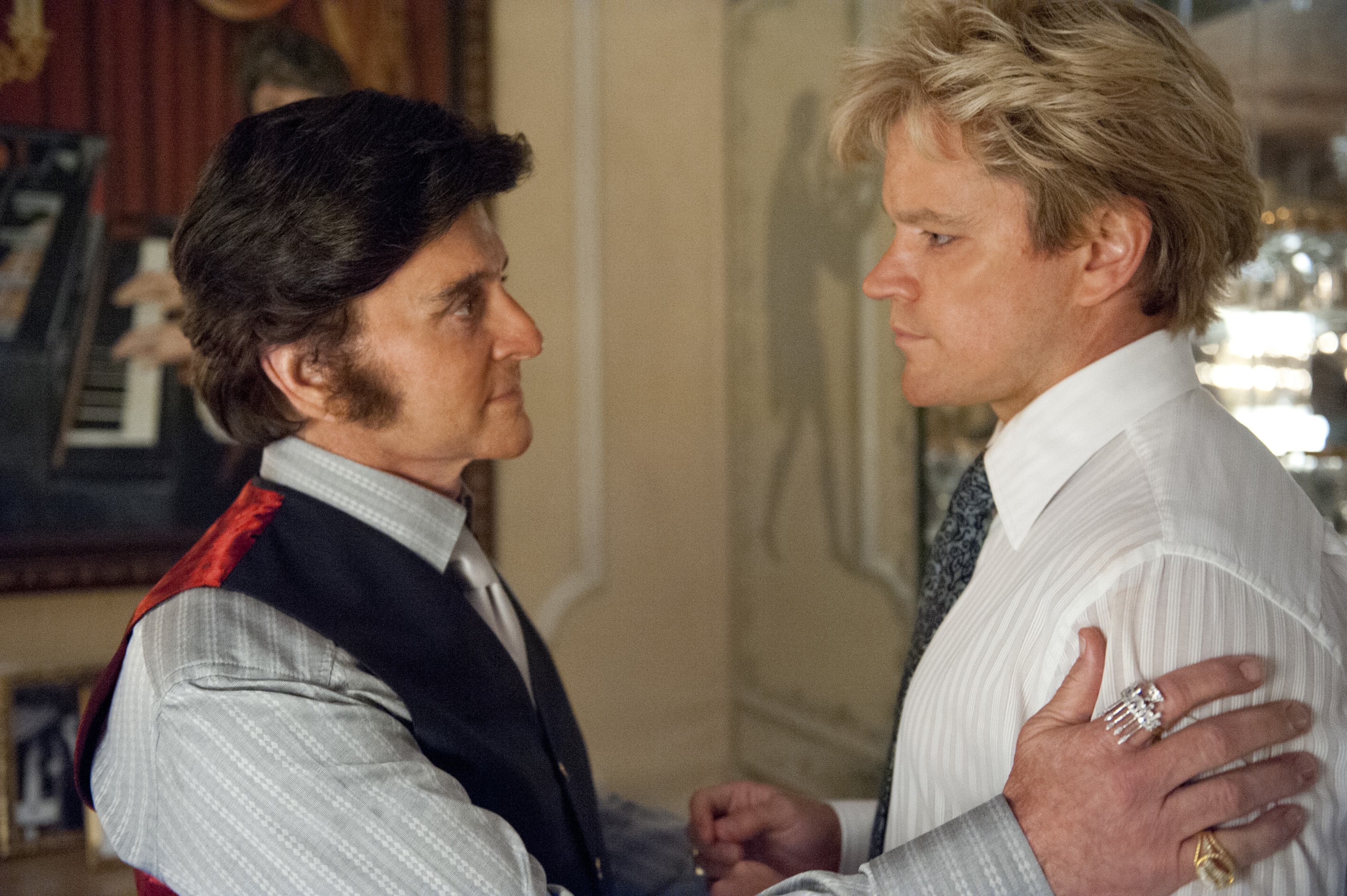 Wladziu Valentino Liberace, a musical prodigy, emerged as a concert soloist at age 11 and was performing in symphony orchestras by his teenage years. He soon become a worlwide star, known as much for his flamboyant dress and lifestyle as his records, media appearances and musical talent, up until his death in 1987. Based on the true story of Liberace’s tumultuous relationship and affair with Scott Thorson, a handsome yet drug-addicted lover, who ends up suing for palimony after their separation.

Steven Soderbergh’s Behind The Candelabra is a glamorous glitzy gift to the eyes, with a perfect infusion of hilarity and tenderness. Tongue-in-cheek flamboyance showers the movie, without overpowering the struggles and insecurities of the two lead protagonists. The audience is given insight to the rise and the fall of the strange secretive relationship between superstar Liberace and teenage vet-in-training Scott Thorson. Both men are damaged in their own right; terribly lonely and in desperate need of love and security, which they in turn provide for each other.

Liberace, played spectacularly by Michael Douglas, is camper than the village people lathered in baby oil flying on unicorns over a cloud-clad rainbow. And apparently people had no idea. Seriously, how square was 1977? We are first introduced to the piano-playing glitter God on stage in Las Vegas; where the constellation and stars have gathered by magnetic force onto his perfectly groomed locks. Douglas is so brilliantly transformed into Liberace; laced in fake tan, about 20lbs of bling, with teeth white enough for a UV dream, and costumes that could have been borrowed from the Rio carnival. Liberace’s world to the outsider is showy, colorful, exciting, successful, and fabulous. While this is true, underneath it all the audience is shown the concealed insecure, controlling, suffocating, power-hungry ‘Old Queen.’ He knows what he wants, and he gets it. Once he has lured Thorson into his weird and wonderful ways as his ‘assistant,’ Liberace makes it his mission to mould him. He wants Thorson all to himself, he gets it. He wants Thorson to have a facelift to look like a younger version of him, he does it. He wants Thorson from casual, manly cowboy to a sparkling sexpot, he changes this. I want! I want! What a brat. Douglas’ acting was wholly convincing, from his flowing mannerisms and overt hand gestures, his alluring (yet slightly creepy) eyelid flutters, and nasal elongated voice, to his complete self-comfort and confidence in the character. If this really is Douglas’ last movie, what a bang to exit on.

Complimentary to this character, Matt Damon is charming and engaging as Liberace’s toy boy, Thorson. He so delicately plays a gentle, naïve, innocent animal devotee, who under the care and manipulation of his father figure/lover progressively dons more confidence and emotional angst. Liberace, upon falling for his ‘Blonde Adonis’ states that he wants to be ‘father, brother, lover, best friend – everything’ to Thorson. CUE ALARM BELLS. However, as an emotionally wounded individual, Thorson accepts this child-like needy possessive behavior from an old letch as normal.

Their relationship starts as a warm dog-and-master type bond that in time progresses into an inseparable love before turning tumultuous amongst drugs, infidelity, sexual desires, and jealousy. As on-screen lovers, Douglas and Damon play a convincing couple, so naturally affectionate in their acting that every kiss, gesture, and word seemed so real. I was intently looking for a slip up or moment of awkwardness. None.

The movie is a flawless burst of funny and entertaining arousal with plenty of innuendos, make-up, sex, champagne Jacuzzis, and nut-hugging swimwear. It is massaged back down to reality with relationship troubles, arguments, the bitterness of excess, and change in feelings. Intervals of belly laughs weave into the story, in particular the petrifying effects of plastic surgery as demonstrated intermittently by Dr Jack Startz, who resembles a post-stroke ken doll. Rob Lowe’s performance of this disturbing face is probably the most entertaining purely for his small variety of strained facial expressions. Dan Aykroyd gives a pretty good (but nothing to write home about) performance of Liberace’s irritable manager, Seymour Heller.

Soderbergh, at first, had trouble with the movie, with sources reporting that Hollywood perceived it as ‘too gay’ thus wouldn’t fund it. It was later signed by HBO on a budget of $23 million, taking only 30 days to shoot. Now, anyone who has seen the film will find that pretty fascinating. The movie as a whole displays mad skill – from the implausible acting, the gentle electrifying cinematography and consistent lucid directing, the ostentatious costumes, to the poignant storyline. The movie was shot in warm rich hues to accentuate the extravagance, with flashbacks in black and white, and camera blur to reflect intoxication and confusion. The budget and filming time makes the movie all the more impressive. A must see!