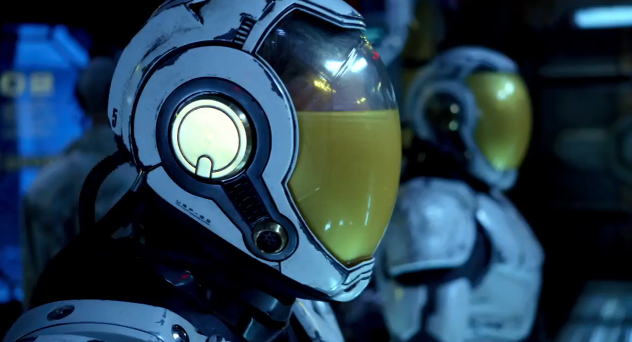 “This was originally intended for only Wondercon, but after listening to so many of you asking for more of the movie online, I think it time for me to show you more footage.
Enjoy, my friends!” – Guillermo del Toro

I’m still a little bewildered how this movie ever got the greenlight, and I don’t mean that in a bad way. I’m a big fan of Guillermo del Toro, its just it has always seemed this movie never should’ve been made. In the sense, who was he able to convince to throw down a huge budget and finally say “okay, let’s do this!”. I definitely want to check this film out in the theatre, but part of me half expects it to bomb, but at the same time really doesn’t want it to. Maybe it’s just a lot of apprehension. In the end, it’s almost like an Americanized version of Neon Genesis Evangelion.

But I am also thinking, it could be a film del Toro uses/absolutely needs in order to prove himself, for some studio to greenlight his Mountains of Madness film, which many were apprehensive about due to his insistence of an R-rating. And because that project was cancelled or shelved, Pacific Rim was the movie made instead. Yet all of this was part of the reason why he didn’t want to be tied up directing The Hobbit for as long as it would take. However, that’s where my overall intrigue lies though, this uncertainty of everything surrounding Pacific Rim and how somehow, it was just made and will be coming out this July.

This footage is the first ‘real’ glimpse of the storyline and actual fighting between giant monsters versus giant robots. The previous footage/trailers showed were glimpses, so do check this footage and sound off below!