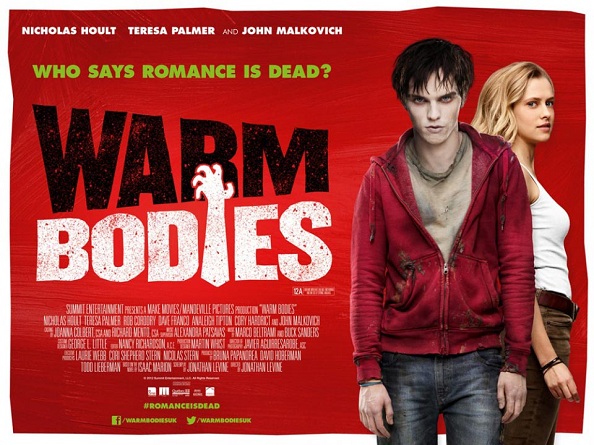 Synopsis: After R (a highly unusual zombie) saves Julie from an attack, the two form a relationship that sets in motion a sequence of events that might transform the entire lifeless world.

Warm Bodies seems to be the zombie version of Twilight with a (thought to be) evil male lead (Hoult) falling for a girl that resembles a blonde version of Bella (Palmer) from her facial expressions to her awkward mannerisms. The film even comes from the same studio (Summit Entertainment) as Twilight. When taking into account all of these factors, it builds a preemptive expectation that this film will be the zombie version of Twilight. So is this film just a Twilight clone that substituted vampires with zombies? No it is not. While it shares the similarities of having a supernatural love interest and his incessant need to protect her, the film’s subtle and dry comedic moments make the cheesy dramatic elements much more tolerable and sometimes very enjoyable.

Apart from the Twilight comparisons, the film had a plot that made it its own. The comedy and drama were inconsistently spread throughout the film but in a good way. It kept me on my toes by not letting me focus too much on the drama or too much on the comedy, which could have spoiled the film if it had to rely on just one. For me, it felt like just as it was getting too serious they threw a little humor in to reset my focus and remind me where my focus needs to be. I enjoy when a film like this gives the audience direction because this film is not a thinker and the audiences’ hands should be held throughout the movie telling them how and when to feel. At a purely entertainment level, the plot is enjoyable and the character interaction between the leading roles is interesting. It kept my interest the entire time as I wondered how their relationship would develop and how the main character, R, would evolve as a zombie. With other zombie films we don’t see the possibility of them adapting to live among humans which brings a new “what if” element to this film in regards to the zombie characters we know.

For the overly critical zombie lovers (myself included), I would say that there a quite a few moments that you could get a bit critical on. The main thing that I immediately noticed was the ineffective “zombie walk” that has been done in so many zombie films but disappointed me in this one. The film opens with R (Hoult) walking in a manner that is more like a tired man than a zombie. I would have initially chalked it up to it just being this film’s definition of zombies, but as you can see in the trailer the zombie mannerisms are inconsistent as they have a dead walk one moment and a “tired” walk the next. Not only do the zombies have inconsistent movement, they also have the knowledge to operate things such as doors and small mechanical things. This makes me think of them more as cavemen than zombies. My suggestion for the audience would be to not go into this film being excited about zombies and a post-apocalyptic world, because this film’s definition of zombie is something different than what we’re used to.

Overall I liked this film. Despite my critical nature towards the zombie aspect and pseudo science behind zombies, the film presented zombies in a unique way that has not been done before. This film’s concept of a post-apocalyptic zombie world is interesting and stands out among the rest while providing some key laughs and unique characters creating an overall enjoyable film.

An interestingly funny take on zombies