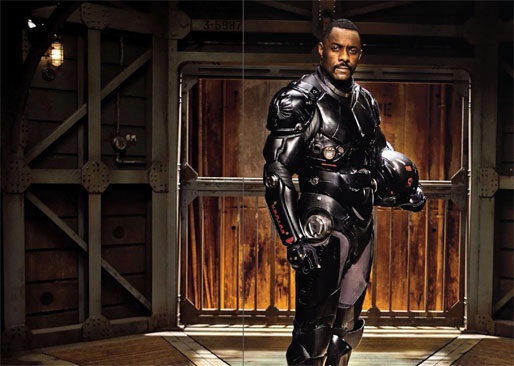 Someone must be twisting Guillermo Del Toro’s arm to start building buzz for his next film ‘Pacific Rim’ because not only did he finally talk about the project recently but now we have our first look at Idris Elba in some type of armored suit costume in the movie. Check it out: That’s an interesting suit the man has on. The premise of the film already reminded me of the anime series Evangelion but this gives us a bit of insight in some of the costume design and seems to follow the trend of Hollywoods recent fascination with 90’s anime inspired design. It’s an interesting shot and leaves me to wonder why he needs such an outfit. Is he a pilot? What is he piloting? Can he see out that helmet in his hand? This is waaay too early to start doing this to me Guillermo. Clearly you’ve studied Ridley Scott’s book of film promotion by starting early. Clever. Veeeery clever.