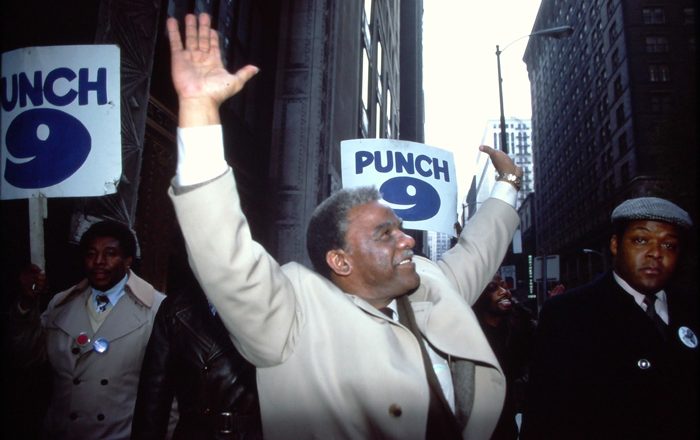 There have been plenty of Chicago   documentaries screening at the festival, one of which, “Punch 9 for Harold Washington” had its World Premiere during the festival.

Joe Winston directed and produced the documentary Push 9 for Harold Washington, which gave viewers an in-depth look at the first African American Mayor of Chicago, Harold Washington. The film details how Washington prevailed in the February 24, 1987 Democratic mayoral primary over incumbent Jane Byrne, who had succeeded 20-year Mayor Richard Daley, by 7.2%, with a final tally of 53.5% to 46.3%. In a Democratic town like Chicago, the Democratic primary is tantamount to the Mayoral election.

For me, seeing a very young Barack Obama in the background of one shot, watching Washington intently, spoke volumes about the impact this man and this election had on the trajectory of national politics. There is also a quick clip of Obama giving credit where credit is due, to Harold Washington, the eloquent candidate who stood up and said, “We’re not anti-anything. It’s our turn.” At another point, Washington says, “We are right. We are ready.”

Mayor Richard Daley, “the Boss,” reigned from 1955 to 1975. There is not a person who follows politics that doesn’t know about the Democratic National Convention fiasco in Chicago in 1968. Local cinematographer Haskell Wexler even made “Medium Cool” in the streets of our rioting city.

Things weren’t a whole lot quieter after Mayor Daley died on 12/20/1976. Jane Byrne would rise to power, and, in a city where 87% of the housing occupants are Black, she would appoint three white people to the housing board. Mayor Byrne would move into Cabrini Green housing projects in a ploy to woo back the defecting Black voters who had helped install her in office and now felt she had not kept her promises, but that was a stunt that didn’t  work. (Without Jane Byrne in office, would any other Mayor have greenlighted “The Blues Brothers” with as much freedom as that film had to do as it pleased? As a film afficionado, that part of her tenure you have to like.)

On November 10, 1982, after much wheedling and convincing from the community, Harold Washington announced that he was running for Mayor. Before he made the announcement, he laid down conditions for his run, which included the Black community’s need to register 50,000 new voters and to build up a $100,000 war chest. As he said during a speech: “We have 670,000 Black registered voters. We need 450,000 to elect.”

Everyone seemed to climb on the Harold Washington bandwagon. He was inclusive in inviting Hispanic voters to join him in his fight. Everyone from Coretta Scott King to Rosa Parks and every celebrity in-between turned out to support Washington. Even the Michigan Boulevard Women’s Association (i.e., the prostitutes who worked Michigan Avenue) contributed.

During the campaign, blatant racism emerged. The candidate the Republicans proposed was Bernard Epton and the race got dirty fast. As Washington, himself, said, “It’s tough being a black man in the land of the free and the home of the brave.” Even Vice-President Walter Mondale, who came to town to attend church alongside Washington, was stoned by an angry mob as the duo approached the doors. The Republican candidate’s son, Jeff Epton, tearfully asks of the camera, “What have you done, Dad?, bemoaning the racial epithets and downright hostility that Harold Washington’s candidacy evoked. Valerie Jarrett, a former Obama aide, points out that this undercurrent of racial animosity still exists and emerged on the national scene pre and post-Obama’s terms. This film, in the light of George Floyd and the Black Lives Matter movement, is very timely and very prescient.

Things didn’t get any better when Washington attempted to rule over the City Council, leading to what were dubbed “the Council Wars.” Chicago was called Beirut on the Lake. Challenged by the son of Richard Daley and former Mayor Jane Byrne, Washington would win the Democratic primary for re-election  by 80,000 votes, racking up 36.7% of the vote to Byrne’s 33% and leaving the later Mayor Daley (Jr.) in third place.

It’s a well-done, exciting, upbeat documentary, with commentary from David Axelrod, Rahm Emmanuel, Jesse Jackson and brief appearances by many national figures, all of whom were watching what unfolded in the Windy City.

The death of Harold Washington on November 25, 1987, from a massive coronary was a very sad day for most of the participants interviewed for this documentary.  [Interestingly, Washington’s opponent in the 1983 general election, Republican Bernard Epton, would die just 18 days after the Mayor, on December 13th, 1987.]

The musical selections near the end, “Been holdin’ on too long to let go” and “Some things take a lifetime” underscore the poignancy of this look at Chicago politics of the past, and of the future, as Mayor Lori Lightfoot speaks on April 2, 2019, as the first Black female mayor of Chicago and encourages all of the city’s youth to set their sights high, because they, too, could grow up to be Mayor of Chicago.