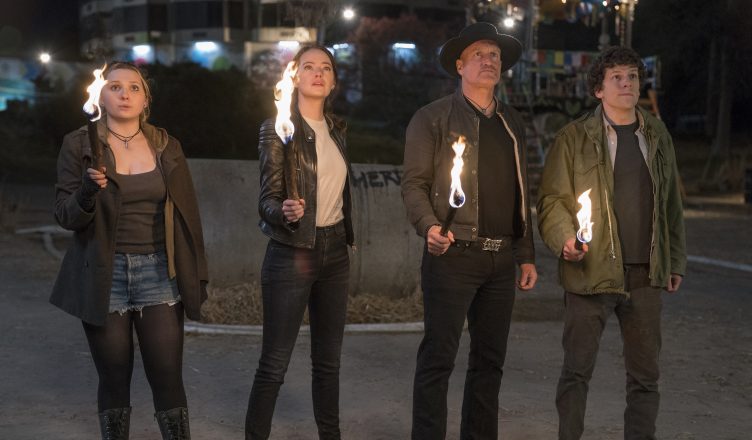 “Zombieland: Double Tap” opens today in theaters. Right from the opening credits, you know you’re in for more  irreverent humor a la 2009’s “Zombieland”. It starts with the Columbia lady on her pedestal with the torch using her torch to defend against two zombies attacking her. There is also a voice-over from Jesse Eisenberg, thanking audiences for choosing this form of zombie viewing from the many available.

So, we’re on Zombieland Air, and the bar is set low enough, as one critic said, to step over it handily. This is a continuation of the fearsome foursome that roamed the Apocalyptic land in 2009, with Woody Harrelson as Tallahassee, Abigail Breslin (“Little Miss Sunshine”) as Little Rock, Emma Stone as Wichita and Jesse Eisenberg as Columbus. To that original cast, add Rosario Dawson as Nevada, new girl Zoey Deutch as Madison, Avan Jogie as Berkeley, Luke Wilson as Albuquerque and Thomas Middleditch as Flagstaff. The cast even includes WWW fighter Michael Wilkerson as a T800 zombie (“new and improved” zombies). Keep in mind that in the intervening 10 years, Emma Stone has actually won an Oscar (“La La Land”) and all three of her partners in this film (Harrelson, Breslin and Eisenberg) were Oscar nominees.

The film is basically a straightforward road trip, with stops along the way at the abandoned White House, a similarly abandoned mall, Graceland, an Elvis-themed motel near Graceland, and a hippie compound called Babylon, where all guns are melted down to make peace symbols. The search is on for Abigail Breslin’s character, who has split with a Berkeley musician who is a pacifist (much humor mined there.) There’s even a cameo post-film with Bill Murray being Bill Murray in a room full of zombies, armed only with a metal folding chair. (Don’t leave before it screens). More tongue-in-cheek humor.

Newcomer Madison, the blonde Valley Girl played by Zoey Deutch, is a welcome comic relief addition. The screenwriters (Dave Callahan, Rhett Reese and Paul Wernick) previously scripted the snarky dialogue for Ryan Reynolds in the “Deadpool” franchise; (Wernick wrote “Venom”) and the director of “Zombieland: Double Tap,” Ruben Fleischer, reprises his directing duties from the first 2009 film. When Madison is first encountered at an abandoned mall, Harrelson asks her if she lives there. Her answer? “No, Paul Blart.”

On Opening Night of the Chicago International Film Festival after-hours offerings the theater was sold out; the audience left satisfied. For those who want a steady diet of head-bashing, there are plenty of fights to keep them entertained. This night there was even a zombie costume contest, with a Tallahassee look-alike winning from among five local entries.

Some of the lines that the addition of the new blonde airhead enables were priceless. Most viewers will have seen the trailer clip where Woody tells Eisenberg that they should hit the road again and leave Madison behind (she had been hiding out in a freezer in the abandoned mall). When Eisenberg protests that Madison shouldn’t be left behind because the zombies will get her, Woody responds, “Zombies eat brains and she ain’t got any.” The scene where Woody gets out of the mini-van that he loathes, ostensibly to load massive quantities of Madison’s pink luggage into the back is great. He waits until she re-enters the car, then gets behind the wheel and drives off, leaving all Madison’s luggage on the road, while the “rule” that Columbus has created about “traveling light” is flashed on the screen. Woody, in typical Harrelson manner, says, “Rules are for pussies.” There is also this line, “If you love something, you shoot it in the face so it doesn’t become a blood-sucking monster.”

The airhead blonde worked well, thanks to new-comer Zooey Deutch (television’s “The Politician”), but the new duo of Luke Wilson and Thomas Middleditch as Albuquerque and Flagstaff were not as amusing. The joke is this: the two, who drive a gigantic vehicle referenced as Big Fat Death, are doppelgangers of Woody and Jesse’s characters. They have the same annoying mannerisms, down to a close resemblance, physically, of Middleditch to Eisenberg. (They don’t last long in the plot, so there’s that.)

This is not a movie that requires advanced degrees to understand, nor does it have any connection to reality. The zombie genre, complete with television’s “The Walking Dead,” was just beginning to become ubiquitous in 2009 (“The Walking Dead” premiered in 2010), but the market has become considerably more saturated in the ensuing ten years. Some viewers enjoy the zombie head-bashing more than others, from my own personal experience. But it is a genre that is now entering season 10 on television, so it’s  well-established. (And, yes, I realize that “Night of the Living Dead” goes all the way back to 1968 and George Romero—who died in2017—mined this vein long before anyone else.)

Overall, fans of the original film and the zombie genre in general will be pleased. You don’t have to think very hard as you enjoy this salute to brain-dead zombie lore. It’s a quintessential popcorn movie and that is what a lot of us in this country need right now.