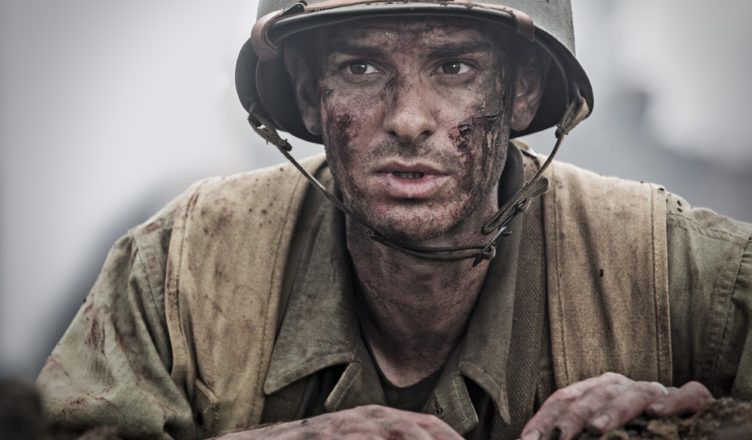 Mel Gibson’s first directorial effort in 10 years (since 2006’s “Apocalypto”) is “Hacksaw Ridge,” the true story of conscientious objector Desmond T. Doss, a 7th Day Adventist who served as a medic in WWII in Okinawa and elsewhere in the Pacific Theater. As Gibson said, “He was an ordinary man doing extraordinary things under the most difficult of circumstances.”

Gibson went on to explain that, in one 12-hour period, Doss saved 75 men and subsequently was awarded the Congressional Medal of Honor by then-President Harry S. Truman. Some say Oscar could come calling. I’m not one of them, but all things are possible in this era of Marvel Comic book movies and Andrew Garfield does do the role justice.

I was reminded of Mel Gibson’s arrival on the scene starring in “Gallipoli” in 1981, when he was only 25. Of that film, a war movie in which he starred as Irish-Australian soldier Frank Dunne, Mel said, “It’s not really a war movie. That’s just the backdrop. It’s really the story of two young men.” (*Note: Mel cast his 6th child, son Milo, age 26, as Lucky Ford in the soldiers-in-the-barracks “Hacksaw Ridge” scenes.)

We could say the same thing of “Hacksaw Ridge” and call it a film about faith or a movie about true love, but the battle scenes are what you’ll remember. (I can’t think of another film where 9 people were listed as “flame and fire technicians;” there is also a credit for a “flame compositor.”) 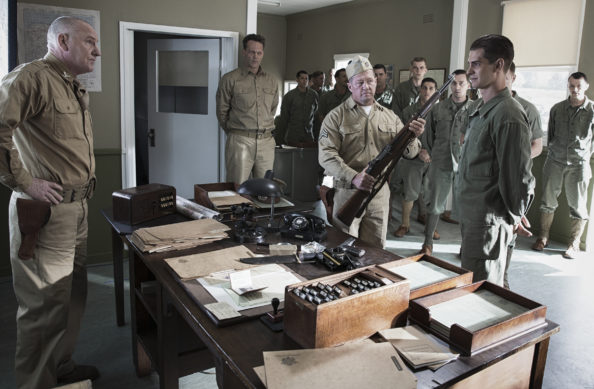 In November of this year film critic Matt Zoller Seltz described Gibson, who won an Oscar as Best Director for “Braveheart” in 1995 (a film in which he also starred) as “the pre-eminent religious filmmaker in the U.S.”

This film certainly falls into the religious category, as Andrew Garfield re-enacts the heroism of Seventh Day Adventist Conscientious Objector Desmond Doss, who, as Gibson described Doss’ character “honed his spirituality while he was in hell. He never lost his equilibrium. He stayed true to himself.” Doss was the first Conscientious Objector to be awarded the Congressional Medal of Honor by President Harry S Truman and one of the best things about the movie is the opportunity to see and hear the real Desmond T. Doss speaking to us at the end of the film. (He died at 87 in March of 2006.) We also hear from one of the men he saved, the real Captain Jack Glover, in archival footage. (Doss’ humility is a refreshing change in the closing days of Donald Trump’s presidential run). 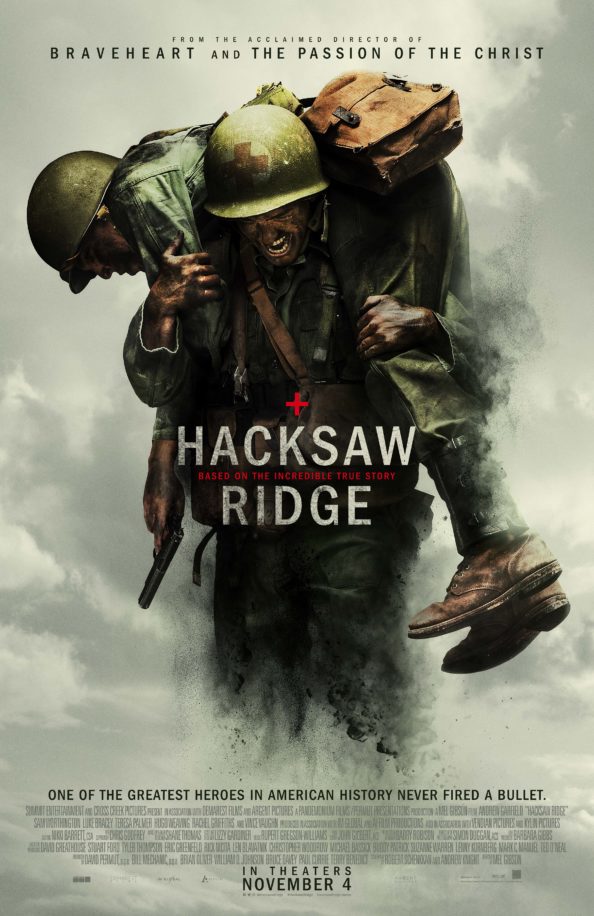 I learned from Gibson’s Oscar-winning effort in directing “Braveheart” or his 2004 film “The Passion of the Christ” that you need a strong stomach to sit through Gibson’s cinematic vision(s). Often, his films involve non-stop violence. It would be good to remember that fact when selecting a movie for the weekend (the film opened wide on November 4th.)
From the first shot of soldiers on fire, there are numerous lengthy scenes of hand-to-hand bayonetting, one memorable scene of decapitation, lots and lots of fire (and rats….Mel likes fire and rats), grenades blowing people up and more gory mayhem.

The violence and depiction of bodies blown up or set on fire or decomposing/bleeding/blown apart are some of the lengthiest and goriest battle scenes this side of “Saving Private Ryan’s” D-Day invasion. Michael Philllips of the Chicago “Tribune” said something to the effect that it might be the goriest religious movie ever made. But, then again, we’ve got “The Passion of the Christ,” and it’s rumored Gibson may direct a sequel to that savage cinematic gem (the highest-grossing “R-rated” film made.)

Most critics compared “Hacksaw Ridge” to “Saving Private Ryan” with its D-Day Normandy Beach re-enactment. Some mention the more recent “American Sniper,” Clint Eastwood’s 2014 film with Bradley Cooper. No one brought up “The Hurt Locker” or the two I kept being reminded of, which were Clint Eastwood’s 2006 films “Flags of Our Fathers” and “Letters from Iwo Jima,” films shot from both points-of-view: Japanese and American.

Perhaps I felt that way because Okinawa seemed much more like the Iwo Jima of Eastwood’s 2006 films. There is a jarring shot, underground, of a Japanese soldier (Hoshi Kosuga) who, defeat imminent, has hanged himself. Desmond stumbles onto the corpse without warning. It’s like the scary moment in a horror movie in its unexpectedness: the hand reaching up from the grave in “Carrie;” the quick flashes of horrific visions in films like “The Conjuring” (or this coming December’s “The Autopsy of Jane Doe.”)

Viewers are also treated to shots of two Japanese officers, deep underground in tunnels, committing Japanese ritual seppuku (suicide by disembowelment) as impending defeat looms.
So, don’t say I didn’t warn you, if you are faint of heart (or stomach).

The film intercuts the lengthy scenes of soldiers bayoneting one another (and setting fire to one another—don’t forget the fire) with family background about young Doss as he grows up (young Desmond is played by Darcy Bryce) with young brother Hal (Roman Guerriero) and an alcoholic, abusive father (Hugo Weaving of “The Matrix”) who has PTSD following his service in WWI at Belleau, France. Doss, Sr., occasionally physically goes after Desmond’s mother (played by Rachel Griffiths, the nymphomaniac from television’s “Six Feet Under”) in his alcoholic rages. 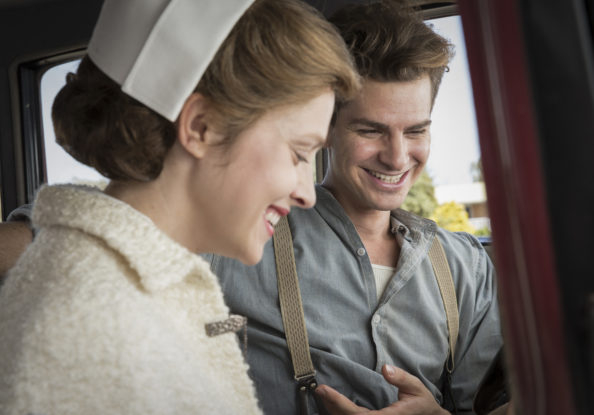 In an almost-too-chaste-to-be-true romance, Desmond meets and falls in love with Dorothy Schulte, the woman he will marry (played by Teresa Palmer) when he accompanies a young accident victim to the hospital where she is a nurse. Thanks to Desmond’s good instincts in applying a tourniquet to the severed artery in the boy’s leg, the young accident victim survives and Desmond’s lifelong interest in medicine is born. He decides he will volunteer to be a medic, but he will not bear arms. As Desmond says, “While everybody else is taking life, I’m going to be saving it.”

Only an actor as good as Andrew Garfield could make this part believable. In less certain hands, it could have been mawkish, overly sentimental or just plain bad. Corny is the word that comes to mind. But Andrew Garfield is a fine young actor and, as one of the film’s producers, Bill Mechanic, said, “Some people have said that this film does what films used to do—tells a story and lets people see it the way they see it.”

Some of the lead-up to the intensely violent battle scenes seems overly saccharine. The romance with Dorothy Schulte (Teresa Palmer) falls into that category. It’s very old-fashioned. Also, the training scenes are not very fresh, with tough-talking drill sergeant Vince Vaughn cast as Sergeant Howell. At one point, during rigorous training, Vaughn has to utter the line, “We’re not in Kansas any more, Dorothy.” Blame the screenwriters (Robert Schenkkan and Andrew Knight.)

The cast of disparate fellow soldiers took me back to “the old days” of war movies with character actors like Aldo Ray who played these parts, over and over, in war movie after war movie. There’s one soldier of every ethnicity; someone for everybody. Ninety-year-old comedian Don Rickles even received praise back in the day (starring alongside Clint Eastwood, Telly Savalas, Carroll O’Connor and Donald Sutherland) for his 1970 screen appearance as a character named Crapgame in “Kelly’s Heroes,” another war movie peopled by old-fashioned stereotypical cardboard cutout soldiers. But screenwriters Robert Schenkkan and Andrew Knight get the blame (or credit) for the sometimes sappy dialogue, most of which is assigned to Vince Vaughn. (I kept remembering Vaughn as “Fred Claus,” Santa’s bitter older brother, in that 2007 movie, so I was prepared to laugh at almost any dialogue assigned Vaughn, without blaming him for the misfortune to be known for silly comedies as much or more than for serious roles.)

If you can take the nearly unremitting violence, Andrew Garfield’s performance is worth the price of admission. Shooting on a budget of only $40 million, (one-half of the budget for “Braveheart”) in Australia, and over only 59 days, Gibson has told the story of a real war hero. As Gibson described Doss’s exploits, apparently the director didn’t even use a scene that was true-to-life but judged to be just too much heroism for one real-life man.
Doss, who is being carried off on a stretcher with a wound, kept getting off the stretcher to rescue others nearby. Gibson did a good job of making war seem like Hell on Earth and, as he said, he had to do it on a budget because, “If you’re not wearing spandex today, you don’t get a big budget.”

Sadly, in the Marvel world, too true. (Who cares about a real war hero when we have Captain America?)