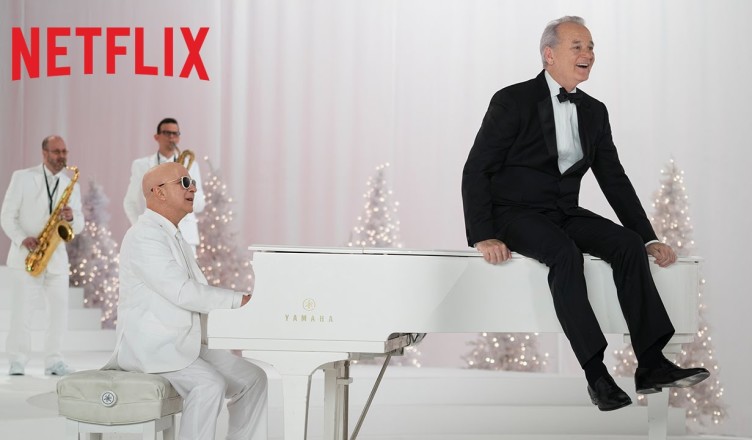 This winter, Bill Murray brings an extra-special dose of holiday cheer to Netflix with the premiere of an all-star musically-driven holiday special, A Very Murray Christmas. Set inside New York City’s iconic Carlyle hotel, A Very Murray Christmas opens with Murray preparing to host a live, international holiday broadcast. After a blizzard shuts down the production, he makes the best of the situation by singing and celebrating with friends, hotel employees and anyone else who drops by.

A Very Murray Christmas is a lot like the day it’s celebrating. It’s something that was exciting to look forward to, anticipated, and then over all too soon. The build up to release was perfect and had me looking forward to December 4th a lot like we look forward to December 25th and before I knew it things were winding down. This Netflix holiday special clocks in at about an hour in length and follows Bill Murray in an adventure in which he’s trying to put together a live Christmas musical with a ton of guests to celebrate the holidays on television. It’s a fun Christmas movie that absolutely belongs on your TV during the holidays and is completely rewatchable after initial viewings. The acting seems spot on, the singing is even better, and more importantly is that it’s a really funny movie. Bill plays himself in this tongue-in-cheek role and the story seems like a classical Bill Murray comedy with the premise revolving around a Christmas Special, (within the film), led by Bill Murray falling apart due to a blizzard in New York City and causing most of his guests to no-show. Stuck at his venue on Christmas Eve, what’s a Bill Murray to do alone with a bunch of other stranded guests? This alone probably makes your imagination run wild and it’s as fun as you can imagine. Murray doesn’t have to really ‘act’ too much since he’s playing himself and his wit and humor seem spot on wiht the man in real life. There are times he says things with such ease that you have to wonder if there was a script of is he’s strictly going by ad-lib.

The film has a few comedians sprinkled throughout to help support Murray in this movie but are absolutely cameo’s at best. Each supporting star leaves just as sporadically as they arrive but they leave a helluva impression before they go. Chris Rock singing a Christmas duet with Bill Murray is as bizarre as it sounds but man is it funny. You wouldn’t guess two see these two together considering their contrasting comedic styles but they find a way to make their brief pairing interesting. The only odd casting I found was Miley Cyrus, was Mariah busy? She’s not as distracting as you may fear but didn’t really add anything either.

Overall it’s a fun movie worth watching during the Holiday season. For classic Bill Murray fans this is him at his wittiest. He is noticeably paired with newer comedians to try to create some chemistry and while some pairing are better than others, like his scenes with Tina Fey and Amy Poehler, but overall it works. OH! And it has George Clooney! He’s a citizen of the world.