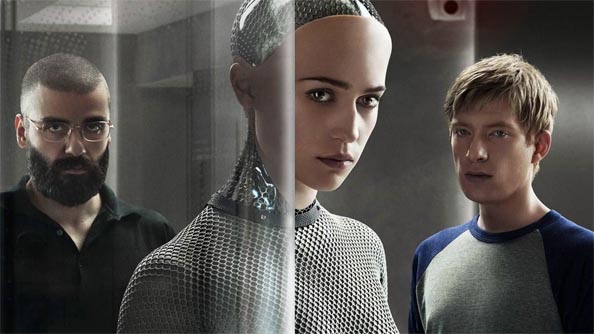 Synopsis: A young programmer is selected to participate in a breakthrough experiment in artificial intelligence by evaluating the human qualities of a breathtaking female A.I.

The concept of Artificial Intelligence has been done so many times in film. Whether it be a destructive force like Terminator or a social misunderstanding like Steven Spielberg’s A.I., Hollywood enjoys employing A.I. as a sci-fi element in film. While the A.I. presence is so common, the film Ex-Machina presents this concept in an imaginative way that is thought provoking and brilliantly suspenseful.

Filled with an A-List cast consisting of upcoming Star Wars VII cast members Oscar Isaac and Domnhall Gleeson, Ex-Machina resonates with both cinephiles and sci-fi nerds alike. The film provides an intimate setting for these actors to flourish as they discuss their feelings regarding the A.I. robot Ava played by the beautiful and seductive Alicia Vikander. The triangle between the three sets the film up for a continuous game of suspense, betrayal, and intrigue as all three characters continually influence one another in different ways leaving it up to the audience to make their judgement on who is right and who is wrong. The amazing performances from all three actors supplements the rich character development that connects you to all of their feelings throughout the film. While Ava and Caleb stay steady on course with their development, Nathan is a bit of a wild card and his character allows Oscar Isaac to shine as the breakthrough performance among the three

Outside of the stimulating characters, there is also a stimulating amount of technology driven concepts that will wow the science enthusiasts viewing the film. The concept behind building Ava (the A.I.) is based on a lot of technologies that we know today. Because of this Ex-Machina exudes strong social significance with insinuations of a tech company being Google and using data illegally to create a map of the human brain. For those conspiracy theorists out there, the concept of privacy rights explained by Nathan could have you putting on your tin foil hat a little bit earlier than expected. The means through which Nathan creates Ava is both unethical and illegal, but the final product is quite amazing.

Morality is explored even further after the creation of the A.I. being. The idea of creating a conscious creates a sort of God complex within Nathan which leads him to question the flaws of Ava without acknowledging his own flaws that tend to make him weaker than he knows. Throughout Ex-Machina the moral compass is continually spinning and never once directs the audience to emotionally respond a certain way. Because of this, I felt that the film surpassed a majority of other films by acknowledging the audience’s ability to decide for themselves rather than holding their hand throughout the film.

Overall I found Ex-Machina to be one of the most engaging sci-fi films that I have seen in many years. With a certain layer of ambiguity reminiscent of Stanley Kubrick combined with layers of an ominous setting, intriguing characters, and a suspenseful plot, this may be the most well rounded sci-fi film that you will see this year. With this being Alex Garland’s directorial debut, I think he entered the role with quite a bang. I highly recommend this film and encourage others to add this to your must see list among the plethora of Summer blockbusters that may take up a majority of your time.